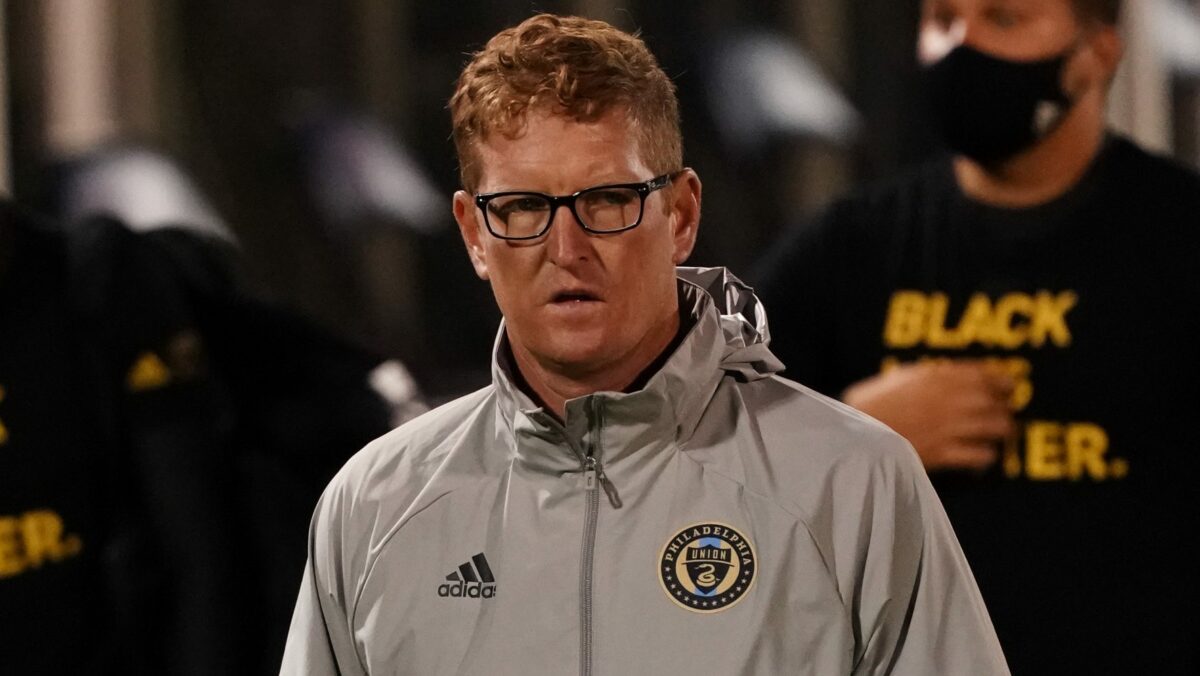 Jim Curtin helped the Philadelphia Union improve in each of the last three seasons and the club’s success in 2020 saw him awarded the highest honor for a head coach in MLS on Tuesday.

MLS awarded Curtin the Sigi Schmid Coach of the Year award after the Pennsylvania native beat out Oscar Pareja and Greg Vanney for the yearly honor. It was the first time that Curtin won the award and it seemed fully deserved after he led the Union to a first-ever trophy in club history, the Supporters’ Shield.

“Again, it’s been a week where we’ve had a lot of individual accolades, which we’re very proud of at the club for sure,” Curtin said Tuesday in a conference call. “But it’s important to keep the guys all focused, humble and hungry. And it’s really something we’ve preached all year, that as the team has success and gets points and gets wins and lifts the trophy, the individual accolades will come.”

“That’s something that we’ve stressed all year. It’s come true now. But we still don’t want to get caught up reading the headlines, because there’s still a lot of work to do. We’ve set ourselves up and worked so hard to get home field advantage throughout the playoffs.”

Curtin was at the forefront of struggles in his early stages as Union head coach, but the club’s ownership stuck with him and it paid off over the past two seasons. In 2019, the Union won a first-ever playoff game in club history, downing rivals New York Red Bulls 4-3 before reaching even new heights in 2020.

Despite COVID-19 impacting parts of the regular season, the Union reached the semifinals of the MLS is Back Tournament in the summer before clinching the Supporters’ Shield at Subaru Park on November 8th against the New England Revolution.

While many head coaches could’ve been let go during the struggles, Curtin praised the development of the club as a whole and sticking by its beliefs.

“I think it’s a lesson for for all of pro sports. I think if you even look across the franchises that tend to stick with a belief system,” Curtin said. “You could even throw in NFL, the Patriots, I know we hate saying that in Philadelphia, the Pittsburgh Steelers where there’s not a ton of turnover and change.”

“It does take a real belief in what you’re doing, it takes time over years to implement a system, and also create an environment where players like I talked about before can can improve and get better. As a coach, you’re nothing more than a teacher, your job is to watch players grow and get better in the environment that you create. And then my biggest reward is watching them improve.”

Curtin joined goalkeeper Andre Blake as the latest Union member to capture a regular season award, while Blake is also up for the league’s MVP award. Defender Mark McKenzie is also a finalist for the Defender of the Year and could be the third Union member to win an award, should he beat out Walker Zimmerman and Jonathan Mensah.

The Union head into the MLS Cup Playoffs as the overall No. 1 seed and will face the lowest-seed remaining after this weekend’s Eastern Conference play-in round. Even after going unbeaten (9-0) at Subaru Park this regular season, Curtin is aiming to maintain his team’s aggressiveness and consistency heading into a tricky opening round tie against either Montreal, Inter Miami, or New England.

“It almost feels like a bye but it’s not quite a bye,” Curtin said. “So again, what will happen is we can play one of three teams — Montreal. New England or Miami — all really tough different opponents that present a lot of different challenges with their groups.”

“But what does happen now is, whoever we play is going to be coming off of a win, which always builds confidence they will have a little more sharpness and out of that 90 minutes under their belt. So it is a tricky situation for us and for Toronto in the Eastern Conference so we’re just trying to keep guys as sharp as possible. You’re guarding against that letdown.”