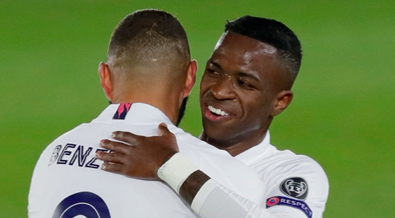 Real Madrid coughed up a two-goal lead, but did enough in the end to down Inter Milan for its first win of UEFA Champions League group stage play.

Los Blancos held on for a 3-2 victory at home after Rodrygo’s 80th minute finish sealed the deal against the Serie A visitors. The win extended Los Blancos four match unbeaten run in all competitions.

Zinedine Zidane’s squad rolled to a 2-0 lead after 33 minutes thanks to goals from Karim Benzema and Sergio Ramos. Achraf Hakimi’s poor back pass allowed Benzema to steal possession before rounding Samir Handanovic and tapping into an empty goal.

Ramos doubled the lead with a header past the veteran goalkeeper after great service to the back post from Toni Kroos. However, Antonio Conte’s side would hit back before halftime to cut the deficit as Lautaro Martinez’s poked effort beat Thibaut Courtois.

Inter tied things up in the 68th minute as Martinez this time set up Ivan Perisic, who hit a low drive into the bottom-right corner.

Los Blancos looked to be reeling, but a pair of substitutes connected for the winning goal. Vinicius Junior’s dangerous cross was put away by Rodrygo into the top corner which sealed the first three points in this season’s competition for Real Madrid.

Diogo Jota registered his third-career hat trick in only his eighth European appearance to propel the Reds, whom also saw Mohamed Salah and Sadio Mane score in Bergamo.

Jota needed only 16 minutes to break the deadlock as Trent Alexander-Arnold set up his teammate, allowing the forward to chip Sportiello from close range. The in-form Portuguese attacker doubled his tally in the 33rd minute after Joe Gomez’s free kick was brought down by Jota, before he struck once again.

Salah added to the lead in the 47th minute after a dangerous counter attack by the Egyptian before Mane chipped Sportiello for a fourth of the game for Liverpool.

Jota capped off his perfect performance in the 54th minute after Mane’s cross was once again brought down by the forward and tapped past the Italian.

Liverpool has yet to concede in group stage play and now faces Manchester City in an highly-anticipated league clash.

Ferran Torres scored his second goal in back-to-back UCL starts, giving the Citizens a lead in the 12 minute. After a great pass in towards goal by Kevin De Bruyne, the Spaniard slid a low shot past Jose Sa.

Gabriel Jesus came off the bench to score a second goal for the Citizens, this coming in the 81st minute. After picking up a pass from De Bruyne, the Brazilian ripped a shot from a tight angle into the roof of the net.

Joao Cancelo capped off the impressive win with a fine left-footed strike. Felix Nmecha set up the right back, who beat Sa to the bottom left corner.

Man City sits top of Group C heading into this weekend’s clash with Liverpool at home.