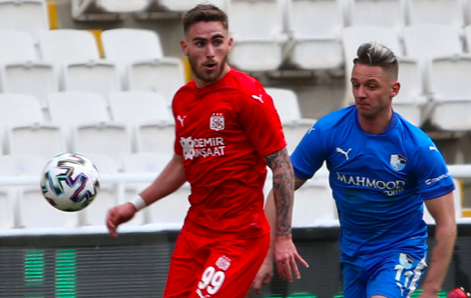 Tyler Boyd’s second league goal for Turkish side Sivasspor played an important part in the club earning a 2-2 draw with second place Galatasaray on Sunday. It also helped his parent club Besiktas, who now sit top of the Super Lig table because of Sunday’s result.

Boyd got the start on Sunday and got to celebrate as his team picked up an important road point. The U.S. Men’s National Team winger took advantage of a defensive miscue by a pair of Galatasaray defenders on a corner kick, and tapped home to put the visitors ahead 2-1.

Boyd would played 89 minutes in the road draw, continuing to rack up minutes on loan at Sivasspor. After not being chosen by Besiktas manager Sergen Yalcin for the first half of the season, Boyd was loaned out in the second-half in order to get minutes elsewhere.

While his parent club edges closer to a league title, Boyd did not hide his excitement post match for his role in Galatasaray dropping two points.

“This match was very important,” Boyd said to reporters. “It was as important for Beşiktaş as it is for Sivasspor. We have earned points for Sivasspor, I am very happy.”

“It was a tough match because our opponent is a tough opponent, the field conditions were also difficult. The toughness of the field makes your muscles even heavier. Today, we fought very well as a team and achieved a tie.”

Besiktas sit two points ahead of Galatasaray in the table with a match in hand over their rivals. There is still plenty to play for between both clubs, while Sivasspor sit eight points clear of the relegation zone and are 17 out of the top four places.

Boyd’s long-term future with Besiktas remains unknown, but for now he will continue with Sivasspor in hopes of earning minutes and playing a role offensively.