With questions at the left-back position, Robinson ready to show he is the answer 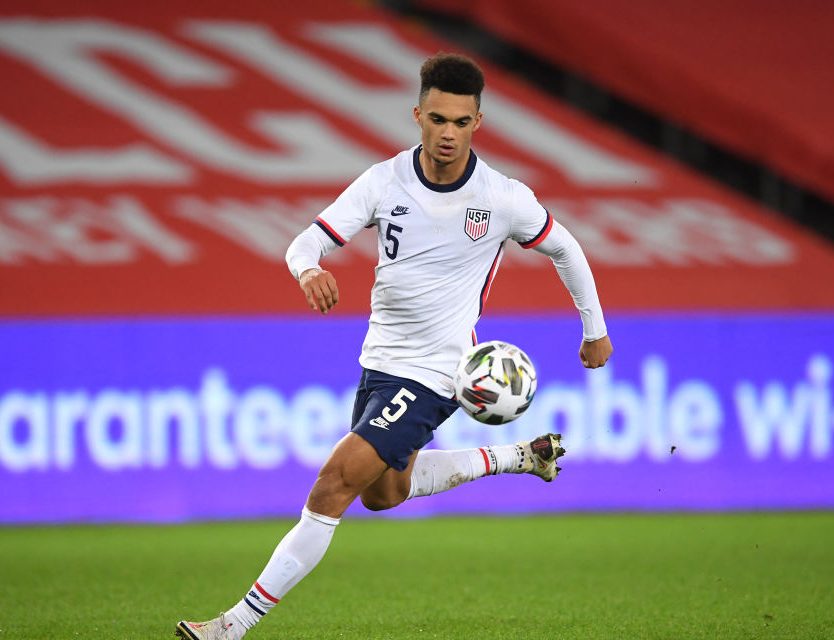 If Antonee Robinson wants to lock down the starting left-back position for the USMNT, he knows he must make the most of the upcoming friendlies against Jamaica and Northern Ireland.

In eight senior appearances for the USMNT, Robinson has struggled to adapt to Gregg Berhalter’s system and there are other current options at the position. Right-back Sergiño Dest is comfortable on the left, doing so against Panama in November and Sam Vines is emerging as a domestic option.

“I don’t think any position seems guaranteed and we’ve got a massive pool of players,” Robinson said Monday. “There might be overpopulation on the right and Sergiño is very constant on the left as well. So everyone’s got to be at their very best to get a shot started in this team. Hopefully, if I manage to perform well in the next few games coming up, then I can try and lock this position down for the tournament (Nations League), and then the World Cup qualifying.”

Facing off against Jamaica for his second time on Thursday, he is eager to show that this time out will be different albeit a friendly.

“Last time I played against Jamaica I wasn’t particularly happy with how I performed in that game,” Robinson said. “I want to write that wrong and put in a performance and that’s kinda my goal for this camp.”

Robinson earned his first senior call-up since November 2019, starting in the 0-0 draw against Wales, but he did not look like a player that features regularly for a Premier League side.

“Against Wales, I don’t think that was a massively strong performance for me,” Robinson said. “Personally, I feel like it was a good opportunity for me to get to a grips with how the team plays and learn about playing with each other.”

At the club level, Robinson is one of the best defenders in the Premier League at going forward, but for the National Team he is asked to be on the ball more and be an asset in possession. He acknowledges that there are many aspects of his game that he needs to refine.

“The main thing that I need to keep working on is more on the technical side or on decision making and retaining the ball, which is something I’m obviously trying to get better at all the time and trying to improve,” Robinson said.

Despite the struggles, Robinson sees himself as a valuable part of the USMNT squad, but admitted that going one year between call-ups made it challenging to adapt to what is asked of him at the international level.

“At the start I feel like it was a big adjustment getting used to international football in general,” Robinson said. “Now I’ve been called up the last few times I’m constantly working on trying to keep myself in this team and contribute to our goal, which is that we want to win as much as possible, and I’m looking forward the opportunity to do that.”

COVID-19 has also impacted the amount of time the USMNT has been able to spend together, and with Nations League and World Cup qualifying on the horizon, Robinson was clear that the vision of the team remains unchanged.

“We want to win trophies, we want to change the way that the world views American soccer,” Robinson said. “All the time is coming up is a very good opportunity for us to prove that we want to be taken seriously. It’s a good team with a chance to win things and there’s a lot of young hungry players.”

For club, Robinson and Fulham are currently in the middle of a relegation battle, sitting in 18th place and in one of the three automatic relegation spots. Having spent time in relegation battles with Bolton and Wigan Athletic in the Championship, the pressure is nothing new for the 23 year-old American.

“We know we are good players and that we are going in the right direction with everything we are working on and that seems to be bearing fruit at the moment towards the end of the season,” Robinson said. “Until it’s impossible for us to stay on, we’re gonna keep fighting towards that. And whether it comes in the next few games or it’s the very last day against Newcastle that we have to battle, stay on, that’s what we’ll do.”