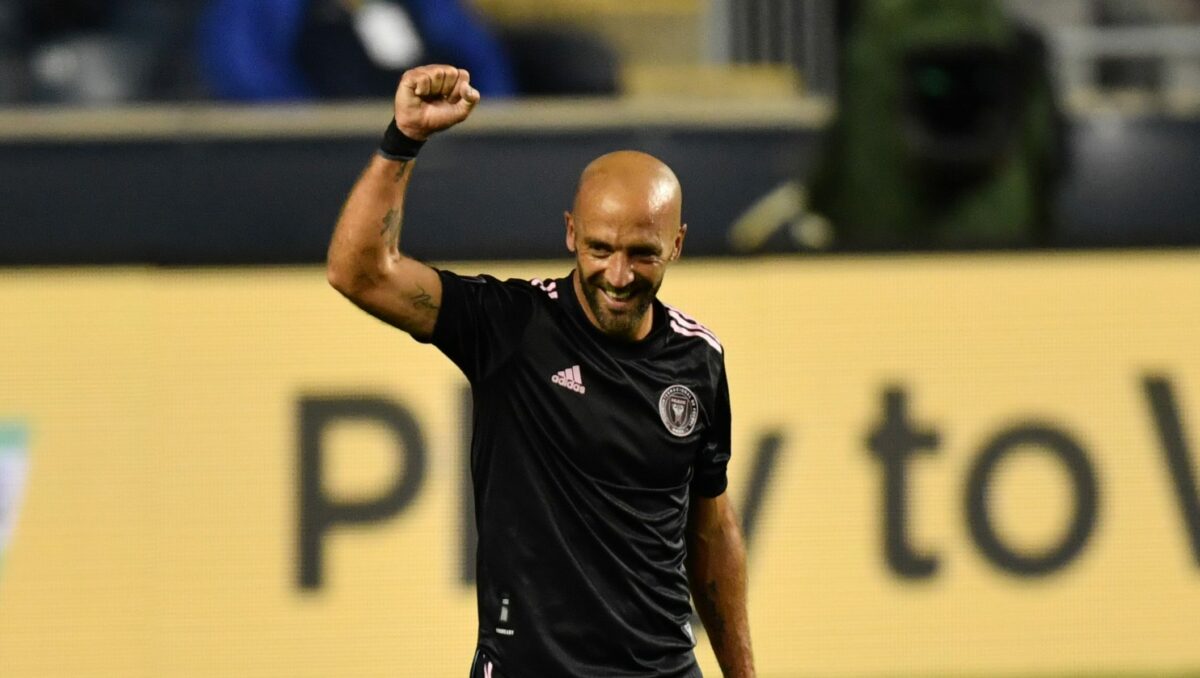 If those who laugh last laugh best, the Higuain brothers might just have a stomach ache right now.

Inter Miami picked up its first win of the season on Saturday night, and it was the combined heroics from Federico and Gonzalo Higuain that helped the team achieve that. The brothers each scored for the Herons in the final 17 minutes of their road game vs. the Philadelphia Union, flipping the script to grab a stirring 2-1 comeback victory at Subaru Park in Chester, Pennsylvania.

The pair of strikes from the Higuains not only gave Inter Miami three points after dropping last week’s season opener, but also marked the first time in MLS history that a pair of siblings found the back of the net in the same game. In the City of Brotherly Love, no less.

Making it all the more enjoyable for the Higuains was that they combined on the 73rd-minute equalizer that sparked the late rally — one that came in Gonzalo’s return to Philadelphia following an eventful MLS debut that saw him miss a penalty kick there last September.

“It is a special moment for them both,” said Inter Miami head coach Phil Neville, who recorded his first MLS win with the triumph. “I think it is the first time brothers have scored in the same game. Federico set Gonzalo up with the first one and Federico scores a brilliant header for the second one. It is a great moment for their family.”

Higuaín ➡️ Higuaín in the city of brotherly love! 😉

Gonzalo Higuaín ties it up for #InterMiamiCF off the assist from Federico Higuain. pic.twitter.com/LxDal3p9hN

“Speaking from real experience, having played with a brother for a long time, there is a special bond when you are in the same team,” added Neville. “Even though Federico and Gonzalo are just teammates, there is a love, there is a bond, there is an understanding.”

That brotherly understanding was on full display on the tying goal, one that gave Inter Miami some sorely-needed life in a match the team was struggling in.

Almost as if they rewound the clock and returned to their days as kids playing together on the fields in Argentina, the Higuains connected when Federico whipped in a pinpoint free kick from the right that Gonzalo nodded home. The star striker proceeded to celebrate with his usual fiery passion, and probably not coincidentally also did the “shh” motion with his index finger in an apparent response to the Union players’ perceived mocking of his inaccurate spot kick in 2020.

“As a No. 10 I always like to provide my forwards and my wingers, (and) in this case Gonzalo tied the game,” said the 36-year-old Federico. “It was very important for us. The goal gave us a lot of confidence to keep battling, to keep pushing, and that is what happened in the second goal.”

The 33-year-old Gonzalo is more known for grabbing the spotlight due to his nose for goal, but it was Federico who stole this show with a performance that seemed to come from that of a protective older brother. The playmaker came off the bench in the 62nd minute to replace attacking midfielder Rodolfo Pizarro and helped change the match for Inter Miami.

Not only did the substitute Higuain begin to open the game up by finding different pockets of space that Pizarro did not, Federico also gave Inter Miami the type of dangerous play in the final third that it had largely been missing before his entrance.

“He gives the team confidence and composure.”

The provider becomes executioner, and Federico Higuain has pulled #InterMiamiCF ahead in Philadelphia! pic.twitter.com/VwfrnNUxhE

On this night, Federico Higuain also gave his team a game-winner in the 83rd minute by heading a ball as clinically as his prolific goal-scoring brother. The older sibling, who pushed home a Nicolas Figal cross on the decisive play, also gave his parents another sorely-needed moment of joy.

“From a personal standpoint, we were going through some very difficult days as a family so the first thing that came to my head when I had the chance to score was my mother,” said Federico in Spanish. “My mother and father had not been having a good few days, so this is for them and especially for my mother.”

It was also for Inter Miami, which was on its way to a second straight defeat before the Higuains came to the rescue with a memorable joint effort that will not soon be forgotten.

“It is not an insignificant thing to win on this field against this team,” said Federico Higuain. “We are leaving with a wonderful feeling.”