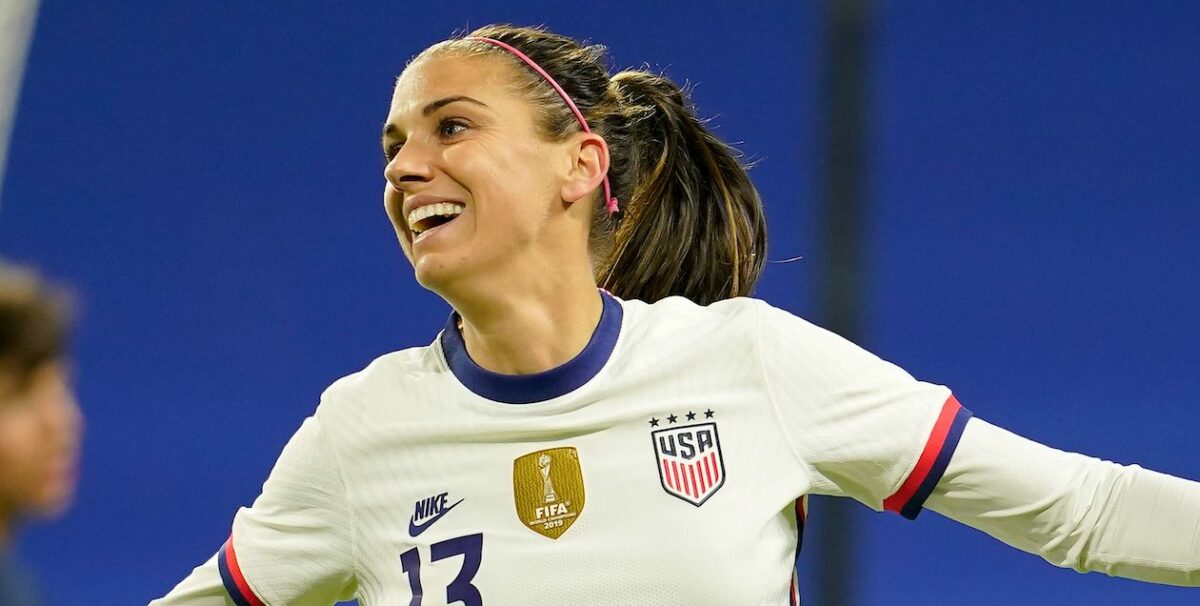 Alex Morgan missed ample time with the U.S. Women’s National Team in 2020 after her pregnancy, but since has returned and is finding her way to being at her best ahead of a busy year for the Americans.

Morgan scored her second goal this calendar year in Tuesday’s 2-0 friendly win over France in Le Havre, putting in a strong shift overall for Vlatko Andonovski’s side. The veteran forward not only scored the second goal from a clinical finish in a busy first-half, but she also drew a penalty kick in the opening five minutes, one that saw Megan Rapinoe break the deadlock.

Overall, it was a glimpse of what’s to come for Morgan when back at 100% on the international level.

“Today as a starter, I think that she executed her role very well,” Andonovski said about Morgan. “Besides the direct impact with the [penalty] and a goal, she was also very involved in our build-up. She was able to hold the ball, bring the midfielders into the game, and release pressure for us.”

“Obviously we don’t just analyze every game but every practice, and in the last couple of practices, it’s almost like she bumped it [up] a notch, was just a little more focused, a little more concentrated. And we, as a staff, we were talking about how she got the killer instinct back. With just a little space and time she was scoring goals which was very encouraging for us, and she showed it in the game tonight.”

After missing most of the international and club schedule, Morgan was sent to WSL side Tottenham last Fall in hopes of getting back to full fitness and earn minutes under her belt ahead of the 2021 NWSL season with the Orlando Pride.

Morgan did just that, featuring in five games for Tottenham, scoring twice and helping Spurs to some positive form before returning to the United States in December. She arrived back on the international level at the SheBelieves Cup in February, scoring once as the Americans lifted the tournament title.

Now after her best overall performance in some time, Morgan admits she is happy to be nearing her full potential again.

“I was really looking forward to this camp in general because preseason with Orlando went really well,” Morgan said post match. “I felt like I was able to gain that couple percentage [points] that I was just lacking as I was coming back from pregnancy, so I felt like really good going into this camp.”

“I was really happy to get minutes and both games, and I felt like, tonight we had a good showing. And it’s always nice to get on the scoresheet against France, it makes it that much more special.”

Up next for Morgan will be returning to club action with the Orlando Pride, who opens their schedule on Wednesday against Gotham FC. The USWNT, like the USMNT, will have a busy schedule coming up as Andonovski’s side prepares for involvement in the rescheduled Tokyo Summer Olympics before opening 2023 FIFA Women’s World Cup Qualifying in November.

After a lackluster draw with Sweden over the weekend, the USWNT rebounded nicely against one of the world’s best, another challenge to hopefully improve them for more title runs in the near future.

“This team is the best when they’re getting tested, and I thought that this is a great test for us to see how quick we can adapt from the game against Sweden to this game,” Andonovski said.

“One of those things was I said that we were not patient enough and we were not clean enough in the last game, which in this game, we did a pretty good job.”