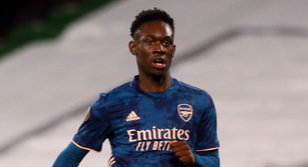 Folarin Balogun looked set to walk away from Arsenal this summer, but will now reportedly commit his future to the English Premier League side in the coming days.

Balogun is close to signing a new four-year deal with the Gunners, The Athletic reported Friday. The dual-national was linked with a move out of London at the end of his contract this summer, but now is ready to stay in England long-term.

Arsenal tried to sign Balogun to a new deal earlier this season, but was unable to agree to terms with the 19-year-old. Brentford and Sheffield United were among the teams trying to acquire Balogun back in January, according to the report.

Now it looks likely that Balogun will remain a part of Mikel Arteta’s plans heading into the 2021-22 season.

Balogun has mainly played for Arsenal’s Under-23 team this season in the Premier League 2 Division, scoring nine goals and adding two assists in 19 combined appearances. A former U.S. Under-18 Men’s National Team player, Balogun has also appeared in five matches with the senior team, scoring in his first team debut in the Europa League group stage against Molde.

Balogun will likely remain with Arsenal’s U-23 team for the rest of the league season before fighting for a first team role with the Gunners over the summer.