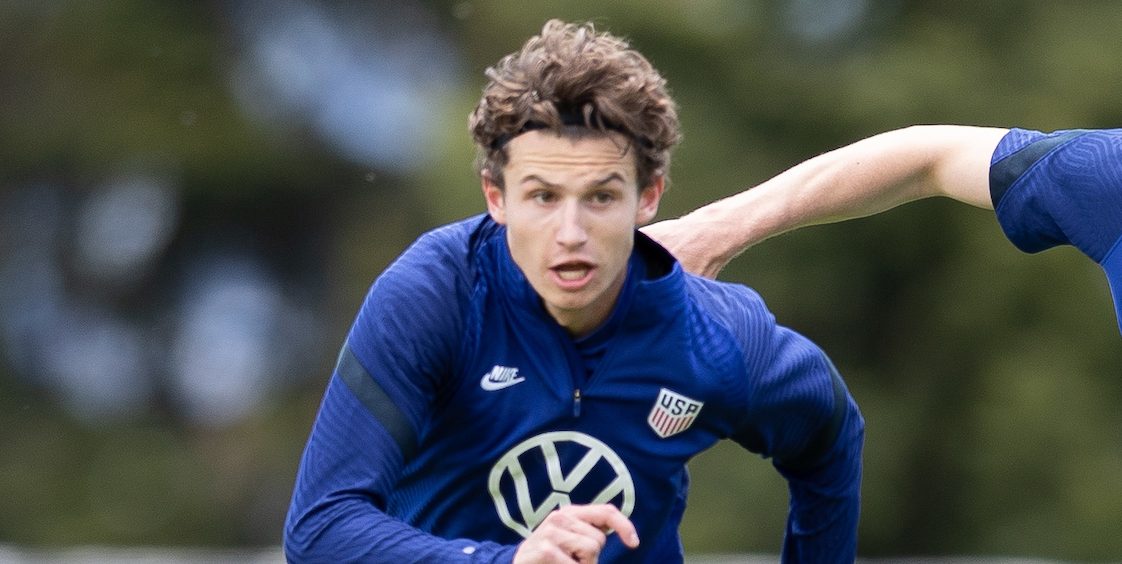 Five months into his European career, Brenden Aaronson is already looking like a seasoned veteran and now the American playmaker is hoping to carry his impressive start at Red Bull Salzburg over to international duty with the U.S. Men’s National Team.

Aaronson has been called in for upcoming matches against Switzerland in a May 30th friendly and Honduras in the rescheduled Concacaf Nations League semifinals on June 3rd. The former Philadelphia Union homegrown player is coming off an impressive start to life in Europe, teaming up with now-former manager Jesse Marsch to win a domestic double in Austria.

With three domestic trophies under his belt in the past year between the Union and Red Bull Salzburg, Aaronson has arrived at his latest USMNT camp with momentum and sky-high confidence.

“It’s been a whirlwind of six months for me, and it’s been a crazy time,” Aaronson said. “It’s not always easy to come over and get acclimated right away and get into the group – you’re meeting new friends and coming into a new system and all these kinds of things, and it was tough at first. I think it was having the confidence of my teammates and my coaches, and that’s what kind of helped me push on.

“In MLS, a lot of teams will sit back a little bit, but in the Austrian league you have teams that even though you’re the top team in the league, you have guys that are flying at you [in] no time,” Aaronson said. “I think the time that I’ve been here, my decision-making in the final third has just gotten quicker and faster and I think it’s coming off really well, too.”

Aaronson needed little time to make an impact in Austria, scoring seven goals and registering five assists in 25 combined appearances with Red Bull Salzburg. He made his debut in the UEFA Europa League and also got the chance to work with a rising talented manager in Marsch for five months.

On the international level, the 20-year-old Aaronson has scored two goals and registered one assist in four appearances for the USMNT. The New Jersey native has continued to push for a consistent role in Gregg Berhalter’s squad, though he has been used predominantly on the wing in his recent appearances.

Aaronson is one of several blossoming prospects within the USMNT and his early time with Red Bull Salzburg was something Berhalter noticed earlier this year as beneficial.

“Being with Jesse Marsch and Red Bull Salzburg has had a positive effect on him,” Berhalter said about Aaronson back in March after a goalscoring performance vs. Jamaica. “He’s battling with everyone, no matter if he is twice their size. He doesn’t hesitate and that also benefitted to his strong performance.”

Aaronson may get the opportunity to continue developing as a USMNT  Player as early as Sunday against 13th-ranked Switzerland before taking part in the Concacaf Nations League finals in Denver. His growing versatility as an offensive player has not only helped his stock at the club level with Red Bull Salzburg, but has given Berhalter more looks on how to use him with the USMNT going into several different competitions.

With big performances already under his belt in both MLS and Austria, Aaronson is ready to continue gelling with this current group of USMNT players and is hoping to deliver a few victories along the way.

“You’re seeing where they’re playing at, and they’re winning big trophies and it’s huge – it’s a really big step in U.S. football,” Aaronson said. “I’m really excited for the group of guys, and now it’s just pushing onto the Nations League and winning a trophy with this group of guys.”