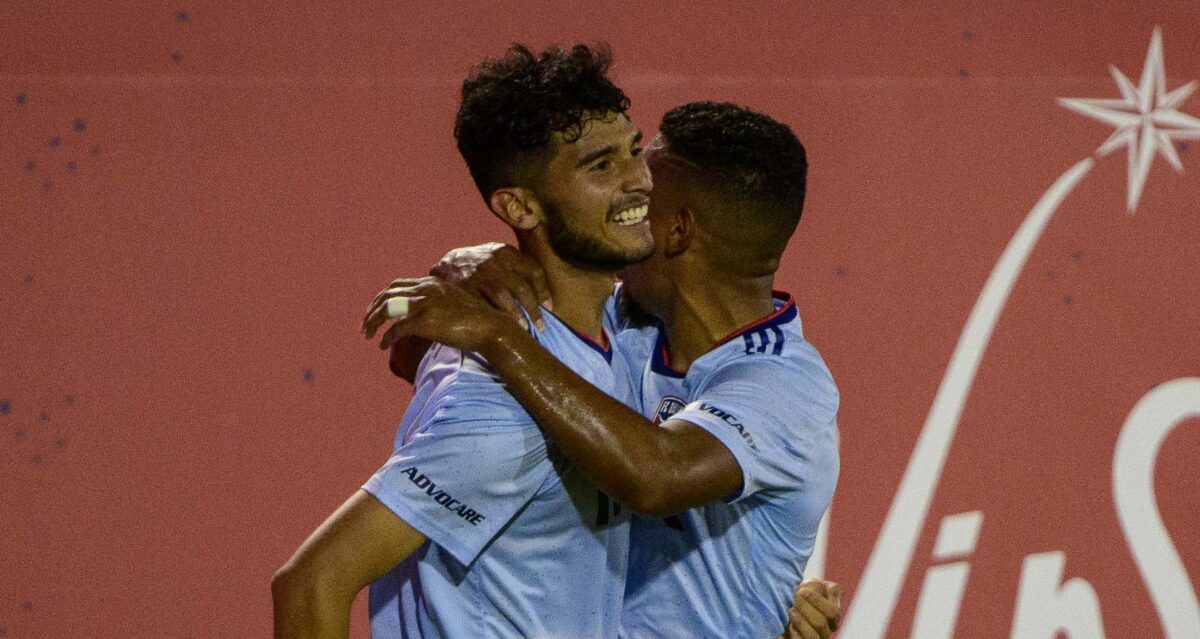 Ricardo Pepi is in a good state of mind for the FC Dallas attack, and the young forward delivered his best performance of the 2021 season on Sunday in a shocking home win over the in-form New England Revolution.

Pepi registered his first multi-goal performance as an MLS player, scoring twice in a 2-1 win over the Eastern Conference-leading Revolution. The young forward terrorized the Revolution backline in his 61-minute outing, getting the better of goalkeeper Matt Turner in both halves of a second victory this season for FC Dallas.

“It’s a great feeling,” Pepi said about his two-goal performance. “I feel like this was needed for the team. First I want to thank Jesús [Ferreira] and Ryan [Hollingshead], they did most of the job [for his goals] and the team did too, I just had to put it away. But it’s a great feeling, the team needed it and we’ll keep going forward.

Pepi raced off in the 11th minute following a Revolution giveaway, and slid a right-footed shot into the bottom-left corner. The 17-year-old showed off his pace by edging Andrew Farrell to the Jesus Ferreira pass upfield, before putting his shot in a spot where even Turner couldn’t reach.

After the Revs hit back before halftime through a Gustavo Bou equalizer, FC Dallas needed another glimpse of Pepi’s ability in the final third. Ryan Hollingshead’s pass upfield down the left flank was gathered by Pepi before the forward dangled his way around Jon Bell and Farrell to roof a shot into the top of the Revs goal.

THE RICARDO PEPI HYPE TRAIN HAS LEFT THE STATION!

“Pepi, a young player, but he showed he can play big when he needs to,” FC Dallas head coach Luchi Gonzalez said. “I’m really proud of him and I think it’s his first two-goal game at this level and it’s another start for him. That’s credit honestly to all of our nines competing with each other.

“I’m going to say that yesterday Franco (Jara), in training, was very competitive and supportive,” Gonzalez said. “That’s what it’s going to take, that collective support. The chip on your shoulder and competitiveness that you are not getting the start, but also being ready. Jara came in and helped us win the game. Maybe not in his traditional role because he had to help us defend, and his experience, helps us win games.”

Pepi has shown great skill and determination to rise up the ranks within the FC Dallas Academy and has not let off after making it into the first team squad. The young forward has now scored three goals in his last two appearances for the club and also hit the crossbar in Sunday’s match, ending his chance for a first-career MLS hat-trick.

His cleverness and one-on-one ability left the Revolution defenders exposed on both of his goalscoring occasions and should help take pressure off other attacking players like Ferreira, Franco Jara, and Paxton Pomykal.

Pepi’s recent run of form has also served to boost his chances of being considered for the U.S. Men’s National Team’s Gold Cup team. Pepi was one of 59 players on the preliminary roster, and while competition at striker is fierce, Pepi has done enough in recent weeks to at least merit stronger consideration from USMNT head coach Gregg Berhalter.

Though Pepi is still probably a long shot for the Gold Cup, his current run of form should help him continue to earn a more consistent starting role with FC Dallas as he helps the team rebound from a slow start to the 2021 season.

“With him, he’s a young guy and we have a partnership in the locker room and outside the locker room, outside soccer in general,” FC Dallas forward Jesus Ferreira said of Pepi. “I think that it’s a special bond because both of us are young and we’re looking at the same objectives: to score goals, assists. I think showing what we can do together is something special and when we work together and the team works together we can do great things.”