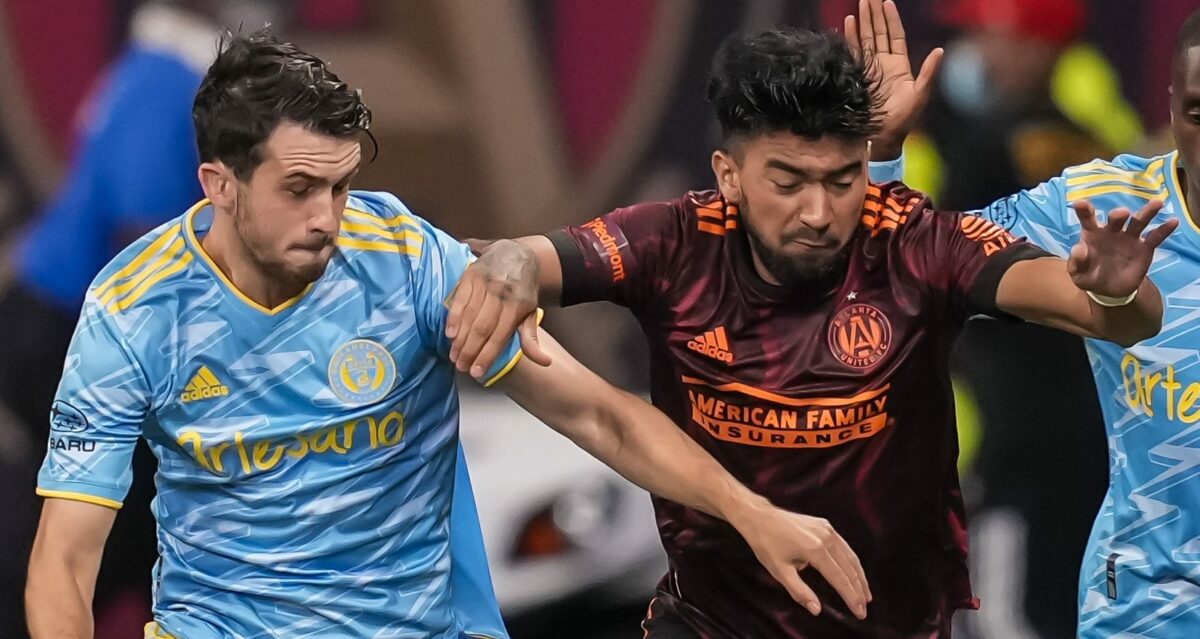 Major League Soccer’s return from the international break kicked into full swing on Saturday, and the action didn’t stop on Sunday with a four-goal thriller from Atlanta.

The Philadelphia Union fought back from a two-goal deficit to pick up one point in a 2-2 draw with Atlanta United. Cory Burke and Jakob Glesnes each scored goals to hand Jim Curtin’s side an important road draw ahead of this week’s showdown with Columbus.

In Saturday’s busy day of MLS action, the Seattle Sounders rallied from an early 1-0 deficit to top the LA Galaxy, 2-1, with Raul Ruidiaz scoring the winner early in the second half at Dignity Health Sports Park.

The Sounders stand as the lone remaining unbeaten team in MLS after Nashville SC’s loss to the New York Red Bulls on Friday, and Saturday’s big road win against the Galaxy cemented their status as a powerhouse.

In the Eastern Conference, New England maintained its five-point lead atop the conference table after a dramatic 3-2 road win against New York City FC in a match played at Red Bull Arena. Matt Turner delivered the heroics in goal, while Revs midfielder Tommy McNamara scored the game-winning goal against his former team.

It was a special Saturday for stadiums, as the Columbus Crew bid farewell to the old Crew Stadium, playing the final match at its long-time home before moving into its brand-new downtown stadium.

Austin FC opened its new home, Q2 Stadium, though the venue’s inaugural MLS match failed to deliver any goals in a 0-0 draw with the San Jose Earthquakes.

Here is a full rundown of this weekend’s action:

Man of the Match: Brooks Lennon. Lennon was a true live wire for the Five Stripes, completing 85% of his passes and creating nine chances in the draw. The veteran also won six of his seven individual battles, holding in check the likes of Kacper Przyblko and Sergio Santos.

Moment of the Match: Glesnes saved the best effort for last, scoring the equalizing goal off a terrifically hit attempt from long-range. The Norwegian centerback’s shot rattled in off the crossbar, giving the Union one point in a hostile atmosphere.

Match to Forget: Przybylko suffered an own goal earlier in the match and overall was quiet offensively in his 90-minute outing. The striker flicked a header into his own goal for the opening goal of the match, and finished with one attempt towards Brad Guzan.

Man of the Match: William Yarborough and his seven saves protected the Rapids’ lead. The 32-year-old goalkeeper had a stellar day stopping a garden variety of FC Cincinnati chances.

Moment of the Match: Jonathan Lewis’ goal in the 72nd minute killed the game.

Match to Forget: It was a long night for FC Cincinnati goalkeeper Kenneth Vermeer. The first concession was a chaotic play, and he rendered himself defenseless by charging off his line. The second, he left the door wide open and was frozen by a simple and slow shot.

Man of the Match: Gyasi Zardes’ first-half brace was the main event in Saturday’s contest. Notching goal numbers 2 and 3 on the 2021 campaign, Zardes led Columbus to its last-ever victory at Historic Crew Stadium.

Moment of the Match: Zardes’ 18th-minute opener. The manner in which he cleaned up a failed clearance and found a goal out of then air made it clear that the Crew were going to be bulletproof on their marquee day.

Match to Forget: The Fire can look all across the field and and document forgettable performances in their seventh-straight loss, but centerback Carlos Terán never appeared up to his task in a rare starting opportunity.

Man of the Match: Matt Turner made seven saves, including a stunning penalty kick stop early, and a win-saving denial of a Maxi Moralez shot in the 92nd minute.

Moment of the Match: Turner’s save on Moralez in the second minute of stoppage time was both outstanding and vital to preserving the three points for New England.

Match to Forget: Valentin Castellanos is going to see Matt Turner in his sleep after Turner stopped his penalty kick, and made another point-blank save on a clear scoring chance.

Man of the Match: Tesho Akindele led the way for the Lions, scoring the opening goal and assisting on the club’s second. The veteran forward was the standout star between both clubs.

Moment of the Match: Junior Urso’s 83rd-minute winning goal proved to be the difference between the sides. Urso finished off a good set up from substitute forward Chris Mueller and handed the Lions a second win over TFC in 2021.

Match to Forget: Brazilian defender Auro not only made an error on one of the goals scored by Orlando City, but was pushed around for a lot of the match. Auro lost a game-high 11 individual duels and failed to win any of his five aerial battles.

Man of the Match: Kevin Paredes. The teenage D.C. United attacker had a strong and complete showing, making a string of good plays on both sides of the ball.

Moment of the Match: Gregore’s ejection. The Inter Miami midfielder was enjoying a solid performance, but his controversial 56th-minute ejection due to a second yellow card left his side down a man and tilted the game in D.C. United’s favor.

Match to Forget: Ryan Shawcross. The veteran centerback had a nightmare showing, and that was even before he was given a straight red card in the 84th minute for violent conduct. He struggled to keep track of Ola Kamara, who wasted chance after chance until he scored a penalty, and then got sent off unnecessarily.

Man of the Match: Dallas goalkeeper Jimmy Maurer came up big in the second half and racked up four saves, which made the difference in a wide-open game.

Moment of the Match: Ricardo Pepi’s second-half equalizer secured a point for Dallas and made things interesting in the remaining minutes.

Match to Forget: Minnesota newcomer and striker Adrien Hunou is still looking for his MLS account opener and was snake bitten to not have earned it in two solid chances in the first half.

Man of the Match: No goals were scored, and both goalkeepers deserve plenty of credit. Brad Stuver collected nine saves and came up the biggest in the end for Austin.

Moment of the Match: The Quakes closed the game with a series of dangerous threats, and it looked like they were finally cashing in on it in the 82nd minute with a Cade Cowell setup to Carlos Fierro. Fierro had time and went far-post, but an outstretched Stuver took care of it and affirmed that he was not going to get beaten in his teams home opener.

Match to Forget: San Jose has enough talent to punish Austin, and it showed. Oswaldo Alanís managed three shots on target but could not find a way to beat Stuver.

Man of the Match: Yeimar Gomez Andrade was a force defensively, but then he also delivered the equalizer, and helped set up Raul Ruidiaz’s winner to help the Sounders earn a win in LA.

Moment of the Match: The Gomez Andrade equalizer was an example of sheer will winning out as he powered home a header in a sea of Galaxy defenders.

Match to Forget: Sebastian Lletget had a quiet night, and while his passing was tidy, he failed to register a single shot or key pass, offering little to a Galaxy attack that managed just one penalty kick goal.

Man of the Match: Timbers midfielder Marvin Loria found the back of the net thanks to a fortunate bounce and a poor attempted clearance by Jaylin Lindsey. However, Loria kept the pressure on Sporting KC’s back line all night and earned the Timbers several scoring chances.

Moment of the Match: Dairon Asprilla shifted the momentum of the game in the 36th minute, scoring off the rebound of his own blocked shot. The Timbers leveled things against the run of play and took the advantage in the first half.

Man of the Match: Maxi Urruti delivered the vital equalizer for the Dynamo, helping them earn a precious road point.

Moment of the Match: Urruti’s deft touch and excellent finish made his equalizer the best moment of the night.

Match to Forget: Corey Baird has been a stellar addition to the LAFC attack, but he was largely invisible on Saturday, failing to register a single shot.