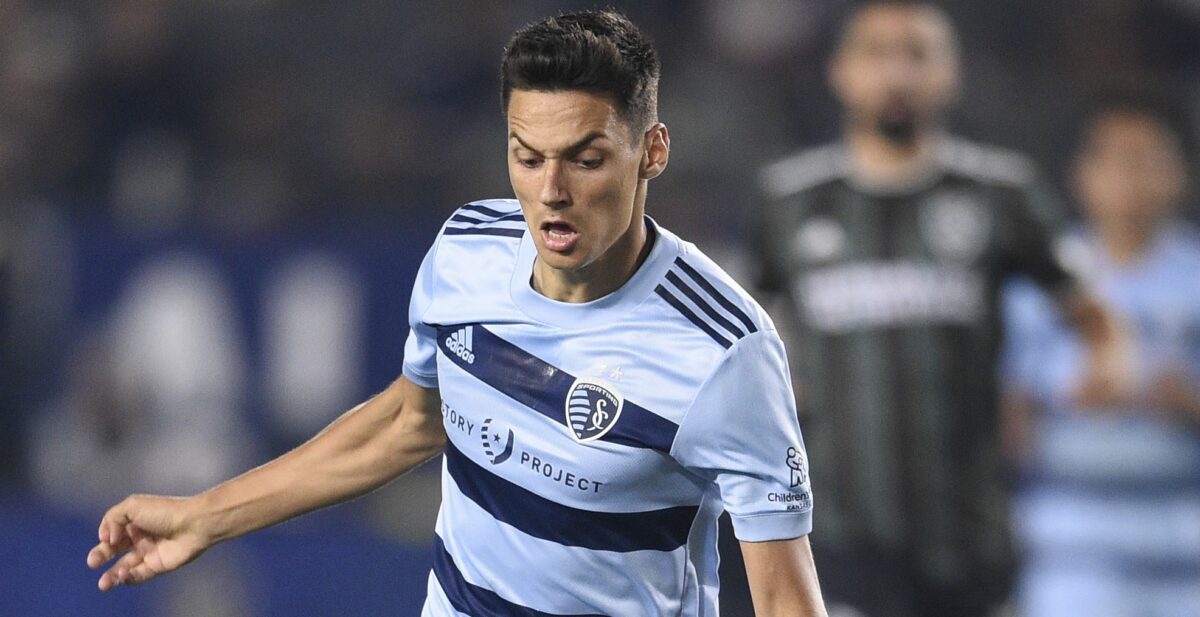 Week 10 of the MLS schedule came to a close on Sunday with several teams picking up important results during the busy summer stretch.

Sporting KC was the lone team to win on Sunday, downing the LA Galaxy 2-0 at Dignity Health Sports Park. Johnny Russell and Khiry Shelton each scored in the final 15 minutes of the match, giving Peter Vermes’ side a first road win over the Galaxy since April 2018.

The Seattle Sounders grabbed a first-half lead on the road in Colorado, but only finished with one point in a 1-1 draw with the Rapids. Michael Barrios and Cristian Roldan cancelled out each other’s goals, as the Sounders remained unbeaten in league play.

On Saturday, the Columbus Crew fought back in its first match at Lower.com Field, earning a 2-2 draw with the New England Revolution. An Andrew Farrell own goal helped Caleb Porter’s side avoid a second-straight defeat to the Eastern Conference leaders.

D.C. United made club history on Saturday, scoring seven goals in a 7-1 beatdown of Toronto FC. Paul Arriola, Kevin Paredes, and Ola Kamara were among the goalscorers as Hernan Losada’s men rolled to a home victory.

Elsewhere, C.J. Sapong scored the winner for Nashville SC in a first-ever meeting with the Philadelphia Union while LAFC defeated Real Salt Lake 1-0 on the road. Minnesota United shared the points with the San Jose Earthquakes in a 2-2 draw at Allianz Field.

Here is a closer look at Saturday’s MLS results:

Man of the Match: Ricardo Pepi not only continued his strong run in front of goal, but he was the most liveliest player for either team. Pepi created a game-high four chances and helped FC Dallas earn one point at the death.

Moment of the Match: Just when it looked like FC Dallas would suffer a home defeat, an own goal from Ranko Veselinovic helped Luchi Gonzalez’s side draw level.

Match to Forget: Matheus Bressan’s error led to one of the Whitecaps goals in the match and overall the Brazilian defender cost his side a chance at a full three points.

Man of the Match: Yeimar Gomez Andrade. The Sounders left the Colombian center back on an island all night, and time and again he snuffed out the danger against smaller, more agile attackers.

Moment of the Match: Andre Shinyashinki found himself one-on-one against Sounders goalkeeper Stefan Cleveland in just the 13th minute, but blew a chance to stake the hosts to an early 1-0 lead.

Match to Forget: Brad Smith. While Rapids goalkeeper William Yarbrough certainly could have done better on Alex Roldan’s goal, the nod here goes to Smith, who failed to connect crosses in attack and struggled in defense as well.

Man of the Match: Andreu Fontas. Fontas was a rock for Sporting KC’s backline on Sunday night, winning a game-high three tackles and helping keep the depleted Galaxy frontline in check. He also hit the crossbar once, and won six of seven tackles as Sporting KC kept a clean sheet.

Moment of the Match: The LA Galaxy looked set to earn a clean sheet draw, but Johnny Russell had other ideas. Russell’s finish broke the deadlock and opened the doors for an insurance goal in stoppage time from Khiry Shelton.

Match to Forget: Out of anyone in the Galaxy attack, Kevin Cabral went missing for 90 minutes. Cabral only had 36 touches, the lowest by any player, and failed to make a major impact in his outings.

Man of the Match: Tajon Buchanan delivered a goal and an assist as the Revolution walked out of Columbus with one point. The Canadian wingback completed 89% of his passes and overall was New England’s best overall player before being subbed off.

Moment of the Match: The Crew almost stole all three points in stoppage time, but Andrew Farrell made a desperate kick save to deny Alex Matan.

Match to Forget: Although Farrell redeemed his earlier error, the veteran defender’s own goal off an errant back-pass proved costly for the Revolution.

Man of the Match: Kevin Paredes scored his first career MLS goal and played what was arguably his best game as a young professional. The 18-year-old wingback won 13 of 15 duels, 9 of 12 tackles and  completed 91 percent of his passes.

Moment of the Match: Paul Arriola officially put the game out of reach in the 71st minute with a clever touch and finish past Alex Bono that gave DC a 4-1 lead.

Match to Forget: Ralph Priso-Mbongue. Giving up seven goals is an indictment on the entire Toronto midfield and defense, but Priso-Mbongue earned the match to forget honors with an own goal in the 21st minute.

Man of the Match: Victor Wanyama. The CF Montreal midfielder helped his side boss the game in the first half and then put in a lot of the dirty work on the defensive side in the second to see out the victory.

Moment of the Match: Angled Winner. The game’s lone goal came four minutes before halftime, with Mathieu Choiniere finishing a good sequence with a tight shot from the right to give CF Montreal a deserved lead.

Match to Forget: Lewis Morgan. A far cry from his usual level, the Inter Miami winger struggled to make an impact both from the run of play and with his set-piece delivery.

Man of the Match: Patryk Klimala. Klimala was not on the scoresheet for the Red Bulls, but he played in an integral part in the victory, assisting both Red Bull goals.

Moment of the Match: In the 79th minute, Fabio scored his second goal of the season and the eventual game winner from inside the 18 via an assist from Patryk Klimala.

Match to Forget: Antonio Carlos. The Brazilian defender was given the start for Orlando City, but his day ended prematurely with a leg injury in the 14th minute.

Man of the Match: Ignacio Aliseda. Aliseda sparked the Fire to a much-needed win on Saturday, scoring a brace in a comfortable 3-0 victory. He also assisted on Chicago’s third goal of the night, putting together his best shift in a Fire kit.

Moment of the Match: Atlanta United had a slim chance to get back into the match after halftime, but Przemyslaw Frankowski’s goal truly iced the win for Chicago.

Match to Forget: Atlanta United’s offense failed to do much in the defeat, but Ezequiel Barco’s performance was shocking. Barco failed to register a shot on goal, in a night where he was needed to produce.

Man of the Match: Nathan. The Brazilian defender was the best defensive player on the field, winning a game-high six tackles and keeping Emanuel Reynoso and Adrien Hunou in check.

Moment of the Match: Oswaldo Alanis came close to stealing all three points for San Jose, but saw his stoppage time strike rattle the crossbar.

Match to Forget: Bakaye Dibassy’s error allowed San Jose to score one goal in the 2-2 draw and cost his team three points at home.

Man of the Match: Randall Leal did well to create the only main chance of the match, assisting on CJ Sapong’s winner. He also won two tackles and completed two dribbles in the victory.

Moment of the Match: Jamiro Monteiro had one final crack at tying things up for the Union, but saw his long-range effort saved by Joe Willis in stoppage time.

Match to Forget: Daniel Gazdag. Gazdag made his first start for the Union, but was held in check by Nashville’s midfielders and defenders. He only completed 12 passes and missed his lone shot attempt on goal.

Man of the Match: Alvaro Barreal found a fast response for Cincinnati, nearly set up a go-ahead goal, and was lively as he switched in and out of the wing and defending roles throughout the game.

Moment of the Match: Barreal’s fifth-minute equalizer looked to set the stage for a slugfest, but in the end, it set things up to be an even and nervy contest.

Match to Forget: It was another goalless performance from Cincinnati’s $13 million newcomer Brenner. The striker only had one opportunity and was invisible apart from it.

Man of the Match: Eddie Segura made a goal saving clearance in the second half to keep the 1-0 led for LAFC and nullified the red-hot Rubio Rubin for the entirety of the match.

Moment of the Match: In the 71st minute, Rubio Rubin was in on goal for RSL, but Eddie Segura raced to the endline and cleared the ball before it reached the back of the net, maintaining the 1-0 lead for LAFC.

Match to Forget: Rubio Rubin. Real Salt Lake outshot LAFC 14 to 4, but Rubin was largely quiet and failed to convert a clear goal scoring chance in the 71st minute.

(Jon Gallagher 28′, Diego Fagundez 33′, Alex Ring 77′, Hector Jimenez 81′) – (Jeremy Ebobisse 45 +7′)
Man of the Match: Alex Ring not only scored a great goal for Austin FC, but the Finnish international was all over the field in a lopsided win. Ring completed the most passes in the match (103) and finished with a 94% passing completion rate. His quality was on display once again.
Moment of the Match: Ring’s goal truly padded Austin FC’s lead at 3-1 before Hector Jimenez got in on the fun later in the second-half.
Match to Forget: Take your pick, the entire Portland Timbers backline was atrocious in the defeat, failing to deal with the skillfulness of Austin FC’s playmakers and not limiting the attacking options of Jon Gallagher and Diego Fagundez.