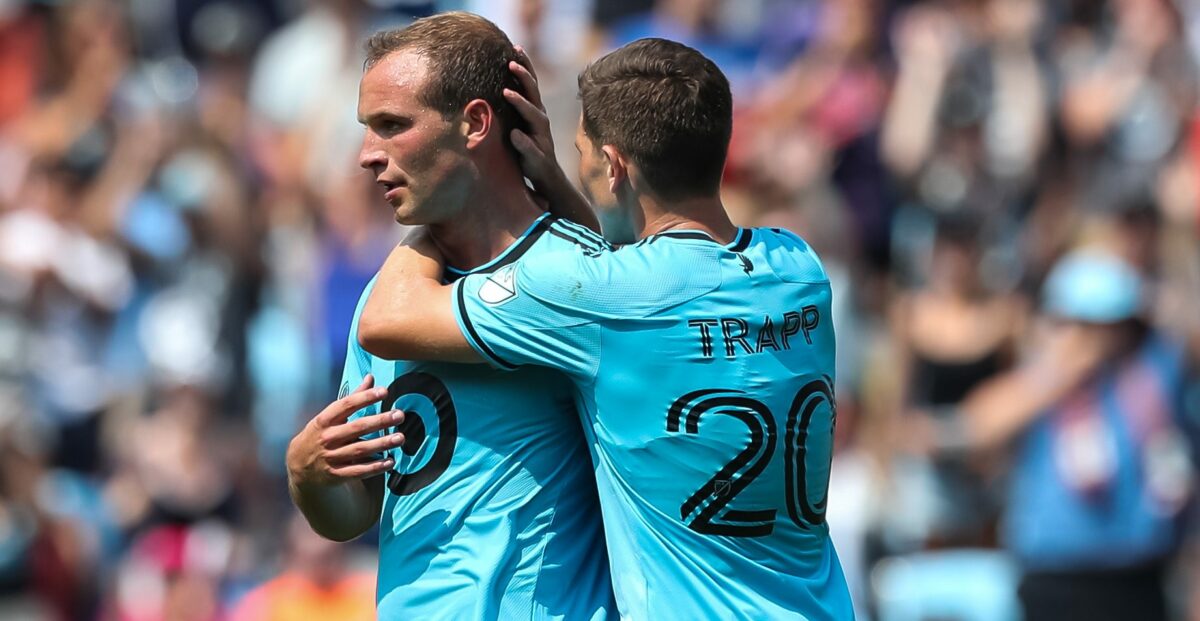 Minnesota United picked up the result of its season, handing the Seattle Sounders their first league loss of 2021.

Robin Lod’s winning goal in the 81st minute propelled Adrian Heath’s side to a 1-0 victory at Allianz Field. The Loons have now won three of their last five matches, moving up to sixth place in the Western Conference standings.

The Philadelphia Union and New England Revolution went into this weekend’s action needing to win without two of the league’s best goalkeepers in the lineup due to Gold Cup duty, and both teams saw other players step up to help deliver victory.

The Union rode goals from Sergio Santos and Kasper Przybylko, and overcame a weather delay, to post a 2-1 victory over D.C. United at Subaru Park. With star goalkeeper Andre Blake away on Gold Cup duty with Jamaica, the Union were still able to earn an important road win.

The Revs needed a Gustavo Bou goal, and strong outing from backup goalkeeper Brad Knighton, who started in place of Matt Turner, to earn a 1-0 victory over Atlanta United at Mercedes-Benz Stadium. The Five Stripes saw their winless streak extended to eight matches as their Josef Martinez-less attack finished without a goal for the fourth time in five matches.

Weather wreaked havoc on MLS proceedings, with Inter Miami’s visit to Red Bull Arena to face the New York Red Bulls postponed due to thunderstorms in the area.

While it rained in certain markets, it rained goals in some others, including Montreal and Nashville, where the home teams both delivered five-goal nights. CF Montreal rallied from a 4-2 deficit to beat FC Cincinnati in the team’s first match in Montreal this season.

Here is a closer look at this weekend’s action in MLS:

Man of the Match: Robin Lod delivered the winning goal for Minnesota United and overall was lively in the final third for the Loons for his entire 90 minute performance.

Moment of the Match: Lod’s goal was the main highlight of the match, giving the Sounders their first defeat of the 2021 season.

Match to Forget: Raul Ruidiaz was Seattle’s top attacker coming into the match, but failed to deliver much in his performance. He had the fewest touches in the match (32) and could not help the Sounders avoid a first loss of the season.

Man of the Match: Bruce Arena called Brad Knighton’s last performance in the 3-2 loss to Toronto FC “mediocre.” Knighton responded this time, making five saves and preserving the lead away from home.

Moment of the Match: Gustavo Bou scored off a smooth assist by Adam Buksa, who had fallen down as he tried to collect a cross. Bou stayed hot, scoring his sixth goal in the last seven games.

Match to Forget: Atlanta held 64 percent of possession and outshot the Revs. But Atlanta United created few clear-cut chances with their young lineup, and lone striker Erik Torres had a difficult match.

(Postponed due to inclement weather)

Man of the Match: Mason Toye and Ahmed Hamdi registered braces, but Toye gets the MOTM nod. In addition to keeping the comeback alive, he converted on a high-stakes penalty kick in the 72nd minute.

Moment of the Match: Montréal came back from a pair of 2-0 deficits and there were plenty of exciting moments to choose from. Ultimately, Ahmed Hamdi’s game-winner put the stamp on the nine-goal evening in front of the hometown fans for the first time this season.

Match to Forget: It was a long night for Cincinnati goalkeeper Kenneth Vermeer, who most notably opened the door for the comeback when he prompted Toye’s 72nd-minute penalty.

Man of the Match: Darlington Nagbe’s followed his well finished first half goal  with a midfield performance that frustrated NYCFC’s attempts to find an equalizer.

Moment of the Match: Lucas Zelarayán proved again why it is dangerous to give up set pieces to the Columbus Crew. His free kick in the 62nd minute beat both NYCFC’s wall and goalkeeper, securing the hosts three points.

Match to Forget: Luis Barraza will feel he could’ve done better on each of the Crews’ goals. The 24 year-old was late to come off his line to close down Nagbe for the hosts’ opener before getting beaten by Zelarayán’s free kick.

Man of the Match: Sergio Santos delivered the opening goal for the Union and assisted on the winning goal by Kacper Przybylko, earning Man of the Match honors for his abilities in the final third.

Moment of the Match: After seeing both a penalty claim and a goal waived off by VAR, the Union got their winner after hard work from both Santos and Przybylko in the 83rd minute. Santos raced away on a counter attack before feeding Przybylko for the winning goal.

Match to Forget: Nigel Robertha was out of sync for DC United on Saturday, being held in check by the Union backline and failing to deliver a shot on goal. Robertha also lost possession a game-high four times and did little to boost his stock as the lead striker.

Man of the Match: Yeferson Soteldo was a handful for Orlando City’s defense to deal with all night, and he helped start the sequence leading to TFC’s lone goal.

Moment of the Match: Jozy Altidore’s 72nd-minute finish gave the home fans at BMO Field something to celebrate for the first time in more than a year.

Match to Forget: Alex Bono committed the foul leading to the equalizing penalty kick for Orlando City, and saw a good chance to save the penalty come up just short as he managed to get a hand on Nani’s attempt.

Man of the Match: A hat-trick scored in a six-minute span made Hany Mukhtar the easy choice for top honors in Nashville SC’s romp.

Moment of the Match: Mukhtar’s free kick goal made it 3-0 and completed his hat-trick in just six minutes.

Man of the Match: Cole Bassett’s 53rd minute strike rescued a point for the Rapids after Robin Fraser’s side went down early on.

Moment of the Match: Bassett made the most of the space San Jose’s backline allowed him, firing a loosely contested shot past James Marcinkowski.

Match to Forget: Benjamin Kikanovic lackluster first half saw his day cut short at the break after being replaced by Chris Wondolowski.

Man of the Match: Cristian Dajome was active all match long, and his effort was finally rewarded with the 77th-minute winner.

Moment of the Match: Ethan Zubak’s 26th-minute goal would have made the score 2-0 Galaxy, but VAR showed Zubak to be clearly offside, and the correct decision was made to erase the goal.

Match to Forget: Derrick Williams looked lost on both Whitecaps goals, and while he made plenty of positive defensive contributions, his effort on the two Vancouver finishes had to sour the night for him.

Man of the Match: David Ochoa was on his way to securing this honor after a plethora of top-notch saves, but Carlos Vela gets the nod for his beautiful winner.

Moment of the Match: In the 78th minute LAFC found the winning goal when Moon Hwan-Kim crossed it to Carlos Vela, who took the ball down off his chest and volleyed it home for the winner.

Match to Forget: Making sure Carlos Vela doesn’t get a clear look at goal is a big defensive responsibility and Donny Toia failed at that task in the match’s most decisive moment, misplaying a cross from Moon Hwan-Kim, which left Vela wide open for a close-range blast with his deadly left foo.

Man of the Match: Jeremy Ebobisse scored the lone goal of the match at Providence Park, playing the hero for the Timbers in a 1-0 win over FC Dallas. After countless pressure from the Timbers offense, Ebobisse connected with Yimmi Chara before unleashing a wicked shot into the top corner.

Moment of the Match: Ebobisse’s goal sent Providence Park into pandemonium, giving Portland a deserved victory and sucking the air out of the FC Dallas players following lengthy defensive work.
Match to Forget: Ricardo Pepi had some good looks early in the match that he wasn’t able to put home, and those misses came back to haunt FC Dallas.