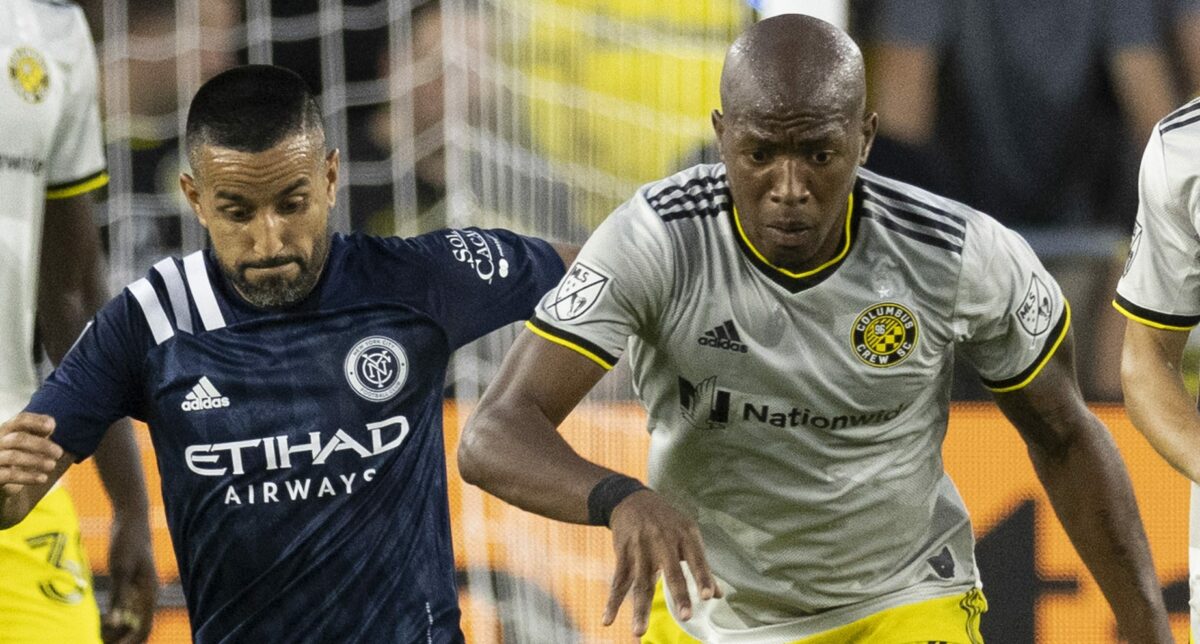 Two of the Eastern Conference’s in-form sides will kick off this weekend’s slate looking to inch higher up the table and separate themselves from one another.

The Columbus Crew visits Yankee Stadium on Friday night to take on NYCFC with only one point separating the two teams. Both teams remain without key starters due to the Concacaf Gold Cup, but will fancy their chances to win in the Bronx.

MLS-leading New England Revolution pay rivals New York Red Bulls a trip on Saturday looking to continue their good run of form this summer. Bruce Arena’s side has won three matches in a row while Gerhard Struber’s men have failed to win any of its last three matches.

Friday’s late night match comes from Dignity Health Sports Park as the LA Galaxy welcome the Portland Timbers to town. Greg Vanney’s side has only won one of its last five matches and will try to claim a first head-to-head win since September 2020.

Two familiar foes meet in the Bronx on Friday night to kick off a three-match slate of MLS action.

NYCFC has done well to rebound from back-to-back losses by earning consecutive clean sheet victories over the past two weeks. A 1-0 triumph over CF Montreal was followed up by a 5-0 romp past Orlando City last weekend which saw five different players find the back of the net. Luis Barraza continues to start for NYCFC in goal with Sean Johnson still on U.S. men’s national team duty. Barraza has made four saves and even registered one assist along the way.

Columbus is riding a six-match unbeaten run in league play, defeating NYCFC 2-1 back on July 17 at Lower.com Field. Gyasi Zardes’ absence continues to leave a hole at the top of Caleb Porter’s attacking front, but Lucas Zelarayan and Darlington Nagbe remain top options to lead the way from midfield. Jonathan Mensah has also helped the Crew from his center back position, helping the team to back-to-back clean sheets.

Bruce Arena’s New England Revolution come to Red Bull Arena holding a 15-point advantage over the New York Red Bulls and will be backed to extend that lead this weekend.

The Revs have won three straight matches, outscoring their opponents 8-1 over that span. Gustavo Bou has three goals in his last three appearances while Adam Buksa has chipped in two goals and one assist. Even without Matt Turner and Henry Kessler, the Revs have continued to gel together and are showing zero signs of slowing down.

New York has only won once in its past five matches, scoring only four goals in the past 450 minutes of soccer. Caden Clark’s return is a promising sign for Gerhard Struber, but overall he will need more from his attacking duo to help knock off New England. Fabio and Patryk Klimala will partner the Red Bulls attack once again, going up against the confident pairing of Andrew Farrell and Jon Bell.

The LA Galaxy remain in the top three of the Western Conference for now, but need to get a grip on their current situation to avoid a slip down the standings.

A three-match winless run for Greg Vanney’s side has them needing a strong defensive performance against Portland to get confidence back on their side. The Galaxy have conceded eight goals in the past three outings, and will need to be strong to limit Diego Valeri and his teammates from running rampant in Carson. With Chicharito still out, Victor Vazquez and Rayan Raveloson headline the offensive weapons to try and counter against Portland.

Portland saw a two-match winning run snapped by Minnesota United last weekend and will try to spark a move up the standings. Felipe Mora, Jeremy Ebobisse, and Diego Valeri have carried the scoring load over recent weeks, and all three will be eager to get after an inconsistent Galaxy backline. The Timbers have won three straight against the Galaxy, scoring three goals or more in each of those matches.

Despite both Orlando City and Atlanta United currently trying to snap out of recent funks, the offensive weapons for both teams should make Friday’s showdown a must-watch.

Rob Valentino’s side has failed to win in their last 10 outings in league play, but Josef Martinez’s return should help the Five Stripes gain some confidence. Martinez only has two goals in nine outings so far in league play and will be expected to headline the offensive chances at Exploria Stadium.

Orlando City has only won one in its past five matches, defeating the Philadelphia Union 2-1 before being trounced 5-0 by NYCFC. Oscar Pareja’s side is surely missing the impact of striker Daryl Dike, but still has Nani and Chris Mueller to lead the way. Antonio Carlos and Rodrigo Schlegel were horrendous against NYCFC meaning Robin Jansson could come back into the side to help deal with the ever-dangerous Martinez.

Sporting KC is gelling at the right time and Peter Vermes will be excited about this weekend’s date with FC Dallas.

SKC has won four of its past five matches, scoring two goals or more in each of those victories. Daniel Salloi is in superb form for the Western Conference club, scoring five goals in his past five appearances. Johnny Russell has also been key from the wing, chipping in two goals and one assist. Both players will look to have a field day against an FC Dallas backline which has conceded the fourth-most goals in the Conference.

FC Dallas snapped a four-match winless run last weekend with a 4-0 victory over the LA Galaxy, seeing Ricardo Pepi steal the show with his first-career MLS hat trick. Pepi has been one of the recent bright spots for Luchi Gonzalez’s side, as is the confident attacking play of Paxton Pomykal. After earning a clean sheet against the Galaxy, the FC Dallas backline will have some needed confidence to help keep Salloi, Russell, and others in check.