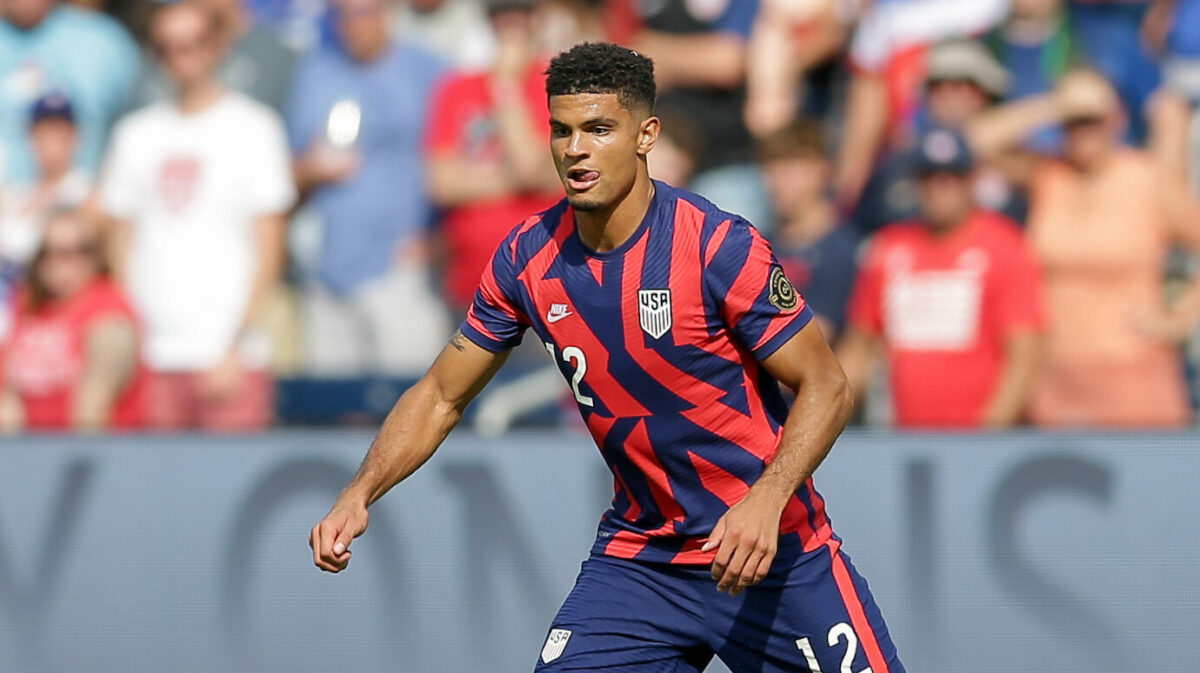 As the U.S. men’s national team celebrated its ridiculously early goal against Canada on Sunday, and the sold-out crowd at Children’s Mercy Park went crazy, you would never have imagined that the party-like atmosphere would only serve as the misleading start to an otherwise disappointing day for the Americans.

Winning is ultimately the goal, particularly in tournament play, so ignoring the fact the USMNT held on for a 1-0 victory over Canada would be foolish. Unfortunately, it would also be foolish to overlook the clear flaws, and failings exposed on a hot day in Kansas.

From Daryl Dike and Gianluca Busio delivering muted performances that should slow down the runaway nature of their bandwagons, to the entirely predictable struggles of Donovan Pines, who stepped into an emergency role due to a Walker Zimmerman injury and proceeded to justify all the concerns expressed when Gregg Berhalter made him one of the more surprising selections on the team, there were plenty of negatives to chew on.

There were also some very encouraging positives, including an inspired showing by Miles Robinson, who stepped up to lead a battered and fatigued defense and helped it hold on to its 1-0 lead. There was also James Sands flashing a masterful first 30 minutes in a hybrid centerback/defensive midfield role, a stretch when he looked like the best player on the field, but a level he wasn’t able to maintain as he wilted in the heat.

Here is a closer look at some of the key takeaways from Sunday’s USMNT win over Canada:

Donovan Pines came off the bench as an injury replacement for Walker Zimmerman in the 15th minute and the first 30 minutes he managed to hold his own and avoid mistakes. The second half was a far different story though, as the D.C. United defender was exposed on multiple occasions, offering a harsh reminder of just why there was major skepticism surrounding Berhalter’s decision to make him the team’s fourth centerback (which was second only to the inclusion of Jonathan Lewis on the roster in the ‘head-scratching selection’ department).

To his credit, Pines has had a strong season in MLS, and has put up some impressive stats, but his flaws aren’t a secret. He struggles in possession, which is an issue in Berhalter’s system, and he can be exposed in space by quick attackers, as he was against New York City FC in his final match before the Gold Cup.

Berhalter made the decision that Pines’ experience in a three-centerback system made him a more sensible pick over other options who are better on the ball, but who would have to be taught the intricacies of playing in a three-centerback setup, like Mauricio Pineda, Justen Glad, Auston Trusty and Henry Kessler.

The danger in that decision reared its head when Zimmerman went down with an injury and Berhalter found himself with a decision to make. Does he scrap the 5-3-2 system he deployed after just 15 minutes and insert Cristian Roldan to avoid using Pines, or would he give Pines a chance and therefore keep the same 5-3-2 that had dominated the early proceedings of the match?

Berhalter chose Pines, and while the final score will make that decision appear to have been the right one, what took place for the final 60 minutes of the match suggests Berhalter was extremely lucky to avoid punishment for that decision.

One of the goals of this Gold Cup for the USMNT was finding a central defender capable of competing for a starting role when World Cup qualifying roles around and Miles Robinson jumped to the front of the line in that race after his dominant showing against Canada.

The Atlanta United centerback was everywhere, showing himself to be adept at dealing with both physical attackers and speed ones with equal aplomb. He could manage one-on-one situations while also using his speed to provide cover for his teammates.

Does this mean Robinson has secured a starting role for World Cup qualifying? Not quite yet, but he has emerged as the top MLS option to replace the injured Aaron Long, and if he can continue playing at a high level the deeper the USMNT goes in the Gold Cup, then Robinson will put some real pressure on European-based options like Chris Richards, Mark McKenzie and Matt Miazga for that spot next to Brooks, either in a 4-3-3 or 5-3-2.

Dike and Busio take a step back

When the starting lineup was unveiled before Sunday’s match, the excitement over the inclusions of Gianluca Busio and Daryl Dike was palpable and understandable. Both youngsters had been very impressive, and to many USMNT fans, they appeared destined to dominate their way through the Gold Cup if just given the chance.

It didn’t quite work out that way on Sunday, as both players struggled to deal with Canada, and in Busio’s case, with the hot conditions, which may have contributed to him fading in the match.

Berhalter gave Busio more freedom to get forward early in the match, with James Sands pushing into midfield to let Busio roam. Early on that worked well and Busio appeared to make good use of the freedom, but as the match went on Busio struggled to get a hold of the match, and eventually disappeared to the point of needing to be replaced in the 74th minute.

By no means was Busio the only USMNT midfielder to fade from view– Kellyn Acosta also struggled and left the match when Busio did. Canada’s experience edge in midfield was clear to see, even with John Herdman initially resting regular midfield starters Mark-Anthony Kaye and Jonathan Osorio with an eye toward the quarterfinals.

Does that mean we won’t see Busio start again in the knockout rounds? He should see more opportunities, but Berhalter will have to consider shifting Kellyn Acosta into the starting defensive midfield role, especially after Acosta’s lackluster showing in a more advanced role.

As for Dike, he had his moments where he was close to breaking through, but he also showed some of the weak points in his game, including his hold-up play and first-touch. He wasn’t able to physically dominate Canada the way he did Martinique, and the ability of Canada’s defenders to neutralize the Orlando City striker provided a needed reminder that, while Dike has been an exciting prospect to watch in recent months, and clearly has the talent to enjoy a bright future with the national team, he is far from the finished product.

In fact, it was Gyasi Zardes who looked the sharper of the two when it came to hold-up play, and putting himself into good positions to facilitate attacking movements. Zardes did so despite having to operate in wide channels in order to give Dike the central area to work in. To be clear, Zardes didn’t have a dazzling showing either on a day when the USMNT failed to register a shot on goal after the early goal, but if Berhalter only starts one of the two in the quarterfinals, Sunday’s performances should give Zardes the edge.

Sands shows off his intriguing versatility

When James Sands started setting up shop in the USMNT midfield, at least a few observers had to wonder if he was making a mistake, but nope, the New York City FC was very clearly instructed to set up in midfield when the Americans had the ball, and drop deep when it was time to defend.

For the first 30 minutes, that libero-esque position suited Sands perfectly and he played it as well as Berhalter could have wanted. Sands gave the Americans a clear advantage in midfield, and the Canadians struggled to deal with it before making their own tactical adjustment to push more numbers into central midfield.

Sands influence in the match faded though, as he became one of the players clearly affected by the hot conditions at Children’s Mercy Park, but he still showed more than enough to leave Berhalter excited at the possibilities he has with Sands emerging as an option for World Cup qualifying.

What Sands give Berhalter is the kind of calm distributor and organizer in the heart of a 5-3-2 that can allow him to play the system when the full-strength USMNT squad is together, and the rest of the Gold Cup will give Sands a chance to strengthen his case for not only making the World Cup qualifying squad, but starting on that team.

When Reggie Cannon announced that he was back to 100 percent on Saturday, that sounded like it would signal the end of Shaq Moore’s run at the Gold Cup, but instead, it was Moore who made his third straight start on Sunday, and he responded by scoring a goal just 20 seconds into the match.

Moore held up well playing as a right wingback and only served to strengthen his already-impressive Gold Cup. He showed off both his attacking quality and defensive strengths, and did so against a clearly stronger opponent than his previous two matches.

Will that be enough to keep earning starts when Cannon is back in action now? That will be difficult, but the fact we are even asking the question tells you just how far Moore has come in the past two weeks.