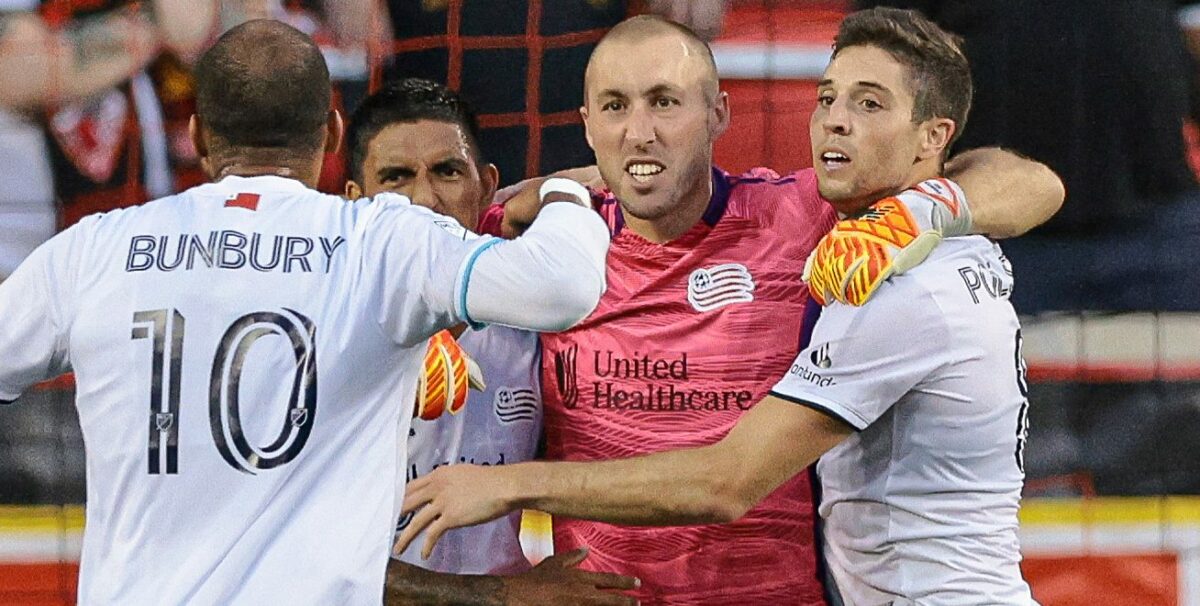 The New England Revolution continued their impressive run at the top of the Eastern Conference table, fighting back late at Red Bull Arena to claim three points over rivals New York Red Bulls.

Adam Buksa’s stoppage time winner propelled the Revs to a 3-2 triumph in Harrison, New Jersey, extending the Revs winning run to four straight. New England now sits eight points clear over second place Orlando City, showing once again they are a force to be reckoned with in MLS.

For the first time in close to three months, the San Jose Earthquakes got to savor a victory in league play.

Matias Almeyda’s side downed the Seattle Sounders 1-0 at Lumen Field thanks to a first half goal from Cristian Espinoza. Despite seeing a second goal waived off in the dying stages by VAR, the Quakes snapped an 11-match winless run and moved to ninth place in the Western Conference table.

Inter Miami picked up an important win on Saturday night, using a brace from Gonzalo Higuain to defeat CF Montreal 2-1. Phil Neville’s side snapped a seven-match winless run and now heads into an in-state derby vs. Orlando City on August 4.

Elsewhere, the Colorado Rapids picked up three points at Q2 Stadium over struggling Austin FC while FC Cincinnati and DC United earned one point apiece in a scoreless draw at TQL Stadium. The Philadelphia Union only could earn one point against the 10-man Chicago Fire on Sunday night at Subaru Park.

Here’s a closer look at this weekend’s MLS results:

Man of the Match: Kai Wagner. Wagner scored the Union’s only goal of the match on a wicked free kick and overall was the most dangerous threat in providing service into the box.

Moment of the Match: Ale Bedoya had a golden opportunity to win the match for the Union in stoppage time, but saw Bobby Shuttleworth get down to deny the veteran.

Match to Forget: Daniel Gazdag. Gazdag put himself in good areas on the pitch, but lacked the ability to truly put the ball in the back of the net. Gazdag missed all three of his shot attempts, and was defended well by the Fire’s midfield and defenders all night.

Man of the Match: Robert Castellanos. Castellanos scored his first-career MLS goal to earn Nashville SC a point while also being strong defensively against Jozy Altidore. He made 14 clearances and also won four of his five aerial battles against the USMNT forward.

Moment of the Match: C.J. Sapong had the best chance in the second-half for either side, but Alex Bono repelled the forward’s effort in the 74th minute to keep TFC tied.

Match to Forget: Randall Leal with quiet for Nashville SC, failing to register a shot on goal before being replaced in the 77th minute. It was a shocking performance from the attacking playmaker.

Man of the Match: Adam Buksa delivered the winning goal for the Revolution and came close to scoring earlier in the match as well. Buksa won 14 individual duels and also hit the crossbar before scoring the winner in second half stoppage time.

Moment of the Match: Buksa’s goal truly deflated the Red Bulls players and fans after seeing a 2-1 lead evaporate in the final 10 minutes. The Revs have now won four matches in a row and sit comfortably atop the Supporters’ Shield standings.

Match to Forget: Patryk Klimala was poor on the night for New York, failing to register a shot on goal in his 58-minute shift. The Polish forward was muscled off the ball on several occasions and overall just didn’t bring the same abilities to the field as in previous matches.

Man of the Match: Florian Jungwirth. Jungwirth registered the lone assist of the match and overall was all over the field for San Jose. He won all three of his aerial battles and made four clearances, helping the Quakes keep an important clean sheet.

Moment of the Match: Espinoza’s goal was the only bright moment in the match, giving San Jose a lead to sit on for the second half. Seattle struggled to get anything going in the final third after halftime and overall finished with a second-straight home defeat.

Match to Forget: Joao Paulo had a golden opportunity to help his team equalize in the second half, but instead of playing a free kick into the box, decided to go for goal and missed entirely. Paulo did the most of the work for Seattle in attack, but some of his decision-making wasn’t the best in the final third.

Man of the Match: Gonzalo Higuain. Inter Miami’s star striker helped turn the game on its head, scoring twice in the second half to rally his side to its first victory in eight games.

Moment of the Match: Potent Winner. Higuain authored the decisive strike in the 69th minute, hitting a strong shot from distance that CF Montreal goalkeeper James Pantemis could not keep from looping into the goal after getting a hand to the ball.

Match to Forget: Mason Toye. The CF Montreal forward not only missed the frame on a glorious chance in the second half that would have made it 2-1 in his side’s favor, but he overall struggled to influence proceedings.

Man of the Match: Yordy Reyna was lively in his 76-minute shift. Two of his three shots were on goal and he was good for an 89% passing rate from the no. 9 role.

Moment of the Match: Moses Nyman took a walk on the wild side when he was dispossessed by Cincinnati’s Brenner on a breakaway in the 52nd minute. He was the last man standing and earned a red card for his tackle which was deemed a denial of a clear goal-scoring opportunity.

Match to Forget: In a largely uneventful scoreless evening, Nyman’s miscue will be illuminated, especially after nearly scoring his first-ever MLS goal in the first half.

Man of the Match: Memo Rodriguez will feel hard done by to not have scored against Real Salt Lake, hitting the crossbar once and racing all over the field at BBVA Compass Stadium. Rodriguez won the most tackles (3) and the most individual battles (8) in the match, being the only major offensive threat for either side.

Moment of the Match: Albert Rusnak had the best offensive chance in the second half for either club, but struck the left post after a superb set up from Justin Meram.

Match to Forget: Justen Glad. The RSL center back was sent off in the 87th minute after receiving a second yellow card, forcing his teammates to close out the draw with 10 men. It could’ve been worse for Glad had the Dynamo taken advantage, but overall now a smart decision in the final stages to be sent off.

Man of the Match: Paxton Pomykal continues a strong season with the opening goal in this game. Pomykal also had two key passes in a dominant attacking showing from FC Dallas.

Moment of the Match: Jesus Ferreira put FC Dallas ahead by two goals in the 51st minute when he uncorked a curling shot into the upper right corner.

Match to Forget: Sporting KC centerback Andreu Fontas couldn’t recover into a good position to block either goal from Paxton Pomykal or Jesus Ferreira. Both were impressive long-range goals, but Fontas could have reacted more quickly to block the shot.

Man of the Match: Andre Shinyashiki delivered the lone goal at Q2 Stadium, giving Colorado a third victory out of its past five matches. Shinyashiki caused countless issues for Austin FC’s backline and spent the final minutes of the match watching from the bench as the Rapids sealed the road win.

Moment of the Match: Hector Jimenez’s long-range shot in the 52nd minute forced William Yarbrough into a top save, but was honestly Austin FC’s most dangerous effort in Colorado’s half of the field.

Match to Forget: Tomas Pochettino missed all three of his shots on goal, despite getting into dangerous spots on the field. The Argentine will be disappointed that he couldn’t help Austin FC pick up at least one point.

Man of the Match: Keaton Parks. Parks scored the third goal for NYCFC on the night and also delivered a strong performance in the heart of Ronny Deila’s midfield. He helped shut down the playmaking abilities of Lucas Zelarayan and Darlington Nagbe, winning two tackles and making three interceptions.

Moment of the Match: The Crew were already in trouble heading into halftime and Parks’ goal truly sucked any comeback hopes out of the squad. Columbus was outplayed all over Yankee Stadium and saw its six-match unbeaten run snapped as a result of it.

Match to Forget: Jonathan Mensah normally holds his own against opposing forwards in MLS, but on Friday he was put under countless pressure by Valentin Castellanos, who scored for the second match in a row.

Moment of the Match: Nani’s goal continued Atlanta United’s struggles, costing the Five Stripes a chance at an important point on the road. His finish via a header in the box, completed the comeback for the Lions, helping them pick up a second victory out of the past three matches.

Match to Forget: Matheus Rossetto played the entire match for Atlanta United, but overall struggled to get anything going for the club. He lost possession three times (game-high) and was outdone by Maurcio Pereyra, who has a strong evening.

Man of the Match: Julian Araujo. Araujo was one of the many impact performers for the Galaxy, but the 19 year-old right back had two assists on the night and locked down the right side of the Galaxy defense.

Moment of the Match: In the 27th minute Rayan Raveloson scored his fourth goal for the Galaxy this season with a tremendous bicycle kick effort off on a corner for the early 1-0 lead.

Match to Forget: Larrys Mabiala. It was a tough night for the entire Timbers backline, but Mabiala conceded a penalty in the second half and did nothing to slow down the Galaxy attack.

Man of the Match: Cristian Dajome. The Colombian midfielder first scored off a precise pass from Russell Teibert in the first half. Then he buried the equalizing penalty kick in the final seconds to steal back a point for the Whitecaps.

Moment of the Match: Minnesota United seemed to have grabbed control of the match in the second half, until the final seconds. Ethan Finlay brought down Dajome, leading the referee to call a penalty kick.

Match to Forget: Ethan Finlay. Finlay brought the Loons level to end the first half, but committed a foul to allow the equalizing penalty in the final seconds. It may have been a close penalty call, but Finlay went hard into a dangerous tackle in the box.