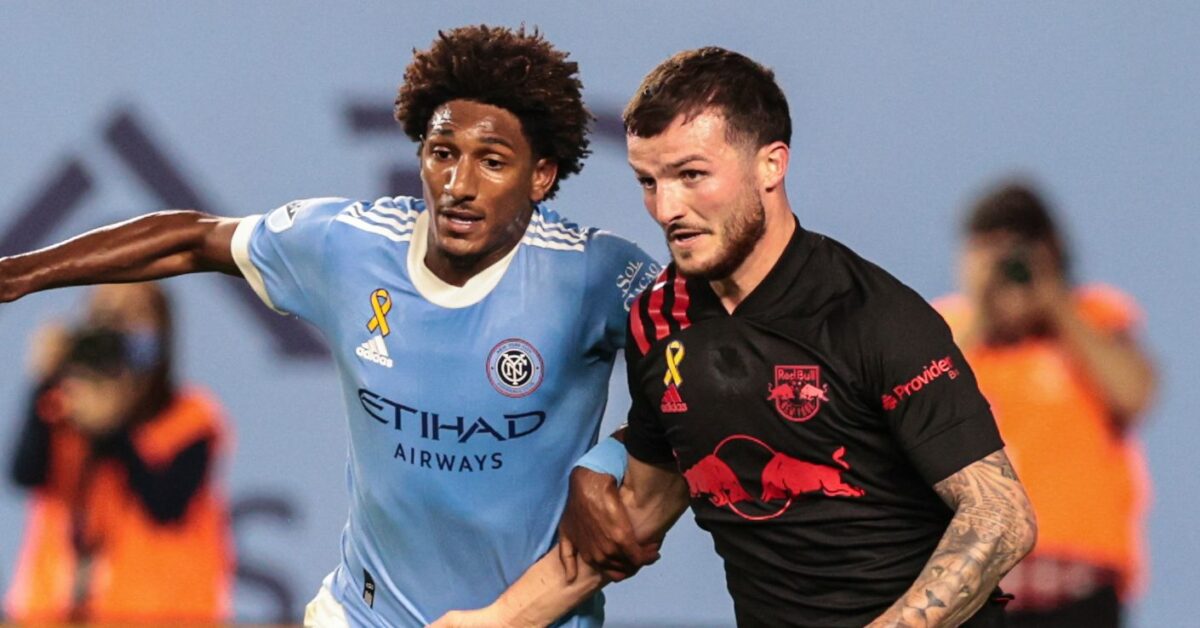 The New York Derby will have some extra spice in Sunday’s edition of the rivalry, as the New York Red Bulls face New York City FC with a chance to pull even on points with their slumping neighbors.

Major League Soccer’s schedule this weekend is headlined by NYCFC’s latest visit to Red Bull Arena, where the Red Bulls are suddenly surging while NYCFC is in a rut.

Gerhard Struber’s squad are unbeaten in six-straight and have posted back-to-back victories to move up the table. NYCFC sits in sixth place, with just one win in its past eight matches.

Saturday’s schedule is headlined by the latest installment of the Rocky Mountain Cup between Real Salt Lake and the Colorado Rapids. 12 points separate the teams in the Western Conference standings as both are coming off opposite results last weekend. Colorado aims to stay in the hunt for first place while RSL is jam-packed in the middle of the race to stay in the top-seven.

Three points separate the New York Red Bulls and NYCFC in the Eastern Conference table, something both teams will aim to earn by Sunday’s end.

NYCFC sits in sixth place in the standings, but need to straighten up with only six matches left to play. Ronny Deila’s side have failed to win any of their last four matches, scoring only one goal in that span. Valentin Castellanos has 13 goals this season and will be one of the lead men for NYCFC on the road this weekend.

The New York Red Bulls are on the outside looking in as Gerhard Struber’s side aims claim a second-straight win over their East Coast rivals. New York is unbeaten in six straight and will be confident to grind out a third-consecutive win. Omir Fernandez has two goals scored in his last four outings while Patryk Klimala has eight goals in his first MLS campaign. Defensively, the Red Bulls have been one of the best over recent weeks, conceding only twice in the last 450 minutes.

The Colorado Rapids are still a slight ways out of the top spot in the Western Conference, but Robin Fraser’s group are still alive heading into Saturday’s Rocky Mountain Cup tie at Real Salt Lake.

Colorado fought back to down Minnesota United 3-1 last weekend, in what Fraser hopes will be a new unbeaten run. Cole Bassett and Michael Barrios helped spark the comeback victory, giving the Rapids a strong chance of finishing in the top three. Kellyn Acosta’s return from international duty will be a boost in midfield as the Rapids aim for a second-straight win in the rivalry.

Real Salt Lake sits in fifth place and are hoping to avoid any slips down the table. Two losses out of the past three matches will have RSL slightly nervous ahead of Saturday’s showdown at Rio Tinto Stadium, but points are at a premium with six matches left this season. Damir Kreilach is RSL’s best attacking threat with 13 goals scored, including four-straight appearances with a goal.

The LA Galaxy come into the weekend above the red line in the Western Conference, but a defeat against Portland on Saturday could see them drop out of the playoff places.

A nine-match winless run for Greg Vanney’s side has them needing a strong defensive performance against Portland to get confidence back on their side. The Galaxy haven’t won since August 14, losing three of their last four matches against Western Conference opponents. An inconstant backline means the attack will need to be lively for the Galaxy as Javier Hernandez and Samuel Grandsir are among the lead choices to start.

Portland’s four-match winning run has come at a great time, boosting the Timbers to fourth place and nine points clear of eighth place Vancouver. Dairon Asprilla has scored in three of his last four outings for Giovanni Savarese’s side, while Jaroslaw Niezgoda has scored in two of last four. The Timbers saw a three-match winning run against the Galaxy snapped in July and will be keen in exacting revenge on Saturday in Carson.

Five points separate the Philadelphia Union and CF Montreal in the East standings with both teams coming in on opposite runs of form.

Jim Curtin’s group are unbeaten in their last five, recently seeing six Homegrown players feature in last weekend’s 2-1 road win over FC Cincinnati. Paxten Aaronson and Nathan Harriel were among the standout stars for the defending Supporters’ Shield winners, but the return of several international players could see those two back on the bench. The Union have won two of their last three road games at Montreal.

CF Montreal snapped a two-match losing run by defeating Atlanta United 2-1 to remain in the top-seven of the East. Wilfried Nancy will be without Romell Quioto who missed international duty for Honduras with an injury. Anything less than a victory could see the Canadian club dropped out of the top-seven, with only one point separating them from Atlanta United in eight place and the Red Bulls in ninth place.

Two teams on the outside of the Western Conference playoff picture will hope for three points to spark them up the table.

LAFC welcomes the San Jose Earthquakes to town on Saturday, looking to avoid further disappointment this season. Bob Bradley’s bunch have failed to win any of their last four matches, losing twice to Portland and once to San Jose over that span. Carlos Vela and Eduard Atuesta are expected to see some minutes this weekend after recovering from respective injuries, which would be a huge boost for LAFC.

San Jose sits one point behind LAFC in the West, needing something to boost them back into the top-nine. Back-to-back defeats to Seattle and Vancouver have seen the Earthquakes stumble below the red line, but a win on the road could be the spark that Matias Almeyda’s side needs to reach the postseason. Javier Lopez has three goals in his last four outings, but the Mexican winger will need help from Cade Cowell and others.