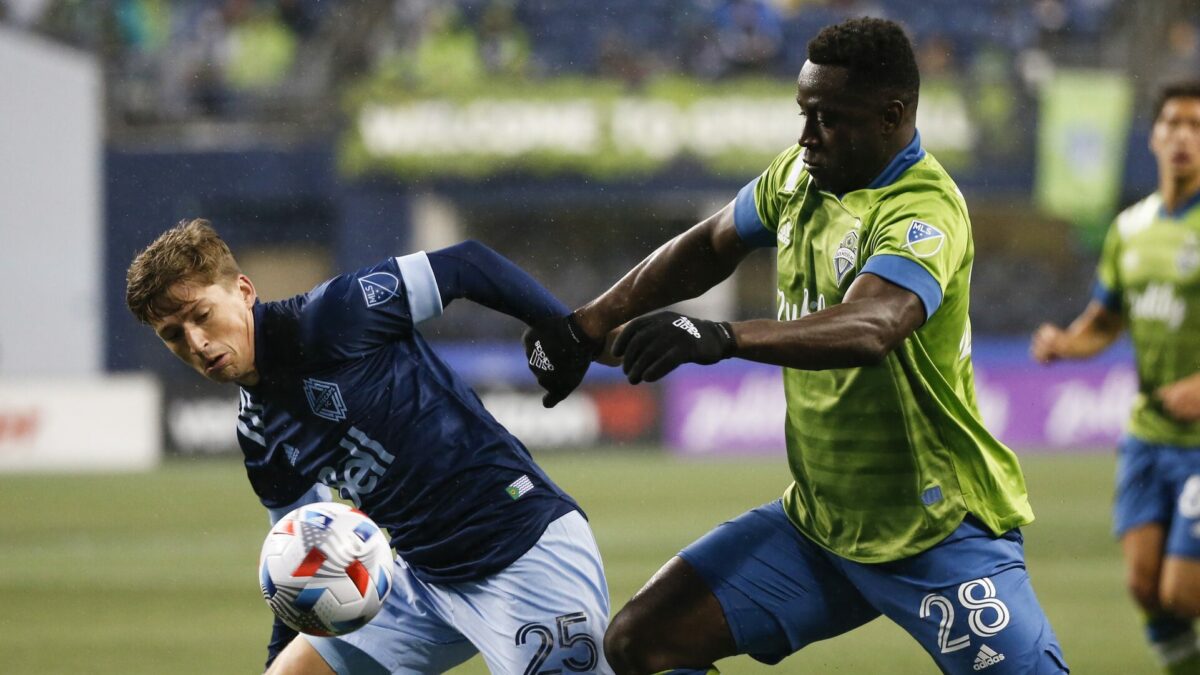 Playoff spots and playoff seeds are up for grabs on Sunday as MLS Decision Day features some all-or-nothing clashes, where a win can mean playoff life and a loss means an early vacation.

Los Angeles FC sits on the outside of the Western Conference playoff picture and will need to defeat the Colorado Rapids, while also getting some help from some other results. Bob Bradley’s side is unbeaten in six straight matches and will need to avoid a draw or a loss for any shot of keeping their season alive. The Rapids need a win for any chance of claiming the No. 1 seed in the West.

The Seattle Sounders will play in one of the weekend’s more meaningful clashes, taking on a Vancouver Whitecaps side that can secure a playoff berth with a win. The Whitecaps have been one of the success stories of the final weeks of the regular season, but they will be facing a Sounders side vying for the top seed in the West, and also a team getting healthy at just the right time, with Nicolas Lodeiro, Raul Ruidiaz and Jordan Morris now back.

Sporting Kansas City also remains in the hunt for the No. 1 spot in the West, but needs to rebound against Real Salt Lake for any chance of capturing it. Back-to-back defeats to Minnesota United and Austin FC have hampered SKC’s chances of leapfrogging the Seattle Sounders, but Peter Vermes’ side will be confident at home. Real Salt Lake comes to Kansas needing a victory paired with other results for any chance of clinching a playoff berth. Consecutive defeats for the visitors haven’t helped their chances in recent weeks and RSL’s last road win in Kansas City was in 2016.

The “Win and You’re In” matches to watch are Minnesota United’s visit to the LA Galaxy and Orlando City’s trip to CF Montreal. Atlanta United faces a win-and-in situation with its visit to FC Cincinnati.

The Eastern Conference already has its top seed decided with New England Revolution’s record-setting Supporters’ Shield run, but there are plenty of seeds up for grabs, and two top matches will go a long way toward determining the top seven. The Philadelphia Union’s trip to Yankee Stadium to face NYCFC has major seeding implications in the East, while the Red Bulls know a win in Nashville –where no visiting team has won in 2021 — would ensure a playoff berth, while Nashville could secure the number two seed with a win and Union loss or tie.

Here’s a closer look at the top Decision Day matches to watch on Sunday:

The Colorado Rapids’ quest of earning the No. 1 seed in the West comes down to Sunday with a Decision Day clash against LAFC.

Robin Fraser’s side rebounded with a 1-0 win over the Houston Dynamo last weekend, staying just behind Seattle and Sporting KC for the top spot. Dominque Badji’s return to the club has certainly helped during the second-half of the season, with the veteran forward notching three goals in his last four appearances. Colorado has lost its last two head-to-head matches against LAFC, but will need a win for any chance of earning a first round bye.

LAFC’s playoffs hopes comes down to Sunday’s trip to Colorado, needing a 13th win of the season to have a chance at postseason play. Bob Bradley’s side are riding a six-match unbeaten run coming into the match, but draws against Minnesota and Vancouver haven’t helped them get above the red line. Cristian Arango’s 13 goals have boosted LAFC in recent weeks while a healthy Carlos Vela should give the visitors a major spark.

Both the Philadelphia Union and NYCFC will be pushing for the No. 2 seed in the Eastern Conference, knowing neither can catch New England for the top spot.

Ronny Deila’s side have won three matches in a row, scoring three or more goals in two of them. Valentin Castellanos received slack earlier in the year for his cold drought in front of goal, but since the Argentina striker has been red hot. Castellanos has five goals in his last three outings, and overall has 18 this season. He will be the go-to man for NYCFC at Yankee Stadium, knowing the Union have had zero luck claiming a win in the Bronx.

The Union are unbeaten in three-straight, most recently defeating FC Cincinnati 2-0 in Chester. Daniel Gazdag and Paxten Aaronson both found the scoresheet in that match, but the Union will be without Aaronson’s services, along with Quinn Sullivan and Jack McGlynn due to international duty. Kacper Przybylko leads the team with 11 goals, but only has one tally in his last five appearances, so a strong performance would be welcomed ahead of playoff time.

Sporting Kansas City has slipped up in consecutive matches and now faces a must-win for a shot at earning the No. 1 seed in the West.

Losses to both Minnesota United and Austin FC will not sit well with Peter Vermes and his players, after earning two of their more-impressive wins just prior. Johnny Russell and Daniel Salloi remain key to SKC’s attack, but defensively things will need to tighten up especially with the playoffs right around the corner. Graham Zusi is a veteran leader in the backline while Tim Melia remains one of the top shot-stoppers in MLS.

Real Salt Lake hasn’t found much success in recent years in Kansas City, but needs to win for any chance of reaching the playoffs. Sitting two points back of seventh place L.A. Galaxy, RSL has lost three of its last four matches, which has seen them drop just below the red line. Albert Rusnak and Damir Kreilach remain two deadly options offensively, but RSL will need help from others in a do-or-die situation.

Three points separate CF Montreal and Orlando City in the East and the hosts know a win paired with other results would see them jump above the red line.

A 2-0 win over the Houston Dynamo helped CF Montreal snap out of its winless funk, giving them a shot on Sunday at Stade Saputo. Unlikely scorers Rudy Camacho and Kamal Miller helped the Canadian club stay alive in the playoff picture, but a test against sixth place Orlando City won’t be easy, especially with the visitors not guaranteed a playoff spot of their own just yet.

Orlando City sits slightly above the red line, but a defeat to Montreal paired with other results could see them drop out of the top seven. The Lions have failed to win any of their last four matches, earning draws in three of the four. Oscar Pareja won’t be particularly happy with the team’s play of late, but Daryl Dike’s good run of form is a promising sight for a must-win match.

It will be an intriguing showdown from Dignity Health Sports Park on Sunday as the L.A. Galaxy and Minnesota United both aim to clinch a playoff spot.

The Galaxy sit two points clear of eighth place Real Salt Lake and will need to try and win to avoid a slip-up. A draw against the Seattle Sounders helped a bit, but overall the Galaxy will need to be wary of a Loons side who will be eager to win themselves. Javier Hernandez has scored or assisted in each of the last four matches, giving Greg Vanney an in-from player to rely on.

Minnesota United has won three of their last five matches overall, giving them a good chance of reaching the playoffs. A 2-1 win over Sporting KC was much-needed for the Loons at home, moving them three points clear of RSL with one match to play. Ozzie Alonso’s suspension will hurt the Loons on the field, but Adrian Heath’s squad will need to be up for the challenge to earn a first-ever win in Carson.

Here’s a full look at the Decision Day schedule: