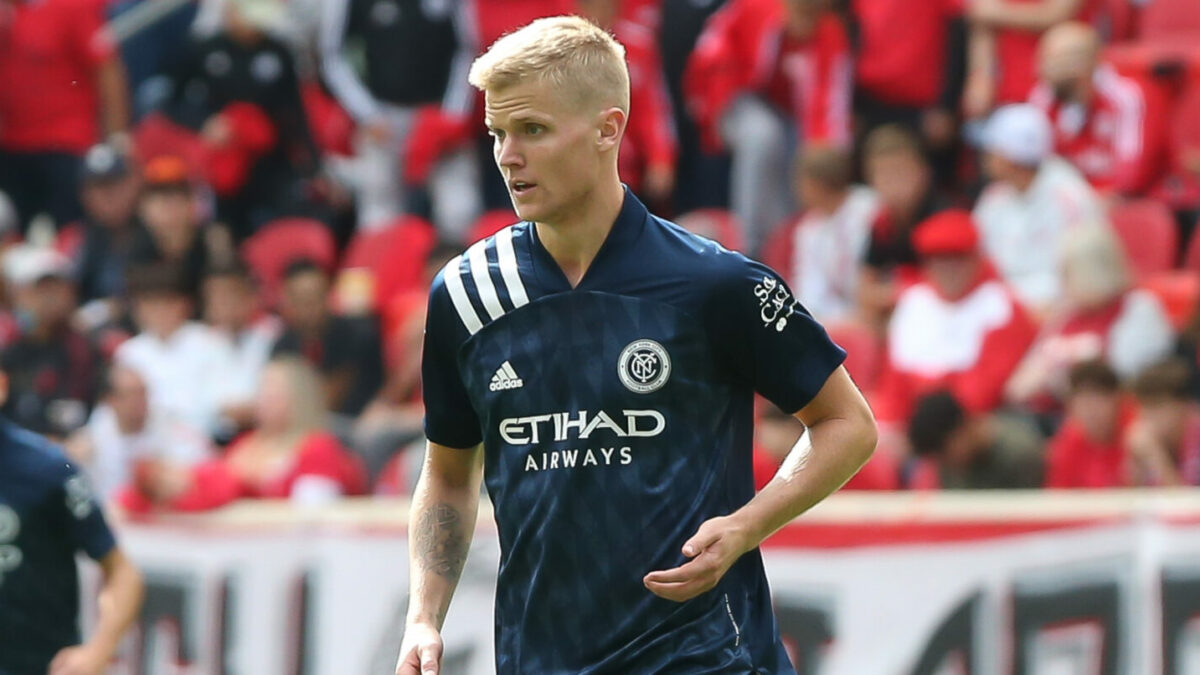 New York City FC will aim for a lengthy playoff run this fall but will have to do so without one of its consistent starters.

Keaton Parks has been ruled out for the MLS Cup Playoffs after undergoing surgery Tuesday to remove a blood clot from his right leg. Parks is expected to begin rehabilitation immediately and will be back with NYCFC during 2022 training camp.

Parks, 24, has logged 2,444 minutes in 31 league appearances for Ronny Deila’s side this season, scoring four goals. The Texas native has continued to grow into a regular contributor for NYCFC, but his absence leaves a major hole in the heart of the club’s midfield.

NYCFC closed out the 2021 regular season with a 1-1 draw with the Philadelphia Union, earning them the No. 4 seed in the Eastern Conference. The club is set to host Atlanta United on November 21 at Yankee Stadium, knowing a victory would set them up with a semifinal round showdown against Supporters’ Shield winners, New England Revolution.

Gustavo Bou has played a major role in the New England Revolution’s resurgence up the MLS standings and was rewarded Tuesday with a new contact.

Bou signed a two-year contract extension Tuesday, which will keep him in Foxborough through the 2023 MLS season. He will continue to occupy both a Designated Player and international roster spot on the club’s roster.

“Gustavo has been an essential part of our team since his arrival in 2019 and he has proven to be among the league’s most prolific attacking players,” said Revolution Sporting Director and Head Coach Bruce Arena. “We are pleased to extend Gustavo’s tenure here in New England and look forward to his continued contributions to our team.”

Bou arrived in MLS in July 2019, and since has totaled 29 goals and 14 assists across 62 regular season appearances. He has also added three goals and one assist in five postseason appearances for the Revolution, who enter the playoffs as the No. 1 seed overall.

The Argentinian’s 24 combined goals and assists in 2021 are tied for the fourth-most in MLS. Bou was named the league’s Player of the Month for July and his 15 goals scored finished tied for ninth in the MLS Golden Boot race.

Bou and his Revolution teammates will have a two-week break after earning the No. 1 seed and will face either NYCFC or Atlanta United in the East semifinal round.

Chris Leitch has held numerous roles with the San Jose Earthquakes over the past 13 years and will now move into a new role going forward.

San Jose announced Monday that Leitch has been named the new general manager of the club. Leitch played for the Earthquakes from 2009-11, served as technical direction from 2012-21, interim general manager in 2016 and head coach in 2017

“I couldn’t be more excited for this opportunity,” said Leitch. “This club has been my family since 2009 and I’m passionate about the project we have underway. While the 2021 season didn’t end how we wanted, we’re entering an important offseason to rebuild and put a competitive team on the field for our fans to support.”

Leitch played in MLS for ten years, before joining the Earthquakes academy as technical director in 2011. His continued oversight of the team’s academy has seen several young players earn opportunities at the first-team level including Cade Cowell, Nick Lima, JT Marcinkowski, and others.

Following the departure of general manager Jesse Fioranelli in June, Leitch retained his title of technical director but assumed control of the team’s soccer operations. San Jose went unbeaten in Leitch’s first 10 matches at the helm (3-0-7), but eventually struggled down the stretch and failed to make the playoffs this fall.

Leitch will hope to lead the Quakes into a stronger season in 2022 knowing longtime forward Chris Wondolowski will not be a part of the roster following his retirement.

CF Montreal and Toronto FC now know when they will square off for the 2021 Canadian Championship trophy.

Stade Saputo will play host to the 2021 final, which will take place on Sunday, November 21 at 1 p.m. ET. Both teams will seek to end their competitive schedules on a high note, knowing the winner will clinch a berth in the 2022 Concacaf Champions League.

“The Canadian Championship is the pinnacle event for professional clubs in Canada with a direct entry to the 2022 Concacaf Champions League and an expanded footprint with 13 clubs across four leagues,” said Canada Soccer President Nick Bontis in a press release. “We look forward to crowning a champion in 2021 and wish to congratulate all participating teams in 2021 under fluid circumstances in respect of COVID-19.”

CF Montreal and Toronto FC have combined to win the last four Canadian Championships and the hosts will have a slight edge in recent head-to-head matchups. CF MTL defeated TFC in two of its three MLS meetings this season.

Both teams advanced to the final after eliminating Canadian Premier League opposition in both the quarterfinal and semifinal round. With both teams failing to make the MLS Cup Playoffs, the Canadian Championship will be a positive boost heading into the offseason this winter.