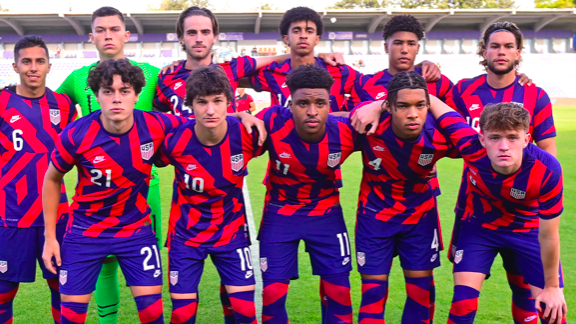 Playing its first game since January 2020, hiring a new head coach five days ago and facing a loaded Brazil team that practiced together for the last two weeks, the U.S. under-20 men’s national team was never going to have it easy in its opening match of the Revelations Cup.

Brazil rolled to score three first-half goals and one after halftime to thoroughly outplay the Americans in a 4-0 romp, handing new USMNT U-20 coach Mikey Varas a loss in his first match as head coach.

Marcos Leonardo opened the scoring for the Brazilians in the 12th minute, beating Chicago Fire goalkeeper Gabriel Slonina from close range with a right-footed that found the back of the net.

Seven minutes later, American defender Casey Walls collided with Marlon Gomes, gifting Brazil a penalty that was converted by Leonardo, giving the Santos forward a brace for the time being and a 2-0 lead to Brazil.

Pressure from the Brazilian wingers continued to prove too much for the American defense to handle with midfielder Keven adding a third for Brazil in the 42nd minute. Leonardo wasted little time in the second half, completing his hat trick in the 52nd minute and truly icing the victory for Brazil.

After the scoreline was out of reach, the U-20’s had a few nice moments of possession lead by Philadelphia Union midfielder Paxten Aaronson, but the lack of cohesion in creating well- worked attacks showed.

In terms of other positives, Slonina made a handful of big saves to keep the score at just 4-0, while Slonina’s Fire teammate Erick Gutierrez and Union Berlin forward Malick Sanogo showed glimpses of their attacking abilities as substitutes.

The Americans will look to rebound on Saturday against Colombia in Matchday 2 of the Revelations Cup. (4:30 p.m. ET)