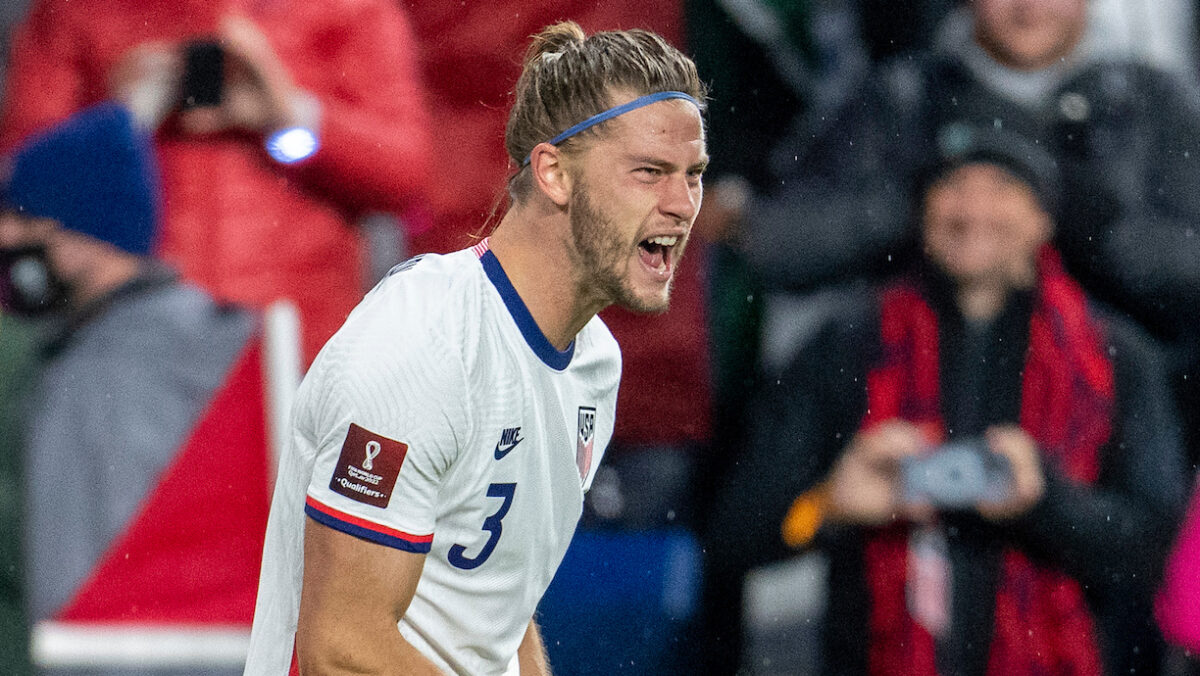 When the Octagonal round of Concacaf World Cup qualifying began in September, Walker Zimmerman would not have been projected to emerge as a starting centerback in Gregg Berhalter’s qualifying plans, but the Nashville SC has done just that, playing a key role in the USMNT’s run to first place in qualifying table.

Zimmerman heads into Tuesday’s World Cup qualifier at Jamaica as Berhalter’s most-experienced centerback, with the Americans looking to claim a second straight win in the November window. The Nashville SC defender was not initially called into the October qualifiers, but an injury to John Brooks opened the door for him to return to the fold and he took full advantage. Since then, Zimmerman has started in three of the USMNT’s last four qualifiers, playing key roles in a pair of home shutout victories, including Friday’s 2-0 home win over Mexico.

“Walker was one of those guys that got his opportunity and played a great game against Jamaica in that first game and then played a very solid game against Mexico,” Berhalter said about Zimmerman. “Really happy for Walker, he’s a great guy off the field, he’s a good veteran leader in this group and we really need him.

“In terms of his performance, I thought it was strong against Mexico and it was really strong against Jamaica [in October’s home qualifier]. He gives us a good aerial presence, he does well in the build-up play and was able to defend in transition well against both teams.”

Since debuting for FC Dallas back in 2012, Zimmerman has totaled 219 career appearances in MLS, moving on to LAFC from 2018-19 before embarking to Nashville SC ahead of its debut MLS campaign in 2020. Zimmerman has been the rock of Gary Smith’s backline, helping the Eastern Conference club post back-to-back playoff appearances, and rank in the top-five in MLS for the fewest goals conceded over the past two seasons.

Zimmerman has carried that form over to the USMNT, where he’s been a physical presence both in defense and on set pieces, while helping silence some of the top attacking players in the region. Zimmerman has credited his mindset and work ethic for getting himself back into the national team fold.

“I don’t feel like I am doing anything differently outside of my comfort zone,” Zimmerman said. “I was able to work on possession-based formations with LAFC and now with Gregg since he’s taken over the national team, that’s become more of an emphasis. I tried to focus more on being able to pass and break lines, but I don’t come into camp thinking I have to just focus on that to make the team. It’s trying to play my game consistently and play within my strengths.

“I was certainly disappointed not to be called in for October’s camp, especially since I did not play in September so I felt I really didn’t get a chance to prove myself,” Zimmerman said. “24 hours after that conversation, I got a call back and was able to come into camp and since then it’s about having the right mindset and being ready for when that opportunity comes.”

Tuesday’s clash with Jamaica will be different than October’s 2-0 victory for the USMNT, especially with the Reggae Boyz featuring a pair of dangerous attacking weapons who weren’t around in October. West Ham United striker Michail Antonio and Leon Bailey did not travel with Jamaica in October due to the Premier League’s COVID-19 protocol, but both are expected to start on Tuesday, with Antonio coming off scoring his first international goal in Friday’s 1-1 draw with El Salvador.

Bailey, Shamar Nicholson, and Bobby Reid are other attacking options that Zimmerman could likely see on Tuesday night, all potential game-changers for Theodore Whitmore’s side in Kingston. Zimmerman and the USMNT will still be riding high following their move back to first place in the octagonal round standings, but will be focused on the goal at hand before entering a nine-week break before the final months of qualification begin.

“[Michail] Antonio is a big part of what they do in the attacking third and he’s a physical presence,” Zimmerman said. “They certainly have a couple of attacking pieces that are able to create chances, so for us it’s about not letting the last game affect what we’re doing this game. It’s another chance at three points and it’s a big opportunity for us to climb up in the standings and put ourselves closer to the ultimate goal of qualification.”