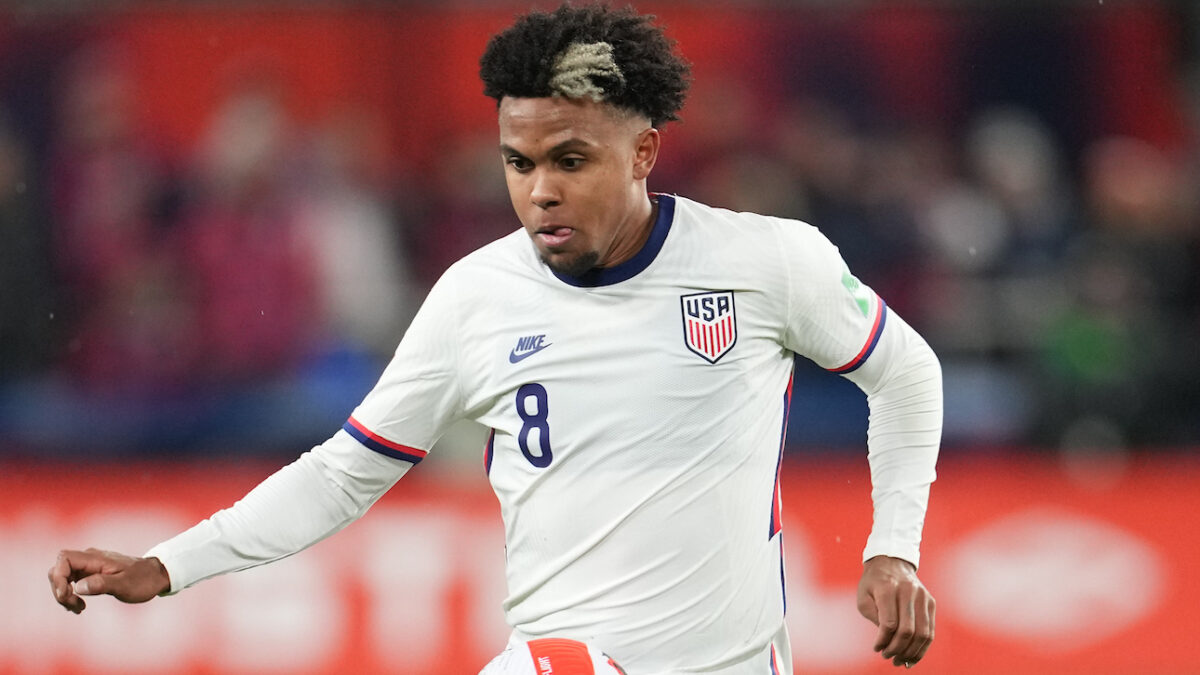 Weston McKennie, Lindsey Horan, and Yunus Musah are among 16 finalists that have been nominated for three different U.S. Soccer awards on Sunday.

Joining McKennie on the list for the Male Player of the Year are Christian Pulisic, Brenden Aaronson, Kellyn Acosta, Matt Turner, and Miles Robinson. All six players have put in strong domestic campaigns for their respective clubs in the calendar year and have all seen ample time with the USMNT over the last year.

McKennie made seven USMNT appearances in 2021, scoring two goals and helping the Americans capture both the Concacaf Gold Cup and Nations League trophies. The midfielder continued to fight for minutes at Serie A side Juventus, featuring in both Serie A and the UEFA Champions League.

The 23-year-old Pulisic scored three goals in eight appearances for the USMNT this year, with one of those coming in World Cup Qualifying this fall. Pulisic also lifted the Champions League trophy with Chelsea, helping the Blues edge EPL rivals Manchester City 1-0 in the tournament final.

Robinson’s stock with the USMNT has grown immensely over the last year, starting all six of the matches at the Gold Cup and six of the eight qualifiers. The Atlanta United defender was also sensational in MLS play, earning Best XI honors after helping the Five Stripes return to the playoffs.

Aaronson has grown into a regular contributor for the USMNT, scoring four goals and registering three assists this year. The attacking midfielder helped Red Bull Salzburg capture the Austrian Bundesliga and the Austrian Cup earlier this year and has featured in the Champions League throughout the group stage.

Acosta has been a busy player on both the club and international level this season, totaling 41 combined appearances this calendar year. The midfielder earned 20 caps with the USMNT, appearing in seven of the eight qualifiers so far. In MLS play, Acosta played a leading role for the Rapids, helping Robin Fraser’s claim the No. 1 seed in the Western Conference.

Turner’s stellar 2021 year saw the New England Revolution goalkeeper win the Supporters’ Shield, MLS Goalkeeper of the Year award, and finish as a Best XI selection. The New Jersey native has also thrust himself back into the conversation for the No. 1 job with the USMNT, earning 12 caps and being Gregg Berhalter’s go-to goalkeeper during the Gold Cup and the first five qualifying matches.

Mewis headlines finalists for Female Player of the Year

Five U.S. women’s national team players are up for the annual Female Player of the Year award with Carli Lloyd and Lindsey Horan among the finalists. Megan Rapinoe, Rose Lavelle, and Alyssa Naeher rounded out the finalists for the award.

Lloyd capped off a historic USWNT career by scoring 11 goals and registering six assists during the calendar year. She tied a team record by scoring five goals in a lopsided friendly victory over Paraguay in September.

Horan played the most minutes for the USWNT this year and reached her No. 100th cap during the Summer Olympics in Tokyo, Japan. The midfielder has since taken over Lloyd’s No. 10 jersey following her retirement.

Lavelle played in all six games for the USWNT at the Olympics and set career-highs with five goals and 22 matches in 2021. The midfielder has accounted for four of the team’s 18 game-winning goals since the team resumed play in November 2020.

Rapinoe contributed 10 goals and three assists during the calendar year, registering two of her goals during the Olympics. She heads into 2022 as a veteran piece of Vlatko Andonovski’s roster with a new World Cup Qualifying cycle set to begin.

Naeher was also a standout performer in Japan, which was highlighted by saving one penalty kick in regulation and two in the shootout against the Netherlands in the Olympic quarterfinal round. She was also nominated for FIFA Best Women’s Goalkeeper of the Year and also set a USWNT record with a streak of 10-straight shutouts before suffering a knee injury in the semifinals.

It will be a first-time winner for the U.S. Young Male Player of the Year award with three finalists coming from MLS and two from Europe.

Yunus Musah, Gianluca Busio, Ricardo Pepi, George Bello, and Jesus Ferreira have all been nominated for the yearly award.

Busio earned himself a move to Italian side Venezia this summer and has made 15 appearances for the club in league play. The former Sporting Kansas City homegrown midfielder has also earned all eight of his international caps with the USMNT during this calendar year, with six of them coming in the Gold Cup.

Musah registered two assists in eight appearances with the USMNT this year, featuring in all five of the team’s last five qualifying matches. In Spain, Musah has appeared in 12 league matches for Valencia during the current season.

Pepi was one of the bright young talents in MLS this season, scoring 13 goals and adding three assists for FC Dallas. The forward also broke onto the scene with the USMNT, scoring three goals in six caps and featuring regularly during qualifying.

Ferreira and Bello both shined with their club teams in 2021 and were included in several USMNT matches throughout the year. Ferreira totaled eight goals and nine assists with FC Dallas this season, connecting with Pepi as one of the top, young attacking pairings in MLS.

Bello set new career-highs in appearances, minutes played, and assists for Atlanta United, finishing with one goal and three assists in just over 2,500 minutes played for the Five Stripes. The 19-year-old has also garnered interest from Europe, should he decide to take that route in the near future.

Votes for U.S. Soccer Player of the Year awards are collected from respective National Team coaches, National Team players who have earned a cap in 2021, members of the U.S. Soccer Board of Directors, U.S. Soccer Athletes’ Council, National Women’s Soccer League head coaches for the USWNT and American soccer league (MLS and USL) head coaches for the USMNT, select media members and former players and administrators. In addition, select college coaches vote for the USWNT award.