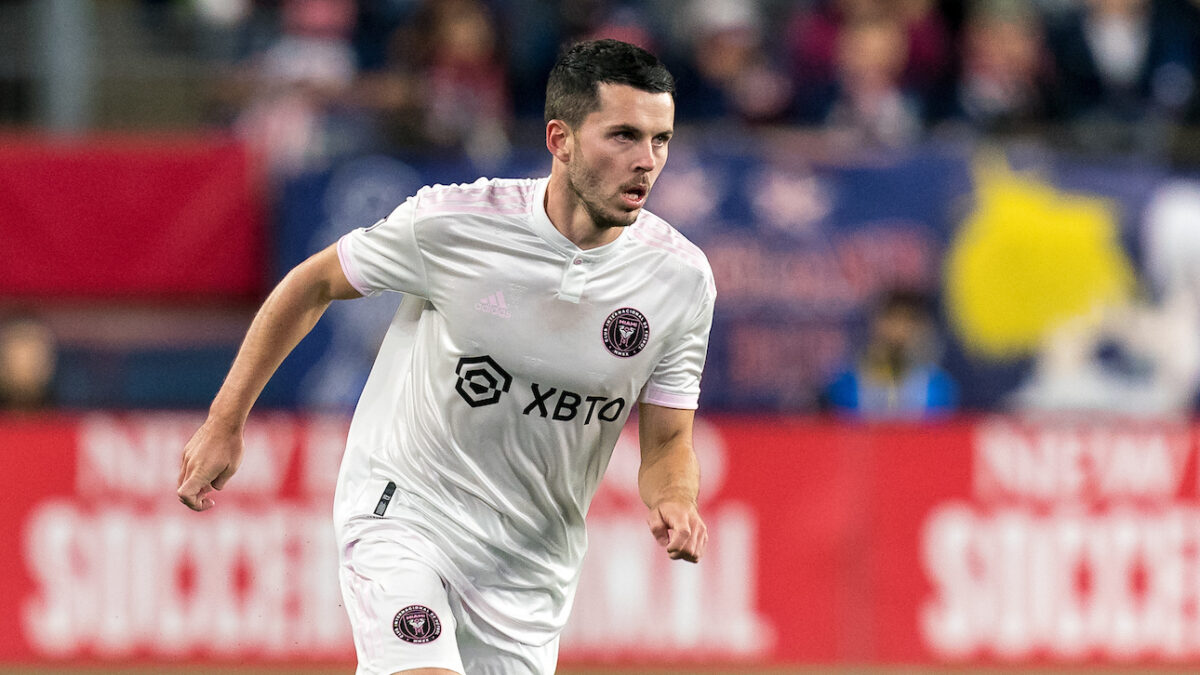 Morgan’s transfer from Inter Miami became official on Sunday, which sees the Eastern Conference club receive $1.2 million in General Allocation Money for his services. The 25-year-old previously played in Scotland with Glasgow giants Celtic before moving to MLS.

Morgan registered seven goals and 12 assists in two years with Inter Miami and can play as a winger or wing back in Gerhard Struber’s system. His arrival in Harrison, New Jersey will be a welcomed sight with the Red Bulls set to lose playmaker Caden Clark following his transfer to Bundesliga club RB Leipzig.

The Red Bulls made the 2021 MLS Cup Playoffs, but were eliminated in the first round by rivals Philadelphia Union.

LAFC has added defender Franco Escobar in a trade with Atlanta United, giving the club a promising right back option going forward. The Five Stripes will receive up to $600,000 in GAM in the deal, with $250,000 coming their way in the 2022 season.

Escobar joined Atlanta United in 2018 and scored two goals in the playoffs as the Five Stripes lifted MLS Cup on home soil. He went on to make 81 appearances in all competitions for Atlanta United, featuring in the Concacaf Champions League, U.S. Open Cup, and more.

LAFC missed out on postseason play in 2021 and will also be on the hunt for a new head coach.

Veteran forward Teal Bunbury is joining Nashville SC after eight years with the New England Revolution. Bunbury joins the Western Conference club in exchange for up to $150,000 in GAM.

Bunbury, the Revs’ fourth-leading scorer in club history, made 231 appearances for the club since 2014. He finished his career in Foxborough with 45 regular season goals and 21 assists.

Charlotte FC have acquired two players in trades, adding fullback Jaylin Lindsey from Sporting Kansas City and goalkeeper Pablo Sisniega from LAFC. Sporting KC traded Lindsey to Charlotte for up to $225,000 in GAM. Sporting KC will receive a 15% sell-on fee for future transfers.

LAFC will receive $50,000 in the trade for Sisniega, with another $50,000 coming in the deal if Sinsiega reaches on-field incentives.

Lindsey, 21, started to break into Sporting KC’s first team in 2021, making nine starts and 14 appearances. He scored his debut MLS goal in 2021, but a hamstring injury kept him out of play for the second half of the season.

The 26-year-old Sisniega is a Spanish goalkeeper who joined LAFC from Real Sociedad in 2019. Sinsiega made 28 MLS appearances with LAFC, logging 2,520 minutes and five clean sheets.

Inter Miami FC has added a versatile midfielder in Jean Mota from Brazil’s Santos FC on a two-year contract. Mota, 28, is a central midfielder who can also play left back and attacking midfielder.

Mota has played in Brazil his entire career. He made 2017 appearances with Santos since 2016, with 10 goals and 20 assists. He will bring needed experience to the club, who suffered a disappointing campaign in 2021 under Phil Neville.

Nashville SC have added forward Ethan Zubak in a trade from the Los Angeles Galaxy. The Galaxy received a first-round pick in the 2022 MLS draft in the deal.

Zubak scored one goal and had one assist in 18 appearances in 2021 for the Galaxy. The 23-year-old came up through the Galaxy’s youth system and made his MLS debut in 2018. It was the second offensive acquisition by Nashville SC on Sunday.

Longtime Los Angeles Galaxy centerback Daniel Steres will join the Houston Dynamo in a trade. Steres has been dealt to the Dynamo in exchange for a 2022 third-round draft pick.

Inter Miami re-signed midfielder Victor Ulloa to a new two-year deal which will run through 2022 and 2023. Ulloa has appeared in 45 matches for Inter Miami since being acquired in 2020, registering five assists.