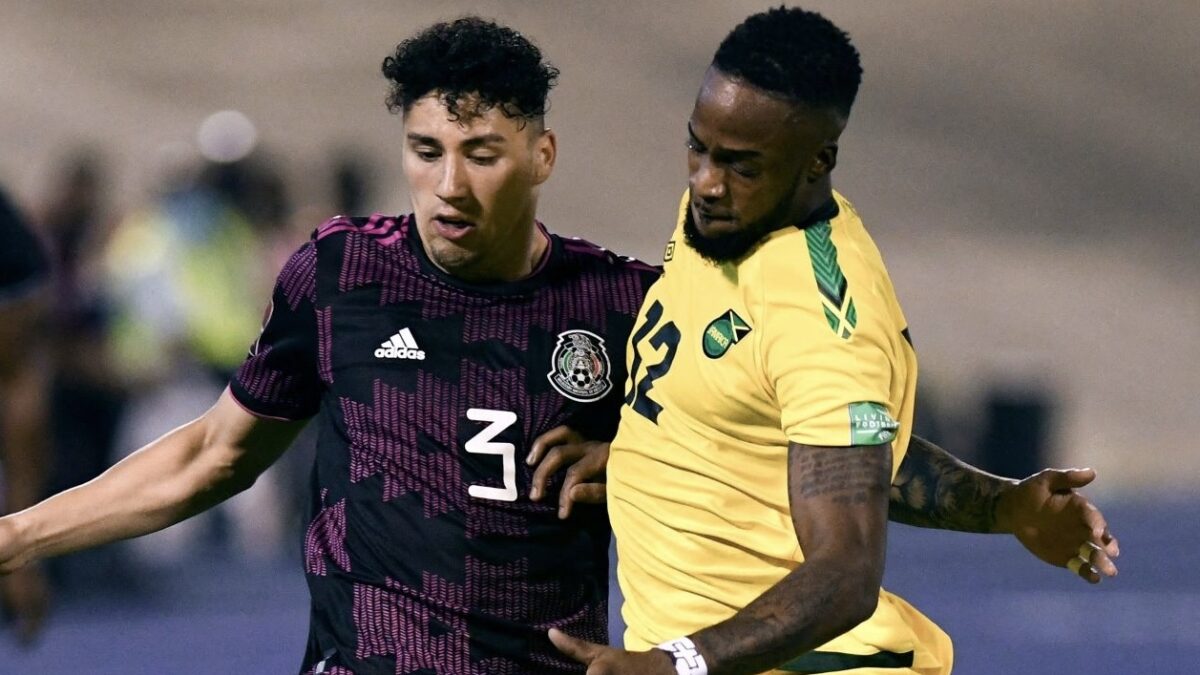 Mexico was staring a third straight qualifying defeat in the face on Thursday night, but a pair of late goals helped Tata Martino’s side escape Kingston with a bounce-back victory and an important three points on the road.

El Tri used late goals from Henry Martin and Alexis Vega to complete a 2-1 comeback win over Jamaica, staying in the top three of the octagonal round standings. A first-half red card to Reggae Boyz defender Damion Lowe reduced the hosts to 10-men for the remainder of the match, and eventually hurt Jamaica’s chances of an upset on home soil.

Lowe was sent off after a heavy follow-through on Andres Guardado and VAR ruled in favor of the ejection.

Daniel Johnson gave Jamaica a shock 1-0 lead in the 50th minute, striking home a right-footed shot into the bottom-right corner. Mexico failed to clear its line off a Jamaica corner kick and Johnson’s second international goal boosted the hosts in front.

El Tri upped their pressure after going down in the second half and eventually found their equalizing goal in the 81st minute. Vega’s header off a corner kick was saved by Andre Blake, but substitute Martin was in the right spot to pounce on the rebound and score.

Mexico would snatch all three points for the first time since October, as Vega arrived at the back post to slam home a sliding pass from Carlos Rodriguez. It was Vega’s second qualifying goal against Jamaica during the octagonal round and a massive one for El Tri’s confidence.

Despite a four-save performance from Blake, Jamaica missed the opportunity to move up in the standings. Mexico stays in third place, one point behind rivals United States.

Canada remained unbeaten in the octagonal round, using goals in each half in San Pedro Sula to defeat Honduras, 2-0.

John Herdman’s side struck early in the match, using a bit of trickery from winger Tajon Buchanan to break the deadlock. Buchanan danced his way into the box from the right wing and fizzed in a cross that deflected into the goal off of Denil Maldonado.

Honduras improved after halftime with Anthony Lozano and Kervin Arreaga having the best chances on goal, but Milan Borjan kept his clean sheet intact. Canada delivered the final nail in the coffin off a counterattack in the 73rd minute, with Jonathan David continuing his strong qualifying campaign.

Liam Fraser’s upfield pass hit David in stride and the Lille forward chipped Luis Lopez from 25 yards out, sealing a fifth qualifying win this cycle for the Canadians.

Canada stays top of the table on 19 points while Honduras remains as the only winless team in Concacaf.

Costa Rica made it back-to-back qualifying wins on Thursday night, using a second half winner from substitute Bryan Ruiz to earn a 1-0 home victory over Panama.

The chances were scarce in San Jose, but the hosts snatched the only goal of the match in the 65th minute. Ruiz slammed home a rebound attempt after Luis Mejia saved Jose Ortiz’s original effort in the box.

It was Ruiz’s second goal in the octagonal round and first since October 10.

Panama came close to tying things up at the death, but Abdiel Ayarza’s last-gasp shot in the box struck the left post and went wide.

Keylor Navas celebrated his 100th cap for the Ticos with a two-save shutout and Costa Rica moved two points behind the Panamanians for fourth place.