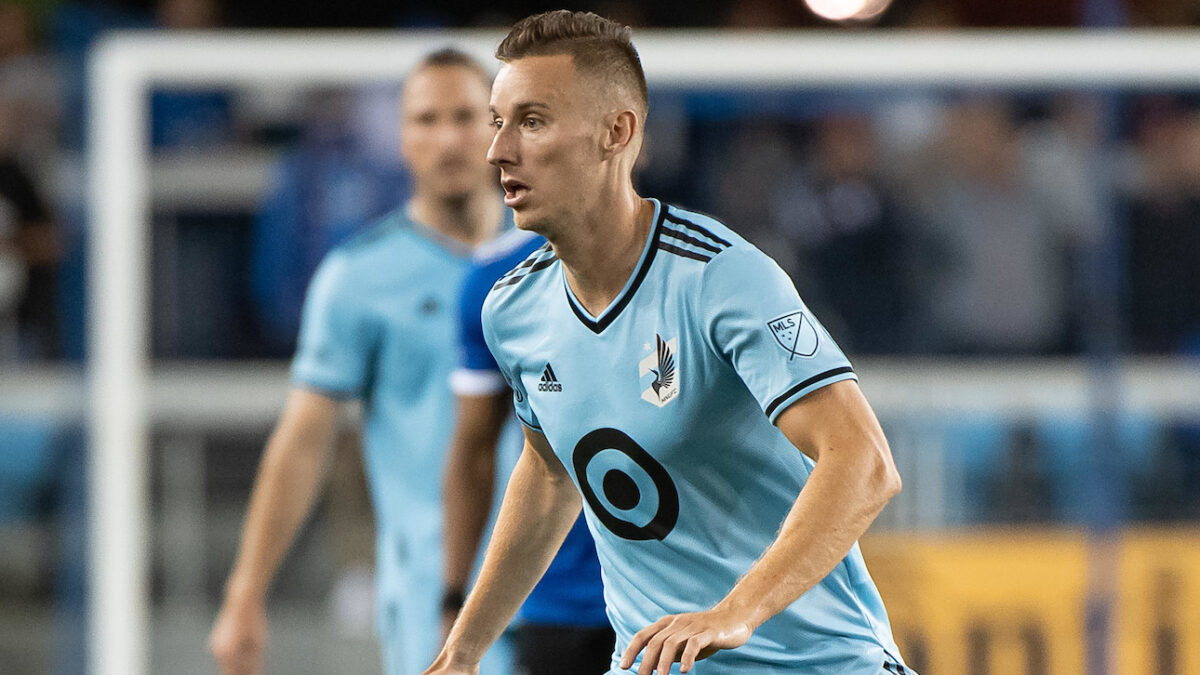 The San Jose Earthquakes added a top playmaking option to the mix with hopes of returning to the MLS Cup Playoffs in 2022.

Jan Gregus signed with the Western Conference club on Thursday, after San Jose selected him in December’s Stage Two of the MLS Re-Entry Draft. Gregus signed a one-year contract with the club, which includes an option for 2023.

Gregus, 30, played for Minnesota United as a Designated Player for the past three seasons, totaling 63 regular season appearances, two goals and 18 assists. In 2019, Gregus tallied 11 assists, which was tied for 11th most in the league.

Prior to MLS, Gregus played for teams in Denmark, the Czech Republic, England and Slovakia. He has also scored four goals in 36 caps for the Slovakia national team since his international debut in 2015.

The Earthquakes failed to make the playoffs in 2021, but retained head coach Matias Almeyda for this season.

Here’s a closer look at all of Thursday’s MLS news:

Yeboah signed with the Crew from Polish first division club Wisla Krakow and will occupy an international roster spot. The 24-year-old signed a three-year contract with the Eastern Conference club, which also includes an option for the 2025 MLS season.

Yeboah joined Wisla Krakow in August 2020 and appeared in 50 matches across all competitions with the club, scoring 10 goals and providing five assists over the past two seasons. In August 2021, Yeboah was named the Ekstraklasa Player of the Month, given to the league’s top player.

A graduate of Ghana’s famed Right to Dream Academy, Yeboah signed with Manchester City in 2014 at 17-years-old. He spent four seasons on loan from the Premier League giants, featuring for French club Lille, Eredivisie side FC Twente, and Spanish second-tier side Real Oviedo. He also played for CD Numancia and Celta Vigo in Spain prior to embarking to Poland.

Yeboah has earned four caps with the Ghanaian national team and will join up with Lucas Zelarayan, Pedro Santos, and Gyasi Zardes in Caleb Porter’s attack this season.

Leerdam officially signed with the Western Conference club on Thursday, inking a two-year contract which includes a club option for 2024. He will not occupy an international roster spot after holding a U.S. Green Card.

The 31-year-old Leerdam joins the Galaxy having tallied nine goals and 13 assists in 120 MLS regular season appearances over the past five seasons. Leerdam, a Suriname international, lifted MLS Cup in 2019 with the Seattle Sounders and also won three Western Conference Championships.

Last season, Leerdam registered one assist in 29 regular season appearances for Inter Miami during the 2021 campaign. Prior to his time in MLS, Leerdam spent the first nine seasons of his career in the Netherlands playing for Feyenoord and SBV Vitesse.

Hegardt’s contract also comes with option years for 2024 and 2025. Charlotte FC acquired Hegardt’s MLS rights from the Seattle Sounders in exchange for $50,000 in General Allocation Money (GAM). Seattle could also receive an additional $50,000 in GAM if certain performance-based incentives are met.

Hegardt played in 31 games for Georgetown across two seasons where he scored three goals and added six assists. The Hoyas won the 2021 BIG EAST Conference Tournament and earned the No. 3 overall seed in the 2021 NCAA Tournament before being eliminated in the Final Four.

Prior to his collegiate career, the San Diego native was part of the Seattle Sounders’ academy where he won the 2019 Generation adidas Cup. Hegardt made his professional debut with the Sounders USL affiliate, Tacoma Defiance, in 2019 and went on to play 17 games overall for the USL club.

FC Cincinnati made its second defensive addition this week, signing John Nelson to a one-year contract for the 2022 season,

Nelson was selected by FC Cincy in Stage Two of the 2021 MLS Re-Entry Draft. His contract with the Eastern Conference club also includes an option for 2023.

Nelson, a Generation adidas player, spent the past three seasons with FC Dallas. The 23-year-old has totaled 30 MLS appearances since the 2019 season and started in two MLS Cup Playoff matches for the Texas-based club in 2020.

Nelson is a former No. 10 overall pick by FC Dallas in the 2019 MLS SuperDraft after excelling at the collegiate level with the University of North Carolina.

The Colorado Rapids acquired a promising young talent on Thursday, adding to several key pieces in their squad already.

Max Alves da Silva joined the club from Brazilian club Flamengo on Thursday, signing a four-year deal with the Rapids. Da Silva will occupy a U-22 player spot on the Rapids roster, while his contract also includes a club option for 2026.

The 20-year-old made 10 appeareances for Flamengo in Brazil’s Serie A, including a pair of appearances in two different cup competitions. Da Silva also made 15 appearances on loan for fellow Brazilain side Cuiaba, scoring one goal for the recently promoted club.

Da Silva will look to team up with Cole Bassett, Kellyn Acosta, and several others in the Rapids midfield this season.