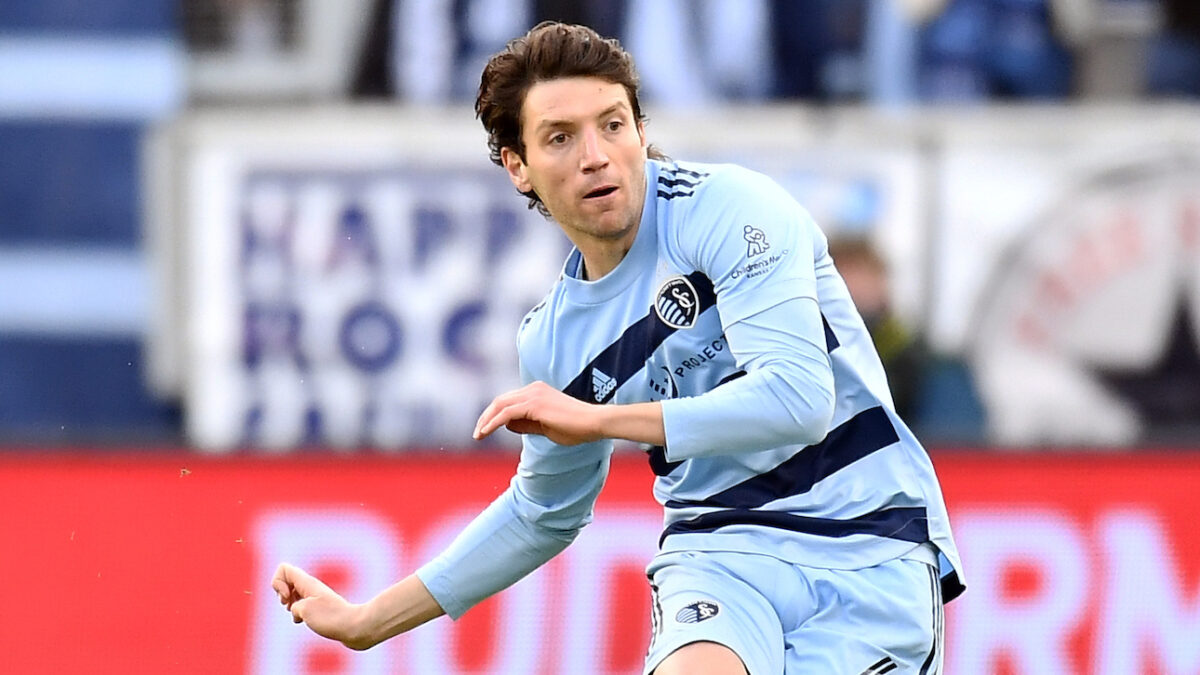 LAFC added veteran leadership to its midfield on Wednesday with hopes of rebounding from a disappointing 2021 campaign.

“Ilie is a player I have long admired not only for his ability on the field but also for his character and professionalism, which make him a great fit for us,” LAFC Co-President & General Manager John Thorrington said. “We trust these qualities will help LAFC in our commitment to winning on and off the field for years to come.”

Overall, Sanchez made 171 appearances with SKC, scoring 11 goals and registering 13 assists across all competitions. The Spaniard previously spent eight years in Germany and Spain, featuring for Barcelona B, 1860 Munich, and Elche.

LAFC failed to make the MLS Cup Playoffs in 2021 and now enters a new era with Steve Cherundolo as head coach.

The 30-year-old Caldwell signed a two-year contract with RSL, making the switch from the New England Revolution after nine seasons in Foxborough. Caldwell, a former Homegrown signing by the Revs, went on to feature in 229 regular season matches for New England.

“We have long admired Scott for his quality on the field and professional approach to the game,” RSL General Manager Elliot Fall said. When he became a free agent this year, he was a natural target for our club. He brings another excellent option to our midfield, as well as long-term experience in a proven, winning environment.”

Cadlwell registered five goals and 18 assists during his time with the Revs. He totaled 198 minutes for Bruce Arena’s side in 2021, helping New England win its first Supporters’ Shield crown.

Real Salt Lake advanced to the Western Conference Final in 2021 before losing to the Portland Timbers away from home.

USL side Sporting Kansas City II announced Wednesday that Feilhaber will take over as head coach heading into the 2022 season. Feilhaber joined SKC’s technical staff in January 2021 and previously served as the Under-17 head coach in the club’s academy.

Feilhaber, who won three major championships in his 15-year playing career, lifted the 2013 MLS Cup and 2015 and 2017 U.S. Open Cups with Sporting KC. He also earned 44 caps for the USMNT during his storied playing career, appearing at the 2010 FIFA World Cup and winning the 2007 Concacaf Gold Cup.

A native of Brazil, Feilhaber holds a U.S. Soccer B License and is currently working towards his A-Senior License.

The 16-year-old made his professional debut with Real Monarchs in June 2021 and went on to appear in a total of two matches in the USL regular season. Beavers is the third goalkeeper to sign with Real Salt Lake who worked under Goalkeeper Coach Mirza Harambasic.

“I’m very grateful and appreciative for this opportunity with RSL,” Beavers said. “Excited to get into preseason, to work hard, continue to learn and improve my game everyday, just do everything I can to help my team and teammates be successful.”