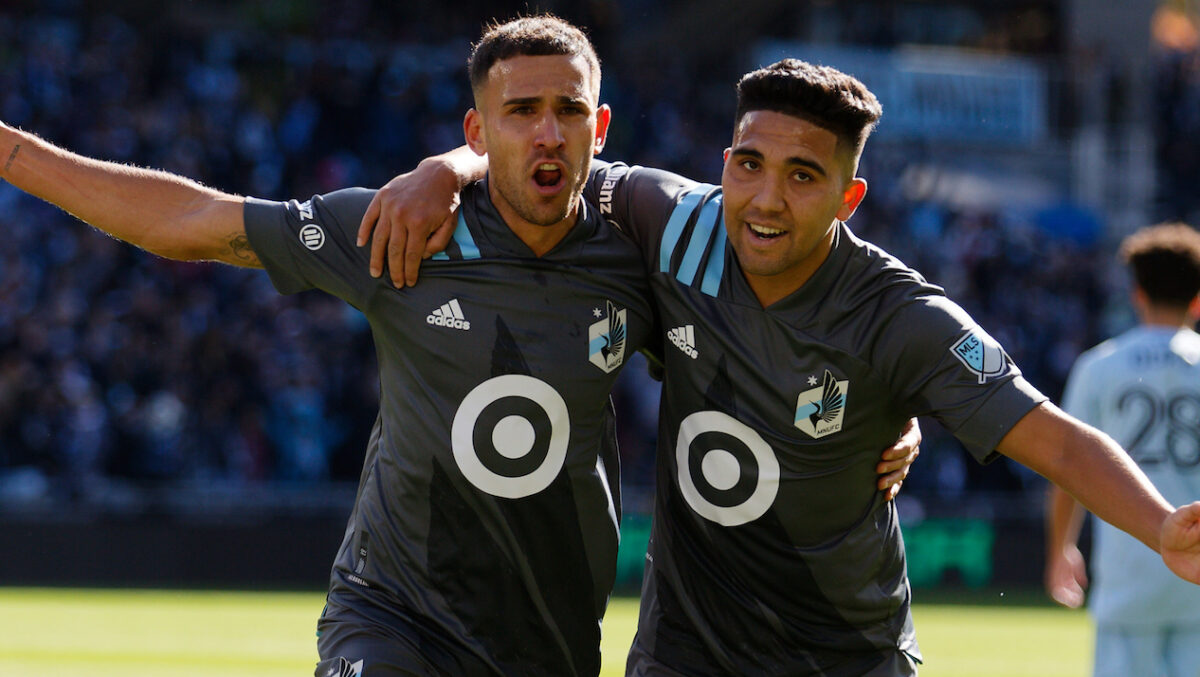 Minnesota United has continued to knock on the door in the Western Conference over the past few seasons, but will be under pressure to truly compete for a first trophy in club history in 2022.

The Loons head into their sixth season under head coach Adrian Heath and although the club fought to make the MLS Cup Playoffs in 2021, they were left frustrated after an early exit at the hands of the Portland Timbers. Now with several exciting attacking players paired with a stingy defensive unit, Minnesota United will hope for increased success this season.

“We didn’t like how the season ended because we fought to get to the playoffs and we felt it ended way too early for how much the guys put into it,” Heath told SBI. “The good thing is though we’ve had a really good preseason camp and we are excited to get this group back together and back competing again. A lot of our key pieces are back and we also added in some good players who I think will continue to make us a very dangerous team.

“We showed last season we can get results against a lot of good teams in this season and I think our guys took another step forward together,” Heath added. “We have a good foundation defensively and we have some really exciting pieces offensively so I think it’s going to be a great season for us.”

There will be no shortage of attacking talent in the Loons squad this season with several exciting players headlining the group. Robin Lod led the Loons with nine goals last season and will look to form a strong partnership with playmakers Emanuel Reynoso and Franco Fragapane, who combined for 10 goals and 19 assists in 2021.

The striker role will be one to watch, with a crowded field of candidates in the mix. Adrien Hunou showed positive moments in his first MLS season and will look to take another step forward this year. Luis Amarilla will also return to the club from his loan spell in Ecuador and hope to have a more impactful role than his first spell with the club. Young South African Bongokuhle Hlongwane is another new face to keep an eye on.

“Emanuel [Reynoso] had a frustrating offseason, but he’s come into camp and looked really well,” Heath said. “I got to play and coach a lot of great players, and this guy is up there with them for his abilities on the field. He is so clever and talented with the ball and I think last season you saw another glimpse of what he can do. We believe he can be in the MVP conversation this season because he is that good and we expect even more out of him in 2022.”

In central midfield, the loss of Jan Gregus and Osvaldo alonso should open up the door for Hassani Dotson to take a bigger role, though the arrival of Honduran midfielder Kervin Arriaga will give Heath more options. Young midfielder Joseph Rosales could also see time in the squad after playing in several roles for the club in preseason.

“I think Kervin is an exciting signing because he is an Honduran international who has a lot of games under his belt for his age,” Heath said. “He will bring something new to the team and we are excited to get him in the midfield mix with Hassani and Wil. We had been looking at him for some time now and we’re happy to get the deal done.

“Joseph Rosales is a player who has really impressed this preseason because no matter where you put him, he doesn’t look out of place,” Heath said. “He’s played left back, midfield, and winger, so no matter where we use him, he is up for the challenge, and that is what you like to see from a young player.”

Defensively, Minnesota was one of the best in the league in 2021, conceding only 44 goals in 34 matches, which was the fourth-fewest in the Western Conference. Centerbacks Michael Boxall and Bakaye Dibassy are the frontrunners to start again in central defense, with Brent Kallman providing depth.

At fullback, Chase Gasper remains the starter at left back while Romain Metanire remains a regular on the right side. Both Gasper and Metanire are strong defenders and aren’t afraid to get upfield to provide distribution to their attacking teammates. D.J. Taylor and free agent signing Oniel Fisher will provide depth at the fullback position following Jukka Raitala’s release this offseason.

“Our defensive unit has been among the best in the league over the past few seasons so it will be one of our strengths again,” Heath said. “[Michael] Boxall and [Bakaye] Dibassy have gelled really nicely together and [Brent] Kallman is back and brings veteran experience. Our full backs have also continued to grow in how we want to play and will be a big part of things. Romain Metanire is an international player and Chase Gasper has flirted with international appearances in the past.

“Even with our goalies, the competitiveness is there,” Heath said. “Tyler Miller is fighting for the No. 1 job and Dayne St. Clair is giving him a run for it. The competition is all around the squad and I think that will only help us because even if injuries happen this season, we will have guys who should be ready to fill in.”

Tyler Miller remains the No. 1 goalkeeper for the Loons, but will be pushed by Canadian international Dayne St. Clair for the starting job. St. Clair excelled in 2020 while Miller was sidelined with a back injury.

Miller returned in goal in 2021 and delivered 11 shutouts in 30 regular season appearances, getting back to his best moments as a veteran. Both goalkeepers will give the Loons a strong chance to be successful this season as the club fights for an improved regular season finish.

Here is a closer look at 2022 Minnesota United:

Ozzie Alonso’s departure left a hole in the heart of the Loons midfield, but Honduran international Kervin Arriaga should help fill it with a new sense of competitiveness. Arriaga has totaled over 100 club appearances in his native Honduras and has also played heavily during World Cup Qualifying. The tall midfielder will bring a youthful energy to the squad and be another option for Heath to call on alongside Hassani Dotson or Wil Trapp.

Pressure is On: Abu Danladi

Abu Danladi is back with Minnesota United, but will need to be impactful to earn a consistent role in the squad. The former No. 1 overall pick by the Loons excelled in his rookie season with eight goals, but has only totaled six goals in the last four seasons combined. With several attacking pieces returning to the squad from 2021, Danladi will need to make the most of his chances to be a key part of the roster.

“Abu is a guy we are very familiar with and are excited to bring back,” Heath said. “He had an injury last season, but he’s come into camp looking very strong so we’re hoping he can bring something to the attack. He’s a nice option to have with the other attacking players.”

After reaching the MLS Cup Playoffs for the fourth-consecutive season in 2021, the Loons have high aspirations to bring home a first title in 2022.

Heath has more depth in his squad than he has ever had during his time in Minnesota, which should bring plenty of excitement for players and fans alike. The Loons might not return a double-digit goalscorer, but they have several different players who can be a match-winner on any given night.

“All of our attackers missed chunks of the season in 2021, but when they played together our record was pretty phenomenal heading into the playoffs,” Heath said. “When we’ve had our best players on the field, we’ve gotten good results. It’s very exciting to think about the group when you look at it on paper, but now we’ve got to go out and deliver on the field.

“I think we have a lot of dangerous players when you look at everyone who can score goals for us,” Heath added. “As a coach, it’s a good situation to have because yes you want to have all of your best attackers on the field, but sometimes players will have to wait for their opportunities. If you add in the new faces this offseason, I think we can contend with anyone in the conference again.”

Dotson and Gasper are two of the key young players in the squad, who have continued to make the most of their chances. Both players have locked down roles in the starting lineup and will be eager to take another step in their overall developments. The duo have continued to excel alongside one another after being drafted in 2019.

“We are very happy with Hassani and Chase because they have continued to become good professional players,” Heath said. “If you add in Dayne St. Clair, who was also drafted in the same year as those two, you’re looking at a really good group of players. Chase has locked down the left back position and continues to work at his all-around game and Hassani is a growing leader in the group. I can’t say enough good things about them and there at the ages now that you say ‘okay now’s the time to go ahead and show what you can do.”

The Loons will be one of the hardest teams to break down in 2022 after delivering another strong defensive record last season. Boxall and Dibassy will continue their partnership in the heart of Minnesota’s 4-2-3-1 formation while Gasper and Metanire race up and down the wings on both sides of the field.

Minnesota United has all of the talent to compete for trophies this year, but it will come down to playing consistent soccer when it matters the most.

“We know what the Western Conference is going to be about,” Heath said. “We know the Galaxy have re-tooled, LAFC re-tooled, and Nashville is a strong team that is coming into our conference. We know what Portland and Seattle bring to the table every season. So for us, it’s about going out there and playing our brand of soccer every week. We know every week is going to be a dogfight and we’re at a situation now where we need to be talking about trophies because we have a deep squad and experience in the playoffs.”