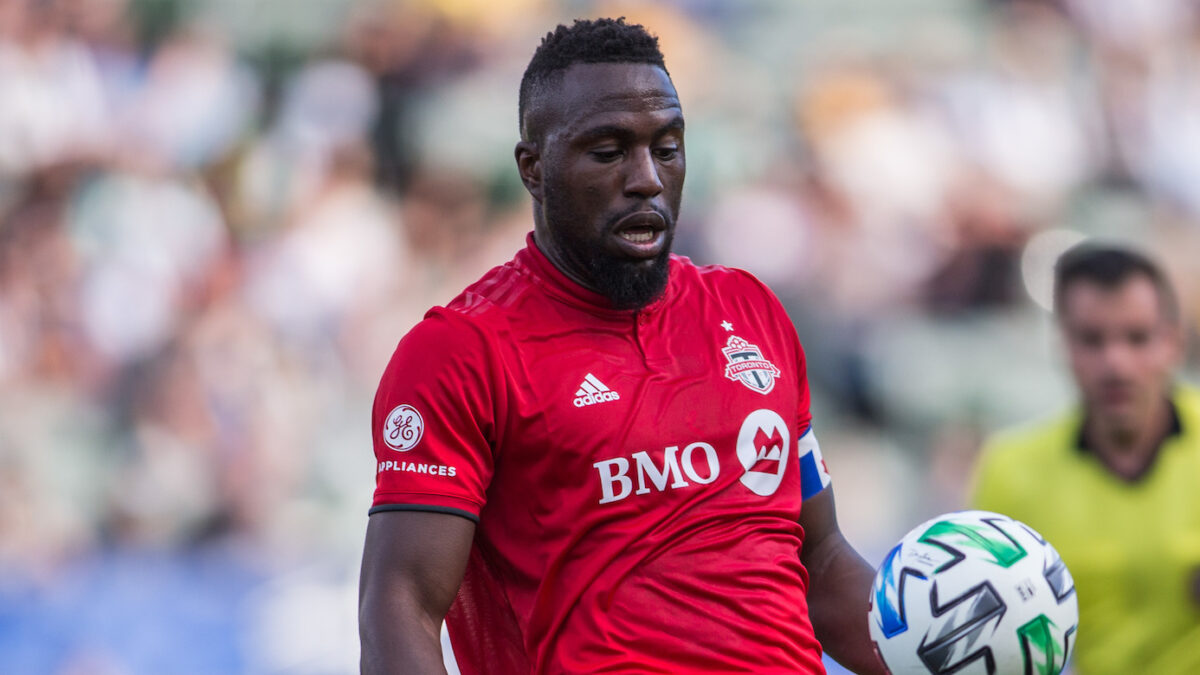 Jozy Altidore has bid farwell to Toronto FC and is moving closer to joining the defending Supporters’ Shield winners.

New England Revolution head coach Bruce Arena confirmed the reported interest that Altidore would be joining the club ahead of the 2022 MLS season. Altidore also took to social media on Friday to thank the Toronto FC and its supporters for his seven seasons with the club as a Designated Player.

“It sure sounds that way, doesn’t it,” Arena said in a conference call with reporters. “I think that’s going to happen. We’re happy to get Jozy. He’s going to need a little bit of time to get ready… He’ll be a great addition to our roster.”

The 32-year-old would be a welcomed presence in the Revs squad following the departures of both Tajon Buchanan and Teal Bunbury this offseason. Adam Buksa, Gustavo Bou, and Carles Gil all remain in the Revs attack though, which could force Altidore as a bench option to start for the Revs this season.

Altidore has totaled 86 goals and 29 assists across 193 combined league appearances to date. He lifted one MLS Cup, one Supporters’ Shield trophy, and three Canadian Championships during his time in Toronto.

The Revs kick off their competitive schedule on Tuesday against Haitian side Cavaly AS in the Concacaf Champions League Round of 16.

Here is a closer look at all of Friday’s MLS news:

The Portland Timbers retained a key playmaker in their midfield heading into the 2022 MLS season.

Sebastian Blanco was re-signed on Friday, inking a new two-year contract through 2023. The 33-year-old’s return is a major boost to Giovanni Savarese’s squad, which saw longtime legend Diego Valeri depart the club this offseason.

“I’m coming home, Portland,” Blanco said. “This has been my home for the past five years, and my family and I are extremely excited to be back. I’m hungry to win, and there’s nowhere I’d rather be than this club with my teammates. I believe in my team and the leadership of this club, and I can’t wait to achieve great things together.”

Blanco is set to begin his sixth season with the Timbers and remains one of the top dual-threats in MLS. The Argentine has made 127 regular season appearances for the Timbers, scoring 33 goals and tallying 42 assists since joining the club in 2017.

He led the Timbers to the MLS is Back Championship in 2020, winning the competition’s MVP award. Blanco has helped the Timbers win Western Conference titles in 2018 and 2021, but remains searching for a first MLS Cup title.

The San Jose Earthquakes locked up forward Cade Cowell to a new contract on Friday, signing him through the 2025 season and to a U-22 initiative slot.

Cowell’s contract also includes a club option for 2026, inking the Homegrown player for the next four seasons. The 18-year-old signed a HG contract ahead of the 2019 season and since has made 50 league appearacnes, scored six goals, and registered seven assists.

“Seeing Cade grow from a promising youth player and having it translate to production at the MLS level has been exciting to watch,” said Earthquakes General Manager Chris Leitch. “Not only did he take on a bigger role as a 17-year-old in 2021, but he also earned a selection to the MLS All-Star team and got his first cap with the USMNT. We’re bullish on his future, excited for his contributions in 2022, and couldn’t be happier to sign him to a long-term contract and play an important role in his continued growth.”

He had a breakout season in 2021, scoring five goals and adding six assists to earn his first-ever selection to the MLS All-Star Team.

Cowell has represented the United States at several youth national team levels and made his senior debut in a 1-0 friendly win over Bosnia and Herzegovina in December 2021.

Another promising American talent is returning to the United States with hopes of sparking the next chapter of his career.

“CJ is a gifted young goalkeeper with really good feet,” Inter Miami chief soccer office and sporting director Chris Henderson said. “His distribution and reading of the game are very strong for a young keeper and we’re excited to bring him onboard and help further his development. He’ll come in and add competition to a strong goalkeeper unit.”

Dos Santos, a Pennsylvania native, spent three seasons in the Philadelphia Union academy before moving to Europe. He made two appearances for Benfica’s B team in 2021.

On the international level, Dos Santos has previously represented the U.S. Under-20 and Under-17 men’s national teams. He participated in a USMNT senior camp in December 2020 and was an unused substitute in a friendly against El Salvador.

Taylor joins from Norwegian top flight club Sportsklubben Brann, signing a two-year contract with a club option for 2024. The 27-year-old winger, who has also seen time in midfield in Norway, will occupy an international roster spot.

“Robert is a skillful, exciting, chance creator that gives us options in attack as he can excel in different roles as a winger and as a central midfielder,” said Inter Miami CF Chief Soccer Officer and Sporting Director Chris Henderson. “He also adds valuable international experience to the squad as he has featured regularly for the Finnish national team. We are confident his addition will add to our attack and help us succeed.”

The Finland native has played his entire career to date in Europe, featuring in Finland, England, Sweden, and Norway. Taylor has compiled 239 senior appearances at club level across all competitions, recording 55 goals and 31 assists.

He joins Gonzalo Higuain and Robbie Robinson in the Inter Miami attack.

FC Dallas signed its 2021 first round draft pick Tsiki Ntsabeleng on Friday, inking the forward to a one-year contract with club options for the 2023, 2024 and 2025 seasons,

Ntsabeleng, the 28th overall selection in the MLS Draft, will occupy an international roster spot on Dallas’ roster. The 24-year-old was selected by FC Dallas after the club acquired the No. 28 overall pick in a trade with New York City FC.

Prior to his move to Oregon State, Ntsabeleng played at Coastal Carolina University, helping the Chanticleers win the Sun Belt Conference in 2019. He played for the Stars of Africa Football Academy and UJ Club in South Africa before moving to the United States.