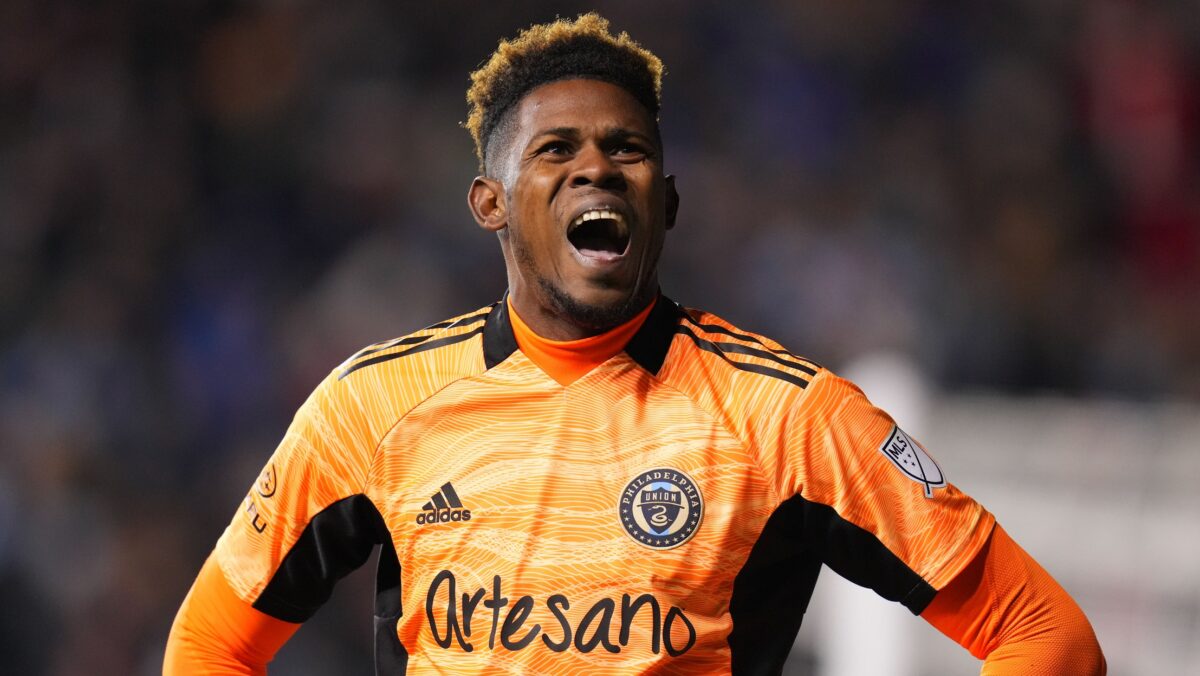 The Philadelphia Union have gradually taken steps forward as a franchise in the most recent years of Jim Curtin’s tenure as head coach, but with majority of their starters back and some fresh attacking faces coming to Chester, this might be the club’s best chance at winning MLS Cup yet.

The Union fell just short of playing in the 2021 MLS Cup, falling to eventual winners New York City FC in the Eastern Conference Final, albeit with a shorthanded roster. Now the goal for the Eastern Conference club will be to find similar levels of consistency throughout the regular season with new faces coming into the squad.

“I’ve said it before and I’ll say it again, we aren’t going to surprise anyone in this league so we have to be ready to give it our all to win MLS Cup,” Curtin told SBI. “We got a taste of the Eastern Conference Final for the first time in club history and we also gave a lot of young players valuable experience going forward.

“We have a lot of our key players back and some new faces coming in that we think will help the team reach our goal,” Curtin added. “The growth of the franchise as a whole has been great to see because we are continuously getting better and our goals remain very high in all competitions. The margins are very tight for us, we’re not a team that can just walk on the field and if 4-5 guys have a bad day, we still walk away with a win, that’s not going to happen.”

The main two arrivals for the Union this offseason was the acquisition of Danish international forward Mikael Uhre and Argentinian winger Julian Carranza. Uhre is the latest European player to embark to MLS and will be an exciting signing for the Union after delivering back-to-back sensational campaigns with Brondby in Denmark.

Carranza is hoping to spark his career in MLS after originally joining Inter Miami in 2020 for its expansion season. The 21-year-old forward has scored three goals in 42 career league appearances, and brings creativity and versatility to the Union attack with also features Sergio Santos and Cory Burke.

“Mikael is very familar with our system here and fits a two-striker system which is good,” Curtin said. “He was a leading scorer in a European league so it shows his quality on the field. He has played in the Europa League at the highest level so that also helps. He is a very special player that we recruited to come in and be the guy up top.”

“Carranza brings a different type of movement compared to the other forwards, maybe it’s the Argentine in him with his clever movements,” Curtin jokingly said. “He brings willingness and fight in the box and his defensive work so far this preseason has improved immensely. Sergio and Cory have been here before and both bring different, but good things to the mix so all-in-all, I think we have a really good group of guys here that will only get better when working together.”

While many MLS clubs continue to piece together defensive pairings, Curtin has all of his starters returning to Chester. Jakob Glesnes and Jack Elliott will be the starting centerback duo for the Union after both delivering strong individual seasons in 2021. Scottish international Stuart Findlay and Homegrown defender Brandan Craig round out the centerback options, giving Curtin a mix of youth and experience in the squad.

Left back Kai Wagner remains one of the top two-way full backs in MLS while right back Olivier Mbaizo took major steps forward in his career. The Union also have one of the top goalkeepers in Jamaican No. 1 Andre Blake, who registered 13 clean sheets last season and stole many matches on his own. Defensively, the Union will be tough to break down after conceding the third-fewest goals in the Eastern Conference in 2021.

“I think when you look at us, we are built strongly up the middle of our formation so a lot of credit goes to Jack [Elliott] and Jakob [Glesnes] for being our leaders in defense,” Curtin said. “They both work so well with each other and you see it on the field. When one of them steps forward to attack, the other defends. They are a big part of our success.

“You see a lot of MLS clubs that pay sometimes $10 or more million for attacking players so having a strong foundation defensively is key,” Curtin said. “Kai is another player who continues to be one of the best at his position and Olivier took great steps last season and will only improve with more time. We have a lot of good defensive depth so that always helps.”

Curtin will still have plenty of Homegrown help to call on in 2022 with several players gaining valuable reps last season. Paxten Aaronson, Quinn Sullivan, and Jack McGlynn will all fight for minutes after impressing in their roles in 2021, competing with Leon Flach to start in what is a heavily-contested midfield group.

Aaronson, McGlynn, and Sullivan all broke onto the scene last season and now have a new opportunity to continue growing as a group together. All three players have featured for the U.S. under-20 men’s national team in fall and winter camps, continuing what has been a rapid rise of international talent in the Union’s academy.

“You can see that they enjoy playing together,” Curtin said about his homegrown trio. “They bring out the best in one another and are always competing and pushing one another to get better every day. Jack [McGlynn] has an amazing left foot and is calm on the ball, Quinn Sullivan is relentless in his work with and without the ball, and Paxten can change games by himself with his abilities. It’s the latest group to excel with the first team and now it’s about keeping them at a high level consistently.”

A lot of responsibility could fall on the midfield corps headlined by Alejandro Bedoya, Leon Flach and Jose Martinez. Bedoya and Martinez are box-to-box players in Curtin’s set-up, tracking down a lot of ground and being leaders on the defensive side of the field. Flach impressed in his first MLS season and will be keen to deliver once again in Curtin’s 4-4-2 diamond.

Jamiro Monteiro’s departure to San Jose brings a bigger role to Hungarian midfielder Daniel Gazdag as he enters his second season with the Union. Gazdag started slow once he arrived in Chester, but picked it up down the stretch, showing off his scoring and assisting abilities in the final third. Gazdag, like the rest of the Union midfield, will aim to pester opponents not only with the ball on offense, but in their constantly defensive pressing.

“We’re going to continue to make things difficult for our opponents,” Curtin said. “You saw last season what happens when we force teams into turnovers and how frustrating that can be for them, especially on the road. It’s going to need to be a total effort from all 11 guys on the field if we want to play our way. We took another step last season and now it’s about bringing it all together for a better run and finish in 2022.”

Here is a closer look at the 2022 Philadelphia Union:

The Philadelphia Union have searched for a star striker over the past few seasons and Mikael Uhre could be exactly what the club needed. Uhre is familar with the Union set-up after playing a similar pressing style at Danish club Brondby and is coming off his best two seasons as a professional player. Uhre, 27, is tall and strong in the box, making him a threat not only with his feet, but also with his head.

Pressure is On: Sergio Santos

The arrivals of both Mikael Uhre and Julian Carranza will bring excitement to the Union attack, but will also put pressure on Sergio Santos. Santos always brings a lively presence to the field when called upon, but injuries have certainly hampered his time in Chester. The Brazilian will need to not only stay healthy, but deliver goals and assists to remain a regular member in Curtin’s offensive plans.

After falling just one match short of competing for MLS Cup, the Union will have high aspiriations to go all the way in 2022.

Jim Curtin still has plenty of his veteran leaders to call on this season including Bedoya, Blake, Glesnes, and Elliott. The continued development of Aaronson, McGlynn, Flach and Sullivan will be key as the Union aims to be one of the main contenders in a competitive Eastern Conference. Monteiro’s exit opens up an opportunity for all four of those players to fight for a consistent starting role in a deep midfield corps.

“Having Jamiro here was a great time and he played a key role in the squad during the years he played for us, but now it’s an opportunity for others to step up,” Curtin said. “I don’t think many people expected from an Auston Trusty, Mark McKenzie, Brenden Aaronson, Anthony Fontana, when they first got their chances, but those guys defied the odds in a way and bloomed in a different way in their careers and are now in Europe.

“We see the same for Paxten Aaronson, Jack McGlynn, Quinn Sullivan, and Nathan Harriel,” Curtin added. “There’s a good, young stable of talent that will have more of an opportunity due to the moves we made in the offseason. The only way young players get better is when they are on the field, and we have a lot of faith in these kids and with the things this club believes as a whole.”

Uhre and Carranza should give the Union needed help at the forward position, helping taking less of the pressure off of Santos and Burke. Uhre will be expected to deliver quickly after impressing in his final seasons in Denmark, but will bring plenty of excitement after taking over for Przybylko.

There isn’t a return to the Concacaf Champions League this season, but the Union will be among the contenders not only in the Eastern Conference, but also in the fight for MLS Cup. Curtin continues to bring out the best in a lot of the young players in the squad while veteran leadership remains at an all-time high.

Subaru Park has continued be a fortress for the Union heading into the 2022 campaign and will pose problems for any visiting team this season. The Union have everything it takes to lift trophies by season’s end, but it will come down to their overall consistency as a group and their new arrivals to deliver.