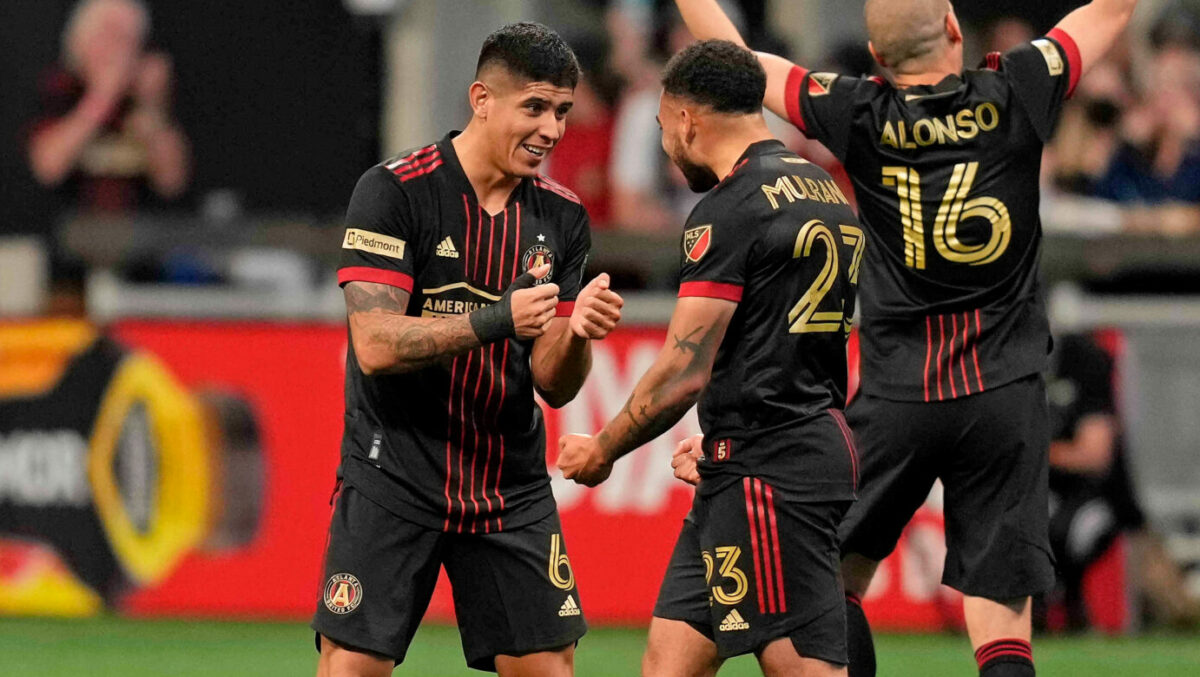 Atlanta United stole three points at the death at Mercedes-Benz Stadium on Sunday with Jake Mulraney playing the super-sub role for the Five Stripes.

Mulraney’s winning goal came in the 96th minute as Gonzalo Pineda’s side downed Charlotte FC 2-1 in the first-ever meeting between the two clubs. Josef Martinez’s penalty-kick opener was cancelled out by Adam Armour’s equalizer not long after for the visitors, but Mulraney played the hero as the Five Stripes rebounded to earn a second win of 2022.

Charlotte FC’s tough start to life in MLS continued with Miguel Angel Ramirez’s side losing a third-straight match to start the season.

The Seattle Sounders endured a disappointed start to the Major League Soccer season through the first two weeks, but on Saturday reminded us all why they are very much a title contender.

A Xavier Arreaga header settled matters at Lumen Field in a clash of Western Conference heavyweights, with the Sounders prevailing in a 3-2 victory to hand the Galaxy their first loss of the season.

Javier Hernandez opened the scoring for the Galaxy in the fifth minute, but Greg Vanney’s team didn’t experiencing the lead for very long, with Jordan Morris bundling home an equalizer just 11 minutes later.

The rivals traded another set of goals before Arreaga’s winner in the 72nd minute.

The New England Revolution rotated its lineup considerably ahead of midweek Concacaf Champions League action, but it still took a dramatic collapse for Pablo Mastroeni’s side to taste victory. Real Salt Lake rallied from a 2-0 deficit with three goals in the final 12 minutes to silence a Gillette Stadium crowd that had already endured snowy conditions and Bruce Arena’s roster rotation.

Austin FC and D.C. United were also knocked from the ranks of unbeaten, with the Portland Timbers edging Austin and the Chicago Fire topping D.C. United. Minnesota United claimed a 1-0 road win over the New York Red Bulls on Sunday with Dayne St. Clair stealing the show with eight saves in goal.

Man of the Match: Dayne St. Clair stole the show with eight saves, including a first-half penalty stop on Patryk Klimala. The Canadian international carried the Loons to a first victory of 2022 and added momentum in the early stages of the new campaign.

Moment of the Match: Luis Amarilla delivered the lone goal of the match, getting on the end of a Hassani Dotson cross and finding the bottom-left corner with his shot. Amarilla showed composure in the box and got to celebrate his first goal back with the Loons.

Match to Forget: Patryk Klimala will feel disappointed after failing to score from the penalty spot in the first-half. Klimala also failed to offer much in the final third, registering only one shot out of four on goal.

Man of the Match: Josef Martinez caught the eye in this match, converting from the penalty spot in the 59th minute. Martinez nearly added another goal in the 81st minute, but an outstanding save from Charlotte FC goalkeeper Kristijan Kahlina stopped it.

Moment of the Match: Jake Mulraney earned the win for Atlanta, scoring with a deflection in the sixth minute of stoppage time.

Match to Forget: Charlotte FC left back Christian Fuchs failed to stop the cross that led to the winning goal and got burned by Mulraney in the box. He also badly misplaced a pass early in the match that nearly led to a goal.

Man of the Match: The defending champions have plenty to choose from, but Talles Magno’s goal and assist are hard to argue with.

Moment of the Match: Magno’s 64th-minute goal was timely, and killed off any thoughts about a Montréal comeback after finally getting on the board.

Match to Forget: Veteran midfielder Victor Wanyama was not able to get his line settled in at any point and his error of getting dispossessed in the run-up to the final goal made for one to forget.

Man of the Match: You always have a chance when you have Lucas Zelarayán on the field, and he delivered the equalizer in style from outside the box.

Moment of the Match: Derrick Etienne Jr’s 65th-minute goal put the game firmly in control for his team. Individually, it probably made up for a frustrating first half where Etienne had taken clear contact in the box that was not reviewed and had a goal disallowed for a close offside call.

Match to Forget: The Toronto backline was a mess, but Ifunanyachi Achara’s 42- minute shift in substitution was bizarre. Achara did not see much action after coming in for an injured Jahkeele Marshall-Rutty in the 12th minute, making way for Ralph Priso in the 55th.

Man of the Match: Ismael Tajouri-Shradi’s substitution shift was efficient and productive. In just 11 touches, Tajouri Shradi scored the second-half header to secure the win and maintained an 88% passing clip.

Moment of the Match: Kwadwo Opoku’s opener set LAFC up for success and probably aided Brek Shea’s meltdown in the moments after.

Match to Forget: Shea’s red card in first-half stoppage time was equal parts predictable unnecessary considering Miami was already trailing 1-0. Shea, who was not even the last defender, put arms on Brian Rodríguez ,who was working on making an open run to make the comeback completely unrealistic.

Man of the Match: Alex Roldan’s two-way abilities were on display. His yellow card paled in comparison to his assist on the game-winning goal, four tackles, three clearances and 81% passing rate on 66 touches.

Moment of the Match: The late game-winner was a well-worked team goal, and Arreaga made no mistake with the supply from Roldan.

Match to Forget: The Galaxy very well could have walked away with an important road win if it was not for Efrain Alvarez’s foul to set up Fredy Montero’s penalty in the first half.

Man of the Match: Darwin Quintero propelled the Dynamo to a home win with two goals. The first was a tap-in and the second was a powerful strike into the top right corner. Quintero’s goals helped the Dynamo find the difference in a tightly-contested match.

Moment of the Match: Quintero scored what might be considered one of this week’s best goals in the 50th minute. He found a loose ball near the top of the box and hit the back of the net with a powerful first-time shot.

Match to Forget: Ryan Gauld struggled to put his mark on this match, and the Whitecaps needed something from him in the attack as they searched for an equalizer. The Whitecaps’ attack struggled, with only two shots on goal from 17 total shots.

Man of the Match: Sergio Santos was a handful all match long, with his work on the opening Union goal setting the tone for the night.

Moment of the Match: The Union’s opening goal was a textbook team goal, with Santos burning his man to find Cory Burke’s run and finish to help the home team take control.

Match to Forget: Jackson Yueill was beaten on the Union’s opening goal, then later committed the handball penalty offense to give the Union an insurance goal via penalty kick.

Man of the Match: Sergio Cordova scored the first goal of Real Salt Lake’s incredible comeback and jumpstarted the RSL attack with four shots and two on goal. It was the first goal in an RSL uniform for the 24-year-old on loan from FC Augsburg.

Moment of the Match: Real Salt Lake completed the comeback in the third minute of second-half stoppage time, when Tate Schmitt found a little space and sent a well-placed shot into the opposite side netting. Schmitt’s goal capped RSL’s comeback from three goals down in the snow to earn the team its second win in a row.

Match to Forget: The second half was rough for Andrew Farrell. Farrell missed a header on RSL’s first goal, then couldn’t stop an in-swinging free kick on the equalizer. The Revs’ defense collapsed in the final 12 minutes of the match.

Man of the Match: Cincinnati striker Brandon Vazquez’s brace represented the first two goals of the 2022 campaign. On the first, he got the better of Orlando goalkeeper Pedro Gallese at point-blank. The second, he made no mistake when he got a ball on a platter, also from close range, from Dominique Badji.

Moment of the Match: Vazquez’s second goal, the game-winner gave Cincinnati what it needed to close out the nervy game as a winner for the first time in 2022.

Match to Forget: Orlando City defender Ruan will appear on Badji’s sizzle reel after getting strong-armed and taken out of the equation in the assist on the second goal. Whether Badji truly out-muscled Ruan on the contact, or he was trying to get the referee’s attention, he was simply a passenger.

Man of the Match: It was a great showing for Stanislav Ivanov, whose deft touch scored the Fire’s first goal in the 32nd minute. Ivanov also won the majority of his duels and contributed two shots.

Moment of the Match: The Fire sealed the win in the 81st minute, when Gaston Jimenez sent an inch-perfect cross across the 18-yard box for Jonathan Bornstein to catch it clean and score the Fire’s second goal.

Match to Forget: D.C. United striker Ola Kamara couldn’t get much going in this game. He had only one shot and struggled to combine with his teammates to create chances.

Man of the Match: Brandon Servania had a goal-bound blast saved by a stunning Joe Willis save, but still made a big impact, as he delivered the pass that helped Paul Arriola draw the game-winning penalty, then served up the pass Alan Velasco dribbled half the field before scoring a stunner in his MLS debut.

Moment of the Match: Alan Velasco’s arrival to the FC Dallas lineup was worth the wait. Velasco scored an incredible solo goal by dribbling past half the Nashville SC team in the 87th minute.

Match to Forget: Nashville had nearly weathered a storm of FC Dalla s chances until Jack Maher drew a penalty by dragging Paul Arriola down in the box in the 81st minute.

Man of the Match: Mark-Anthony Kaye pulled the strings all night long against Sporting KC, easing past defenders and making three key passes. To top it off, Kaye scored to make it 2-0 in the 51st minute.

Moment of the Match: Diego Rubio scored on his former club in the 21st minute, finishing off a neat assist from Lucas Eteves. Rubio scored in his second game in a row.

Match to Forget: Sporting KC centerback Andreu Fontas struggled mightily in this match. He found himself out of position on the first goal. Sporting KC’s struggle with injuries in the midfield made things much more difficult on the back line.

Man of the Match: Bill Tuiloma did it all for the Timbers, delivering the winning goal while also being a force in the back, contributing a game-high four interceptions to go with six clearances and 46 of 51 passes complete. He also nearly scored another goal earlier in the match, only to have his header hit off the post.

Moment of the Match: Diego Chara delivered the perfect service and Tuiloma raced in to power home the winning header finish. His Griddy celebration wasn’t bad either.

Match to Forget: Gabrielsen was beaten on the winning goal, losing his mark on Tuiloma.