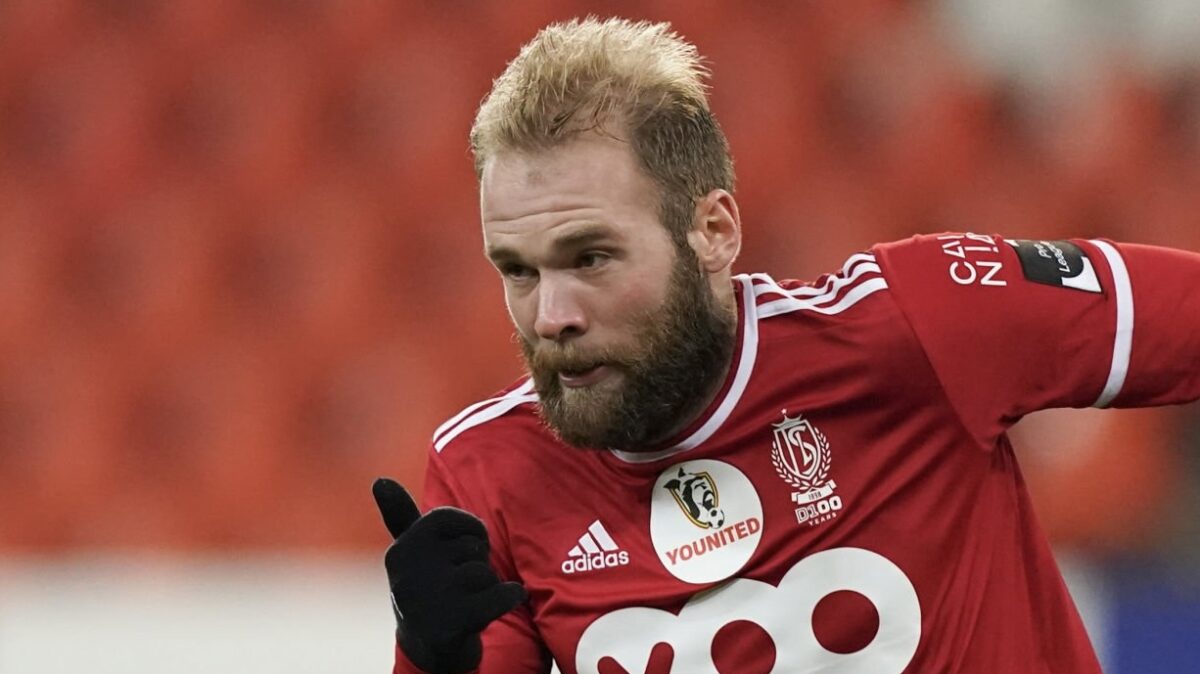 St. Louis City SC made its latest major signing in preparation for its debut MLS campaign in 2023.

Joao Klauss has signed with the expansion side as a Designated Player and will officially join in July 2022 at the conclusion of his contract with Bundesliga side Hoffenheim. The 25-year-old Brazilian is currently on loan with Belgian club Sint-Truiden, where he has contributed three goals and five assists in 27 combined appearances.

“Klauss is a player I have known since a very young age and I continued following his career,” St. Louis City SC sporting director Lutz Pfannenstiel said in a release. “In fact, Hoffenheim director of football Alexander Rosen and I played a major role in bringing him to Germany when I was at Hoffenheim. He has tremendous capacity to score and create chances for his teammates. Those attributes will surely help our team. His prime is ahead of him, and we are excited to help him maximize his potential.”

Klauss has only made 10 appearances for Hoffenheim, being loaned out on several occasions. The forward has also played for Standard Liege, HJK Helsinki, and LASK in his career, totaling 57 goals in 150 appearances.

Here is all of the recent MLS News:

Quinonez’s loan will run through the remainder of the 2022 MLS season and he will occupy an international roster slot. FC Dallas has an option to buy Quinonez permanently at the conclusion of the loan. The Western Conference club also traded $100,000 in 2022 General Allocation Money to the Portland Timbers in exchange for Quiñónez’s Discovery Priority.

Quiñónez, 20, joins FC Dallas after starting his professional soccer career with Barcelona SC’s academy and ascending to the first team. He’s appeared in 11 matches overall for Barcelona over two seasons and made his senior debut for the Ecuadorian national team in an international friendly vs. Mexico last October.

He joins Matt Hedges, Marco Farfan, and Nanu in the defensive ranks.

Mikael Uhre did not feature in the Philadelphia Union’s opening day draw with Minnesota United but will be ready to go for a trip up north this weekend.

Union head coach Jim Curtin confirmed to reporters Thursday that Uhre is eligible to play at CF Montreal on Saturday. Uhre, the new Designated Player signing from Danish club Brondby, was in attendance at Subaru Park on opening weekend and got a first-hand look at his new squad.

“He’ll be ready no question about it,” Curtin said Thursday. “He’s had a good week of training with the group and he is still getting used to his team mates but he’s shown really well in training. He has some speed to stretch the defense and he’s shown some really good movement in the box and scored a lot of goals this week.

“He has minimal training sessions with the group but his body has responded well so I think it’s safe to say he’ll play a role this weekend’s match one way or the other that is for sure,” Curtin added.

Uhre, 27, excelled in Denmark in each of the past two seasons, helping Brondby reach the UEFA Europa League group stage and winning the Golden Boot in the 2020-21 campaign. The Danish international totaled 48 goals and 13 assists in 123 combined appearances for Brondby and also played for Sonderjyske and Skive before his move to the top-flight side.

The Union will add Uhre to an attacking front which already features Sergio Santos, Cory Burke, and Julian Carranza.

Cristhian Paredes became the latest Portland Timbers player to get rewarded with a new contract at the club.

Paredes signed a four-year contract extension on Wednesday which will take him through the 2025 season and includes an option for 2026. The 23-year-old joined the Timbers in 2018 and has totaled eight goals and eight assists in 79 regular season appearances.

The Paraguayan originally joined the Western Conference club on loan from Liga MX side Club America before being acquired on a permanent deal. Paredes has earned six caps for the Paraguayan national team and has also represented his country at several youth levels.

Portland earned a 2-2 draw with the New England Revolution in its season opener on Saturday.

CF Montreal Romell Quioto and Orlando City duo Robin Jansson and Junior Urso were all fined undisclosed amounts for actions in Sunday’s 2-0 win for the Lions. Quioto was ejected from the match in the 66th minute and failed to leave the field in a timely manner.

Jansson was also ejected in the 81st minute and was also found guilty of failing to leave the field in a timely manner. Urso was found guilty of simulation/embellishment in the 87th minute of the match, however was not originally yellow carded the match.

In addition to the trio of incidents in the Orlando City/CF Montreal match, several players from LAFC and the Colorado Rapids were also fined.

Both Western Conference clubs were found in violation of the Mass Confrontation Policy during the 56th minute of their match on Saturday, a 3-0 victory for the hosts LAFC. Each club will be issued an official warning for their first violation.

Colorado Rapids defender Lalas Abubakar and forward Michael Barrios, along with LAFC midfielder Kellyn Acosta and defender Franco Escobar were all issued undisclosed fines for inciting and/or escalating a mass confrontation. No player was given a yellow card for their actions during the incident.