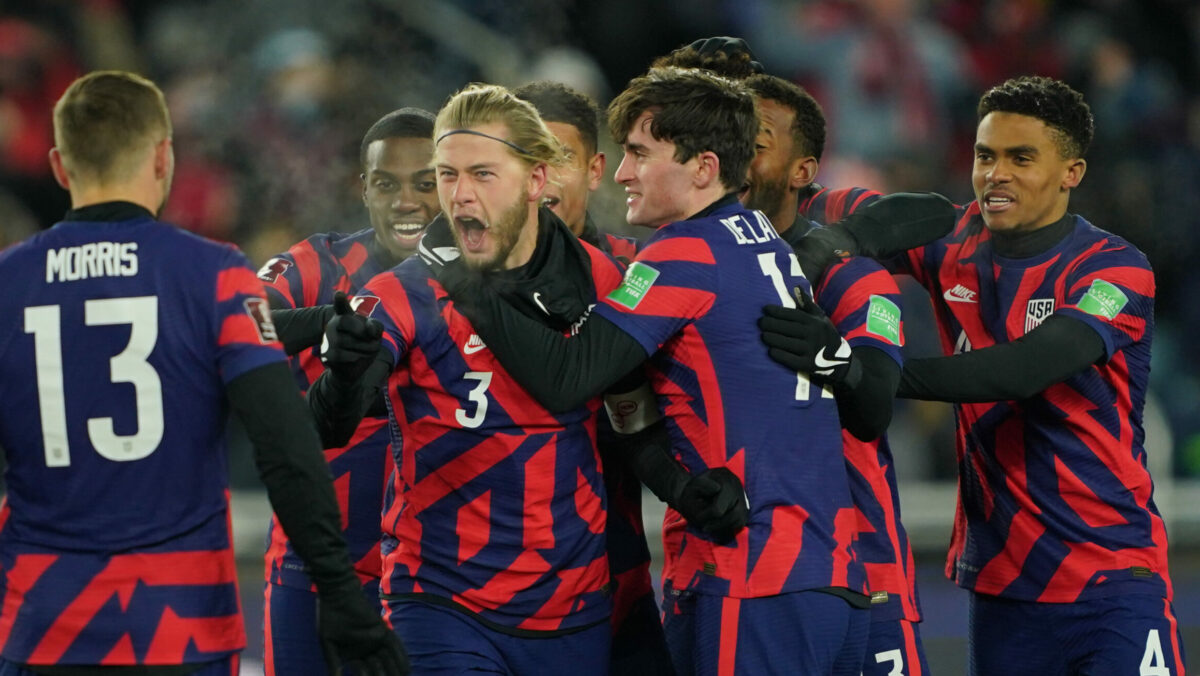 We are just days away from the final three World Cup qualifiers for the U.S. men’s national team to secure its place at the 2022 World Cup, and Gregg Berhalter is facing some difficult challenges as he prepares for the crucial clashes in Mexico, against Panama, and in Costa Rica.

Weston McKennie’s broken foot has left the USMNT without arguably its best player for the most important matches the Americans have played in five years, but adversity is nothing new for a team that has not had the luxury of fielding a full-strength team at any point in the Octagonal.

Replacing McKennie is only one of the areas of concern for the U.S. team heading into the final qualifying window. The team’s striker pool is an unsettled bunch, with Ricardo Pepi in the midst of a goal drought, but with Josh Sargent and Jordan Pefok gaining momentum as they push to regain their places on the USMNT.

Goalkeeper has suddenly become an area of concern, with both Zack Steffen and Matt Turner currently dealing with injury issues. Neither has been ruled out for qualifiers just yet, but the uncertainty surrounding their injury situations will have USMNT understandably nervous.

Plenty can still change in the next two weeks, before the USMNT squad convenes ahead of the trip to Mexico on March 24, but for now it is time to take stock of where the current player pool stands, and to consider the options most likely to make Berhalter’s squad for these all-important matches.

We put together a projected 26-player roster at the start of March, but plenty has happened since then, so it’s time to take a revised look at what the USMNT roster could look like for the upcoming World Cup qualifiers:

There are some serious question marks surrounding the goalkeeper position due to injury issues being faced by the top two options in the pool. Matt Turner and Zack Steffen have both missed matches in recent weeks, and with the first March qualifier against Mexico just a week away, Gregg Berhalter finds himself facing some tough decisions.

Turner is dealing with a foot injury which he may have picked up during the USMNT’s qualifying win against Honduras in early February, while Steffen is battling a shoulder injury. Steffen has reportedly returned to training for Manchester City, while Turner has yet to return to action for the Revs.

The good news in the goalkeeper department is that Ethan Horvath has taken over as the starter for Nottingham Forest, taking advantage of a suspension to Brice Samba to make the job his own. Horvath is unbeaten in five straight starts and is in confident form heading into the international window.

The memories of Horvath’s Nations League heroics against Mexico last summer are still fresh, and having him start at the Azteca would be a fitting assignment considering his success against El Tri last year. That said, Sean Johnson remains a good candidate to start at some point in the qualifiers.

If Steffen is not recovered enough to take part in USMNT camp, and Berhalter is without both Steffen and Turner when the team convenes in Houston next week, then young Chicago Fire goalkeeper Gabriel Slonina could earn the call-up after his impressive start to the MLS season.

The big question here is whether Berhalter is ready to bring back Brooks, and the reality is there is no good reason not to call him back for the March qualifiers. Mark McKenzie has been the preferred choice over Brooks in recent windows, but McKenzie’s playing time has disappeared with Genk while Brooks is playing at a consistently good level for Wolfsburg these days.

There is also the fact Chris Richards has been sidelined by injury for the past six weeks and hasn’t been in action since his start for the USMNT against Canada. With Richards unlikely to be an option, Brooks should earn his return. All that said, if Richards and McKenzie are ultimately left out and Brooks still can’t earn a call, then it is time to seriously consider the possibility that Berhalter will never call him back again.

One player who has worked his way back into the conversation is Aaron Long, who has recovered from the torn Achilles he suffered last year, and has begun the new MLS season in good form. With three starts under his belt, Long could very well wind up being one of Berhalter’s four or five central defenders in camp.

Erik Palmer-Brown is another player who could benefit from a John Brooks omission, and could also be an option if Berhalter brings in five central defenders. Palmer-Brown has made eight straight starts for Ligue 1 side Troyes, helping the team climb out of the relegation zone. He is the type of sharp-passing central defender who can do well in Berhalter’s system, but he hasn’t been part of the Octagonal and it could be risky tossing him in given he hasn’t been a recent part of the set-up.

At fullback, Sergiño Dest has hit an excellent run of form, and has been one of the most in-form American player in Europe at the moment. If Berhalter brings two other right backs along with Dest like he did for the January-February qualifiers then we could see a Reggie Cannon-DeAndre Yedlin tandem again, with Dest joining Antonee Robinson as the left back options.

George Bello earned his first start for Arminia Bielefeld last weekend and has earned regular appearances so he could have edged past Sam Vines in the left back pecking order if Berhalter decides to bring a second natural left back rather than just having Dest deputize in the role when needed.

One player who had fallen out of the picture, but is making a late push, is Joe Scally, who had lost his starting spot with Borussia Moenchengladbach before starting the team’s two most recent matches. The teenager hadn’t started in six weeks, but the two recent starts could at least earn him a look from Berhalter.

Weston McKennie’s absence due to injury leaves a huge hole in the USMNT midfield, and Berhalter will to call on multiple players to help him fill that void. Luca De La Torre’s stock is soaring after his strong showing against Honduras, and his continued good form with Heracles. Whether he gets the starting nod or not could depend on whether he can hold off Gianluca Busio, who should return to the fold after missing the January-February qualifiers due to Covid-19.

Berhalter could also be tempted to shift Brenden Aaronson into a central midfield role, where he plays regularly on the club level. Aaronson has been used mostly as a winger for the USMNT, but given McKennie’s absence, turning to the Red Bull Salzburg midfielder, who is in excellent form, could be the answer.

Kellyn Acosta is another option to start, particularly against Mexico, which he has faced multiple times, including in qualifying at the Azteca in 2017.

Cristian Roldan’s form for Seattle has been outstanding and should earn him a call back, while Lletget should also return to the fold.

The USMNT striker situation is a bit of a worrisome one, with Ricardo Pepi having gone five months since his last goal for club or country (his two-goal effort against Jamaica in October being the last goals he scored). His acclimation to Augsburg hasn’t been the easiest, and his contributions in recent qualifiers have been a shadow of what they were earlier in the Octagonal.

All that said, Pepi should be one of the two strikers, with Jesus Ferreira a good bet to be the other option. Ferreira has earned regular starts as a striker in FC Dallas’ system to start the MLS season and showed well in that role in the Octagonal win against El Salvador in January.

Berhalter’s growing admiration for Ferreira could be bad news for Josh Sargent’s chances of a call. Sargent has fought to earn a starting role for Norwich City, but the goals haven’t flowed for the Norwich City attacker, who has been used almost exçlusively in a wide role by the Canaries, which could also work against him.

Jordan Pefok is another player Berhalter has to at least consider given his club form with Young Boys. He has scored six goals in his past seven matches, but even that run isn’t likely to get him past Pepi, Sargent and Ferreira, though he shouldn’t be that far from a call.

On the wings, Christian Pulisic, Brenden Aaronson and Tim Weah give Berhalter a trio of good options, with Gio Reyna someone Berhalter can consider now that he has returned from his latest injury setback.

Reyna made a 28-minute appearance last weekend after missing two matches with a hamstring issue, (UPDATED) and registered the winning assist for Dortmund on Wednesday in another sub’s appearance. Given the stakes in qualifying, with the March matches ultimately deciding if the USMNT qualifies for the World Cup, it wouldn’t be a total shock if Berhalter brought Reyna in for a closer look. After Wednesday’s assist, we are including Reyna in this projection.