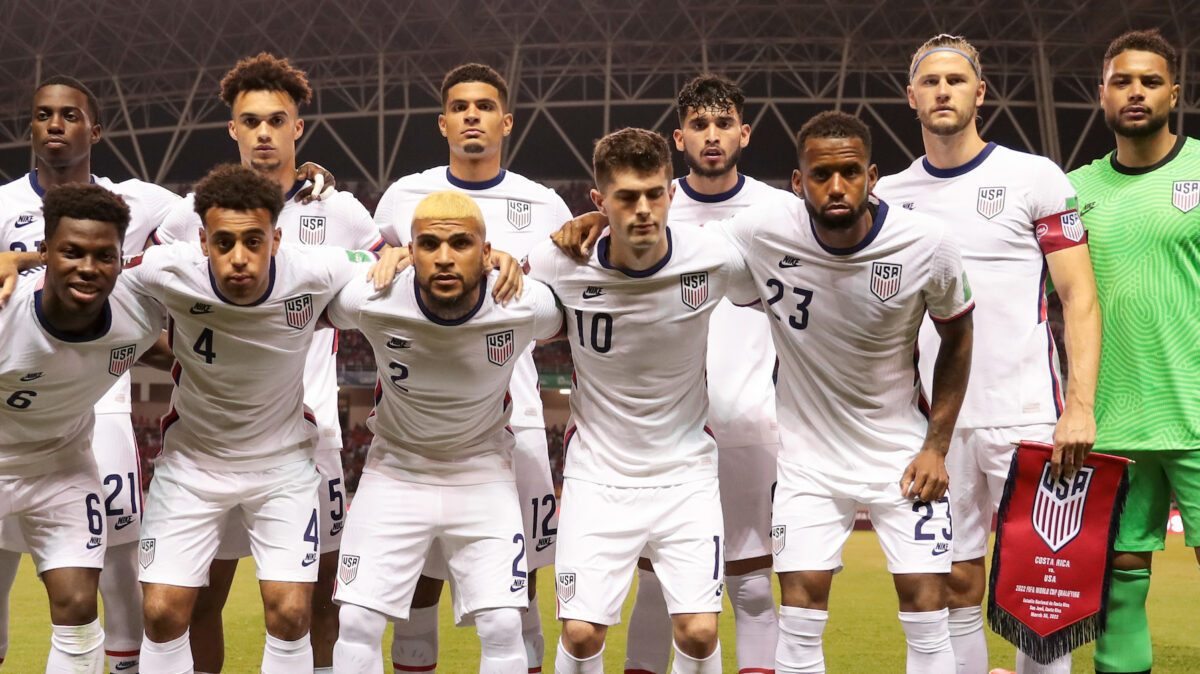 The World Cup berth is secure and the U.S. men’s national team is heading back to the competition for the first time since 2014, and now the attention turns to the next seven months and the race to make the final roster.

The competition for places is expected to be a fierce one, and plenty can and will change over the course of the next six months. June will go a long way toward clarifying the depth chart with four matches expected to be played.

The March qualifiers re-introduced some centerbacks to the conversation, with Aaron Long and Erik Palmer-Brown joining a crowded field of central defenders. Gio Reyna also made his return to action, but suffered a season-ending injury shortly after returning to Borussia Dortmund.

Reyna’s status will be one of the top storylines in the coming months, and while we aren’t likely to see him compete this summer, Berhalter will be hoping the time off will allow Reyna to get strong enough to stay on the field in the second half of 2022 because he is one of the most talented players in the USMNT player pool.

The two positions that will be watched most closely in the coming months are striker and goalkeeper. Zack Steffen hasn’t had the best season for Manchester City while Matt Turner is gearing up for his transfer to Arsenal this summer. Ethan Horvath has returned to the Nottingham Forest bench while teenager Gabriel Slonina is turning heads, and has also attracted the attention of the Polish national team, which he is eligible to play for.

Jesus Ferreira has gained the most ground at the striker position, benefiting from Ricardo Pepi’s struggles at Augsburg and Josh Sargen’t inconsistent form at Norwich City. Jordan Pefok has continued to score goals in bunches and should get his chance in June to show he’s making real progress in the USMNT pecking order.

There are several key players injured at the moment, but those injuries won’t stand in the way of their selections to our World Cup roster projection. For some, like Reyna, Steffen and Chris Richards, persistent injuries have been an issue to keep an eye on, but for the purposes of our projection we will operate as if all of these players will be healthy come November (yes, wishful thinking, but still).

With all this in mind, here is the April’s edition of SBI’s Projected 2022 USMNT World Cup squad:

Steffen’s Manchester City struggles leave you wondering just what will happen this summer. Will he consider a move for more consistent playing time, or will he stay on the bench at Manchester City?

Matt Turner is back from a foot injury that kept him sidelined for two months, and now the clock is ticking on his time in New England. Turner should get a good run of games with the Revs before leaving for Arsenal this summer, and it’s a good bet he will see some action with the USMNT this summer.

Gabriel Slonina is garnering plenty of attention as a 17-year-old starter in MLS, setting new records seemingly on a weekly basis. There is a growing urgency to get him cap-tied, but Slonina is in no need to rush a decision.

Ethan has returned to a backup role with Nottingham Forest, and could also be looking for a move this summer to boost his chances of earning a World Cup roster spot.

Dest and Richards have had their European seasons cut short by injuries, but Dest is a lock starter when healthy and Richards has the upside to catapult himself into a regular USMNT role if he can stay healthy and earn regular playing time next season.

Central defender is a crowded field, with Long and Palmer-Brown added to the mix. Their inclusion in the conversation could push John Brooks even further away from a return, though it will be interesting to see where Brooks winds up as he heads into the summer as a a free agent.

Cameron Carter-Vickers is enjoying a standout season with Celtic and deserves a closer look, though he finds himself behind a half-dozen other central defenders Berhalter has worked with more closely.

The fullback spots are a complicated combo, with Berhalter’s plans hinging on having a healthy Dest, who can play both left back and right back. With a healthy Dest, Berhalter can afford to bring two other right backs, such as DeAndre Yedlin and Reggie Cannon, but without Dest Berhalter will need to turn to someone like George Bello or Sam Vines as a backup left back.

Joe Scally has been consistently mentioned as someone Berhalter should be looking at more closely, and if he can close out the Bundesliga season with a steady run of starts, then a June call-up is a good bet.

The first four midfield roster spots are pretty settled, with Luca De La Torre having made the most progress in 2022 to secure his own place in the pecking order. Gianluca Busio has continued to start regularly in Serie A with Venezia, but hasn’t had a chance to start for the USMNT recently.

One player who is boosting their stock with a strong start to the MLS season is Djordje Mihailovic. His ability to create goal-scoring chances makes him a unique midfield option, especially if Berhalter finds himself wanting some more of an attacking threat off the bench for his midfield.

The Gio Reyna situation is the one to watch, because if his injuries woes carry over into next season then it will get tougher and tougher to expect him to be a part of the World Cup squad. He has time to recover and get stronger in the next two months before preseason with Borussia Dortmund.

At striker, Ricardo Pepi’s move to Augsburg has been a disappointment, and he hasn’t scored a goal for club or country since October. That has allowed former FC Dallas teammate Jesus Ferreira to edge ahead of him in the depth chart, but his struggles aren’t quite ready to drop him out of the picture. Berhalter likes his game and will give him a chance to re-establish himself. He can afford to be a bit patient since there aren’t exactly a line of strikers beating down the door to take his spot.

Jordan Pefok is one player enjoying an outstanding season, as he is poised to win the Golden Boot in the Swiss League. Pefok’s goal-scoring success should earn him a look in June while Josh Sargent’s current injury issues are keeping him from being able to boost his chances of a USMNT return.

In terms of winger options, particularly if Reyna isn’t available, Paul Arriola and Jordan Morris are in the conversation. Matthew Hoppe’s disappointing move to Mallorca has taken the air out of his national team candidacy, but a good transfer move this summer could revive it.

What do you think of this 23-man roster? Who missed the cut that you would want to see on the team? Who made the squad that you are happy to see included?