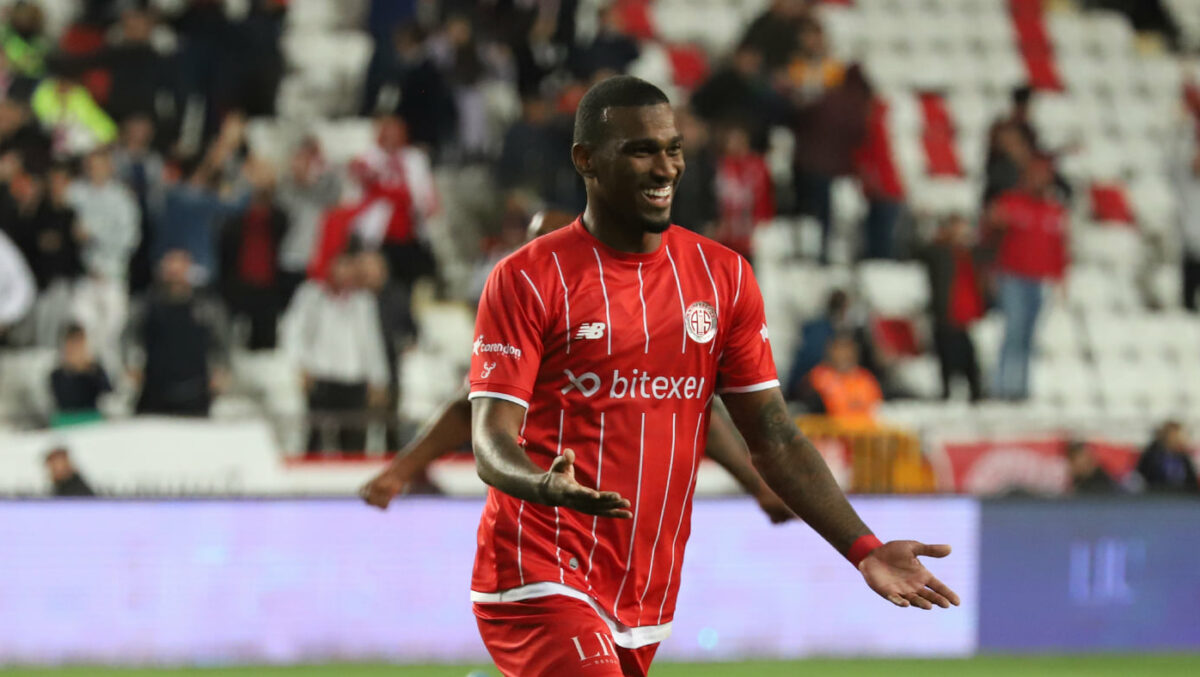 Turkish Super Lig club Antalyaspor has continued to fight for a spot in European competition for next season and American forward Haji Wright has been a major reason for its push up the league table.

Haji Wright scored the opening goal on Saturday as Antalyaspor earned a sixth-consecutive victory, defeating Alanyaspor 3-1 away from home. Wright now has 10 league goals for Antalyaspor this season and five in his last five appearances, helping him earn SBI’s Americans Abroad Player of the Week honors.

The 24-year-old continued his strong run of form, breaking the deadlock in the 17th minute of the eventual win. Wright watched as Antalyaspor extended its lead before and after halftime, picking up a 14th league win out of 33 matches played so far.

Wright also won the most duels in the match (6) and drew the most fouls (2), continuing to be a havoc for opposing defenders in the Super Lig. His presence down the stretch for Antalyaspor will be crucial if Nuri Sahin’s side wants to clinch a top-four finish later this May.

Erik Palmer-Brown is quickly making a name for himself in the Troyes squad and might be just the answer to keep the Ligue 1 side safe for another season.

Palmer-Brown earned his 15th league appearance on Sunday as Troyes earned a 1-1 draw with Strasbourg. The U.S. men’s national team defender was solid all around for Troyes, winning five of his duels, making two blocks, two tackles, and seven clearances.

The 24-year-old has helped Troyes improve its chances of survival over recent weeks and will push to remain in the starting lineup for the final six matches.

USMNT midfielder made his first start for RB Leipzig in almost two months on Sunday and helped the Bundesliga side remain in the running for a top-four finish.

Adams logged 83 minutes in a 1-0 road victory over Bayer Leverkusen, a win that extended RB Leipzig’s lead to two points over fifth place Freiburg. The 23-year-old completed 55 of 61 passes (90% completion rate), made three recoveries, and won two of his four duels.

RB Leipzig not only remains in the fight for a top-four finish, but also is in the mix for a Europa League title and a German Cup. Adams’ fitness down the stretch could play a key role for Domenico Tedesco’s side.

Kaiserslautern FC picked up a fifth victory from its last six matches and American striker Terrence Boyd was among the goals once again.

Boyd scored the winning goal in Kaiserslautern’s 3-1 victory over Saarbrucken, keeping the German third tier side two points ahead in the race for automatic promotion to the 2. Bundesliga. The 30-year-old Boyd has now scored six goals in his last three outings for Kaiserslautern and overall has 16 league goals in the season.

Kaiserslautern has five matches left this season and will rely on Boyd to continue his hot run over the next few weeks.

Swiss Pro League Young Boys will not retain its league title this spring, but could have one of its star players bring home the Golden Boot.

Jordan Pefok netted his 19th league goal of the season in a 2-1 defeat to FC Zurich on Saturday. The USMNT striker leads the Golden Boot race by three goals over second place Assan Ceesay and overall has totaled 24 goals for Young Boys this season in all competitions.

Pefok’s ability in the box has truly helped him become one of the top American forward prospects going forward. Young Boys will now hope Pefok can propel it back to a European competition next season, with Matteo Vanetta’s side only one point clear in third place.