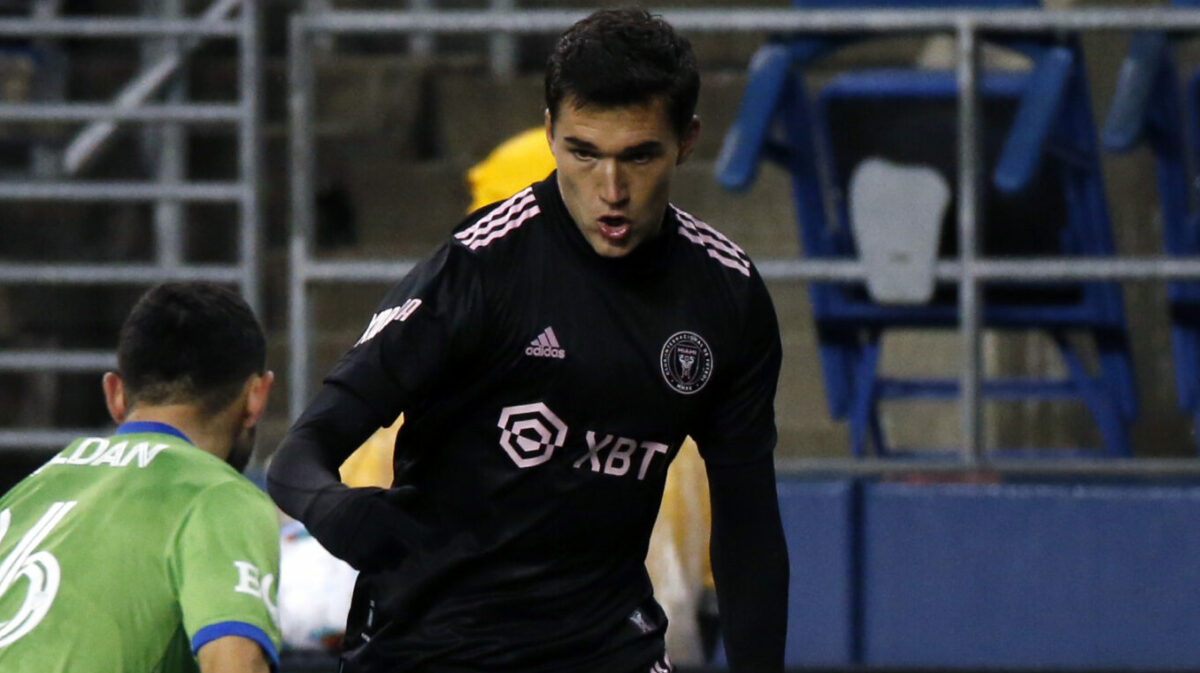 Inter Miami traveled across the country on Saturday for an interconference showdown with the Seattle Sounders and Phil Neville’s side left Lumen Field with a second-consecutive victory in the 2022 MLS season.

Robbie Robinson scored the winning goal for the Herons, helping Inter Miami earn a 1-0 road win against the in-form Sounders. Former Sounders homegrown defender DeAndre Yedlin assisted on the lone goal of the match, delivering an impactful return to Washington.

The defeat for the Sounders snapped a seven-match unbeaten run in all competitions.

Toronto FC claimed an important three points at BMO Field against the Philadelphia Union, picking up a 2-1 win on Saturday night. Goals from Jesus Jimenez and Alejandro Pozuelo 12 minutes apart helped TFC snap the Union’s unbeaten start to 2022 and also move up to fifth place in the Eastern Conference.

Austin FC stormed back late with three goals in the final 10 minutes at Audi Field to earn a 3-2 victory over hosts D.C. United. Ola Kamara’s first-half brace helped Hernan Losada’s side take a 2-0 lead into the halftime break, but the Norwegian international was sent off for two yellow card offenses in a busy first half. Ruben Gabrielsen completed the comeback for Josh Wolff’s side, heading home a Diego Fagundez cross at the near post of Bill Hamid’s goal.

Djordje Mihailovic delivered a Man of the Match performance for CF Montreal, scoring once and assisting once in a 2-1 home victory over the Vancouver Whitecaps. Wilfried Nancy’s side have won their last three league matches while the Whitecaps have lost four of their last five overall.

Elsewhere, the San Jose Earthquakes claimed one point at home in a 2-2 draw with Nashville SC while the New England Revolution defeated Charlotte FC 2-1 at Gillette Stadium. Minnesota United also walked away with three points on Saturday after using two late goals to pull away from the visiting Rapids.

Here is a look back at this weekend’s MLS action:

Man of the Match: Valentin Castellanos has faced some early criticism in the 2022 MLS season, but the Argentine answered back in style on Sunday. Castellanos was a thorn in Real Salt Lake’s side all afternoon, scoring four goals in a match for the first time in his league career.

Moment of the Match: NYCFC started early with two goals in the opening 15 minutes, but Castellanos’ penalty kick finish in the 40th minute truly put the hosts in cruise control for the remainder of the match.

Match to Forget: While his backline did not help him, Zac MacMath failed to come up with a save on any of NYCFC’s goals. The veteran goalkeeper came out of his net needlessly on two of NYCFC’s eventual goals and will be disappointed he couldn’t help keep the scoreline from spiraling out of control.

Man of the Match: Cristian Arango got the scoring going for LAFC and would’ve finished the day with two goals if not for the crossbar denying him later in the match.

Moment of the Match: Ismael Tajouri-Shradi needed only four minutes to make an impact off of the bench for LAFC, beating Tim Melia from an audacious angle to swing momentum back into the hosts favor.

Match to Forget: Melia has delivered important moments for SKC in the past, but the 35-year-old will feel disappointed to concede from long-range on Tajouri-Shradi’s effort. LAFC iced the victory not long after.

Man of the Match: Djordje Mihailovic scored a goal and set up another for his fourth goal in four matches.

Moment of the Match: Tossaint Ricketts appeared to score a last-minute equalizer for the Whitecaps only to have a VAR review determine that he was offside on the play, negating the goal.

Match to Forget: There were plenty of breakdowns in Vancouver’s defense on Montreal’s goals, but Rank Veselinovic was particularly lost on both sequences.

Man of the Match: Jeremy Ebobisse helped the Earthquakes claw back from two deficits, including one via a stunning free kick.

Moment of the Match: Ebobisse’s first goal was a beautiful left-footed free kick finish, and whether or not you think Joe Willis should have done better on it, the fact is it was a well-placed strike.

Match to Forget: Jackson Yueill was caught upfield in no-man’s land on Nashville’s first goal and just failed to have much influence on the midfield play all match.

Man of the Match: FC Cincinnati goalkeeper Alec Kann produced seven saves and should get most of the credit for helping his side earn its first clean sheet of the season.

Moment of the Match: Kann’s penalty save in the 67th minute is what earned the point for FC Cincinnati. Dominique Badji was ruled guilty of a handball to set Marcelino Moreno up with a golden opportunity, but Kann’s instincts to go low and left served him well.

Match to Forget: Atlanta certainly had the better offensive game and there is blame to go around for missed opportunities, but Moreno’s miss from the spot was obviously the most clear-cut mistake made.

Man of the Match: Aljaz Ivacic made four saves in the draw for the Timbers, helping Portland register its second clean sheet of the 2022 season. Ivacic was the busier of the two goalkeepers and delivered key saves when called upon.

Moment of the Match: Fafa Picault had the best look in the second half for either club, but Ivacic dove to his left and denied the in-form forward from breaking the deadlock.

Match to Forget: Teenage Hadebe was sent off in the draw for the Dynamo, leaving his teammates to defend heavily for the final 15+ minutes.

Man of the Match: 23-year-old Maarten Paes made seven saves in goal for FC Dallas, helping the visitors leave Red Bull Arena with one point in their back pockets. Paes denied several Red Bulls players in the match, stepping up when his offensive teammates did not.

Moment of the Match: Patryk Klimala had Paes beat in the final minutes of the match, but the crossbar came to the goalkeeper’s rescue to deny the Polish forward a match-winning goal.

Match to Forget: Out of all of the offensive players in the match, Paul Arriola offered little to nothing in the match. Arriola played 86 minutes, but failed to register a shot on goal, while also losing nine of his 13 total duels in the match.

Man of the Match: Facundo Torres continued his impactful run in Orlando City’s attack, assisting once in the 2-0 win. Torres also won six of his eight duels and showed his creativity in the final third to help the Lions pick up an important three points in Ohio.

Moment of the Match: Ercan Kara’s goal in the early stages of the second half helped the Lions double their lead and truly add pressure to the Crew to turn things around. The Orlando City attackers all gelled together on the goal, passing from side to side before Kara one-timed his finish into the top-right corner.

Match to Forget: Milos Degenek failed to deal with Kara’s turn and shot for the second goal and eventually was substituted off as the Crew brought on some offensive players. The Australian international logged only 59 minutes on the night.

Man of the Match: Diego Fagundez helped spark the comeback win for Josh Wolff’s side, assisting twice in the final 10 minutes. Fagundez’s playmaking ability was on display as the veteran midfielder connected on Austin FC’s first and third goal.

Moment of the Match: Ruben Gabrielsen’s game-winning goal capped off a heroic comeback victory for Austin FC and condemned D.C. United to a humiliating home defeat.

Match to Forget: Bill Hamid failed to repel Gabrielsen’s header at the back post, allowing the late effort to squeeze in and propel Austin FC in front.

Man of the Match: Brandon Bye was sensational for the Revolution, assisting on the club’s first goal and covering a lot of ground from his right back position.

Moment of the Match: Matt Polster isn’t known for his goalscoring abilities, but the veteran midfielder’s positioning on the eventual deciding goal helped the Revs claim an important three points at home.

Match to Forget: Guzman Corujo’s failed clearance allowed the Revs to double their lead later in the second half after the centerback’s clearance redirected off of Polster and into Charlotte FC’s goal.

Man of the Match: Alejandro Pozuelo played the hero for Bob Bradley’s side on Saturday, scoring his second goal of the season. The Spanish playmaker was all over the field for Toronto FC, continuing to be impactful in big-time moments.

Moment of the Match: Jakob Glesnes almost helped the Union walk away with one point at BMO Field, but the Norwegian centerback skied his header off of a corner kick in stoppage time.

Match to Forget: Daniel Gazdag was quiet in the loss for the Union, losing 10 of his 11 duels, failing to complete any of his three dribble attempts, or any of his five crosses. Gazdag will hope for a bounce-back performance next weekend against CF Montreal.

Man of the Match: Raheem Edwards was strong all-around for the Galaxy, winning a match-high 14 duels and also drawing four fouls from the left back position. Edwards helped the Galaxy hold the host Fire to zero shots on goal.

Moment of the Match: Derrick Williams last-gasp header came close to giving the Galaxy a late victory at Soldier Field, but the defender headed too high in the fifth minute of second-half stoppage time.

Match to Forget: Kacper Przybylko was held in check by the Galaxy backline, as he failed to register a shot on goal and also lost five of his nine duels in the match. With Xherdan Shaqiri out, Przybylko will need to step up in Ezra Hendrickson’s attack.

Man of the Match: Robin Lod not only delivered the winning goal for Minnesota United, but also assisted once in the home win for Minnesota United. The Finnish forward swung momentum back in the Loons favor in the 77th minute before setting up Abu Danladi’s finish just two minutes later.

Moment of the Match: Danladi’s goal truly sucked the energy out of the Rapids players, giving the Loons a two-goal lead they would not let up.

Match to Forget: Rapids goalkeeper William Yarbrough will not like watching the tape of the two final goals in the match. Yarbrough was beaten down the middle for Lod’s eventual winning goal before failing to get a hand on Danladi’s low effort just two minutes later.

Man of the Match: Robbie Robinson played the hero for visiting Inter Miami on Saturday, scoring his first goal of the season and giving Phil Neville another strong attacking performance following Leonardo Campana’s from last week.

Moment of the Match: The last good opportunity for the Sounders fell to in-form attacker Cristian Roldan, but the USMNT midfielder was unable to get an effort past Nick Marsman in the 90th minute.

Match to Forget: Will Bruin was chosen to lead the line for the Sounders on Saturday, but was unable to offer anything in the final third. Bruin failed to register a shot on goal before eventually being replaced by Raul Ruidiaz in the 70th minute.