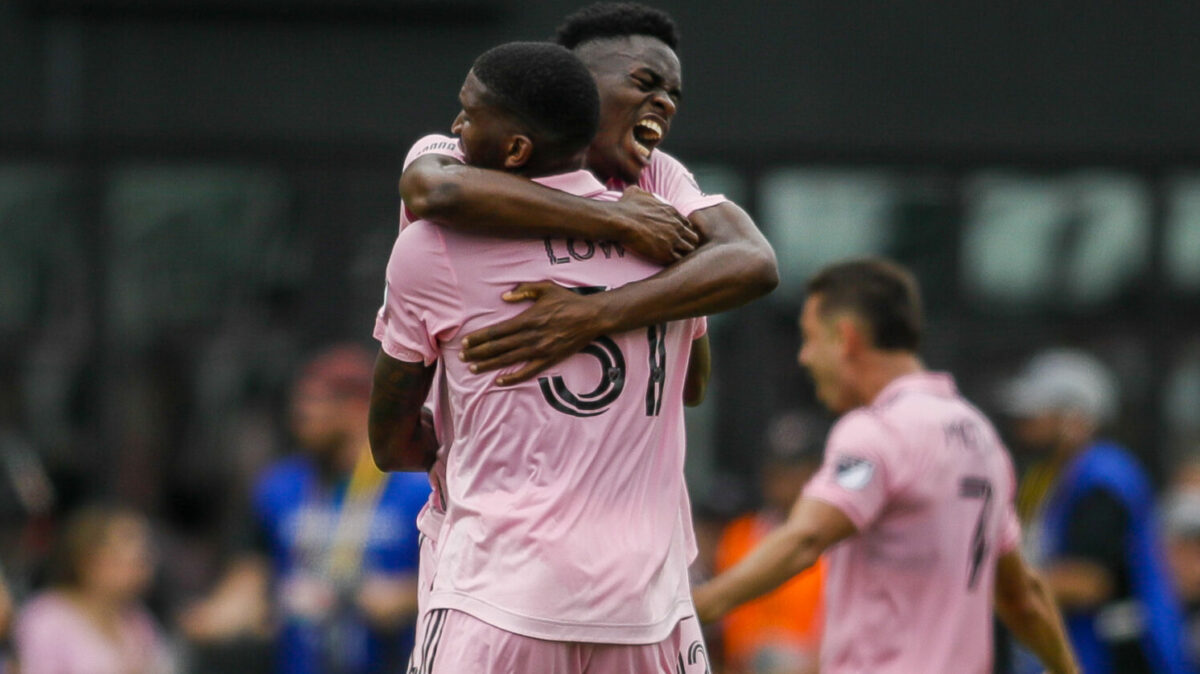 Week 8 of MLS action included a third-straight league win for Inter Miami, a dramatic nine-goal thriller between NYCFC and Toronto FC, and important victories for D.C. United and the San Jose Earthquakes.

Leonardo Campana helped Phil Neville’s side erase an early deficit in a 2-1 victory over Atlanta United at DRV PNK Stadium. Campana equalized for the Herons before setting up Bryce Duke for the winning goal in the second half.

NYCFC walked away from Citi Field with three points after hanging on for a 5-4 victory over Toronto FC. Despite a late dismissal to veteran Alfredo Morales, Ronny Deila’s side used goals from five different players to snap TFC’s unbeaten run.

The Quakes weren’t the only manager-less team to triumph. D.C. United earned a 3-2 win over the New England Revolution on the heels of the club firing Hernan Losada. Taxiarchis Fountas emerged as one of the top performers of the week with two goals.

CF Montreal stretched its unbeaten run to four games with a draw against the Philadelphia Union. Kei Kamara, the 37-year-old MLS legend, scored the equalizing goal in the second half.

Here is a look back on MLS matches from Week 8:

Man of the Match: Valentin Castellanos scored once, assisted once, and was a handful for the Toronto FC backline all day long. Castellanos delivered the most key passes (4), completed the most dribbles (2), and has four shots on goal. TFC is fortunate that Castellanos didn’t walk away with a hat trick or more.

Moment of the Match: Deandre Kerr was set up to score a stoppage-time equalizer for Toronto FC, but his 92nd minute shot blazed into the stands and let NYCFC off the hook.

Match to Forget: Alfredo Morales was sent off in stoppage time, which could’ve proved costly for NYCFC. Morales will still feel disappointed in his sending off, which will now see him suspended for next weekend’s date with San Jose.

Man of the Match: Kellyn Acosta delivered a solid shift defensively and also scored a rocket of a goal for LAFC. Acosta’s second-half strike helped give Steve Cherundolo’s side some needed confidence. The USMNT midfielder also won one duel and completed over 90% of his passes.

Moment of the Match: Danny Musovski came off of the bench and played the hero in the late stages at TQL Stadium. Musovski’s left-footed strike into the top-left corner proved to be the difference between the two clubs.

Match to Forget: Tyler Blackett was pestered constantly by Carlos Vela and was the weak link in FC Cincinnati’s backline. Blackett lost five of seven duels and conceded one foul on the night.

Man of the Match: Leonardo Campana continued to be impactful in the final third for Inter Miami, playing a key role in both goals of Sunday’s home win. Campana equalized in the 28th minute with his fifth goal in the past three matches and also assisted on Bryce Duke’s eventual winner.

Moment of the Match: Ronaldo Cisneros could’ve helped Atlanta United steal one point at the death, but his 98th minute header from point-blank range missed just wide of the goal

Man of the Match: Lewis Morgan helped ice the win for the New York Red Bulls and also delivered a strong performance overall. Morgan won all three of his tackle attempts, made two key passes (match-high), and completed one dribble to go along with his penalty kick goal.

Moment of the Match: Cristian Casseres Jr’s finish three minutes into the half truly bent Orlando City’s back, putting the hosts in a bad situation for the remainder of the defeat.

Match to Forget: Rodrigo Schlegel has stepped into the Orlando City backline following Antonio Carlos’ injury, but the Argentine did not have a great day in the loss. His foul led to the penalty kick at the end of the second half and overall the 25-year-old was put under constant pressure by Red Bulls starting forward Ashley Fletcher.

Man of the Match: Although he did not score, Alan Velasco remained a threat in the FC Dallas attack. He won seven duels, completed two dribbles, and also registered two shots on goal.

Moment of the Match: Facundo Quignon came off the bench and delivered the winning goal, helping FC Dallas fight back to win the Texas Derby.

Match to Forget: Dynamo defenders Tim Parker and Ethan Bartlow failed to help Houston shut the door on a victory, watching as FC Dallas hit back to win at home.

Man of the Match: Julian Carranza continued his good run of form the Union, drawing a penalty kick, scoring from the spot, and helping Jim Curtin’s side earn one point.

Moment of the Match: Kamal Miller’s last-gasp header soared over the bar in stoppage time, condemning both teams to a share of the spoils.

Match to Forget: Daniel Gazdag was quiet in the Union midfield, losing eight duels, and failing to register a shot on goal

Man of the Match: Emanuel Reynoso got the party started for Minnesota United by scoring the winning goal and also added an assist on the second. Reynoso remains one of the top playmakers in MLS and showed that on Saturday.

Moment of the Match: Reynoso’s goal truly set Minnesota United on its way before the Fire were reduced to 10 men. Arriaga’s header off a corner kick killed any chance of a comeback for the visitors.

Match to Forget: Gabriel Slonina made zero saves and failed to help in the dying moments of the match as Minnesota United claimed a lead and did not look back.

Man of the Match: Greek forward Taxiarchis Fountas offered D.C. United some joy on the heels of Hernan Losada’s firing, scoring twice to lead the team to a home win.

Moment of the Match: Taxiarchis Fountas caught the ball beautifully on the volley in the 26th minute for his first goal of the game.

Match to Forget: Brad Knighton had a rough night in goal. Fountas’ second goal hit Knighton’s hands before going in the back of the net. He was beaten on Fountas’ first goal badly, too.

Man of the Match: Maxi Urruti continued his hot streak in 2022, scoring two goals in the first half to put Austin FC in control.

Moment of the Match: Maxi Urruti put Austin in front right off the bat. He rocketed a shot into the back of the net in the 11th minute for his fourth goal of the season.

Match to Forget: Cristian Dajome missed a golden opportunity in the 46th minute. Dajome sent a shot just over the crossbar, letting a chance to pile pressure onto Austin early in the half go begging.

Moment of the Match: Sporting KC midfielder Remi Walter seemed to be taken down in the box by Pedro Santos in the 42nd minute, but the referee Fotis Bazakos did not call a penalty or review the play.

Match to Forget: The Crew’s Derrick Etienne failed to make the most of nine shots from his team. The Crew couldn’t forge much going into the final third in this match, continuing a putrid trend.

Man of the Match: William Yarbrough made five saves as the Rapids stopped a strong Charlotte FC attack to earn a point on a rough night for all of the Rapids’ attacking players.

Moment of the Match: McKinze Gaines found some space in a foot race with Lalas Abubakar in the 91st minute, launching a shot for one of the Charlotte’s best chances. However, Yarbrough came up with another big save.

Match to Forget: Rapids forward Diego Rubio played the full 90, but managed only two shots. The Rapids failed to generate a single shot on goal.

Man of the Match: Real Salt Lake goalkeeper Zac MacMath came up with five saves. MacMatch fended off a number of long-range efforts from the Timbers, preventing rebound opportunities.

Moment of the Match: Real Salt Lake had the best chance of the game in the 66th minute, when Sergio Cordova hit the post.

Match to Forget: Bobby Wood continued a poor run of form. Wood played 80 minutes and failed to find a shot.

Man of the Match: The Earthquakes’ Cristian Espinoza stepped up big-time, scoring a hat trick and earning a last-gasp win by scoring a penalty kick.

Moment of the Match: Referee Ted Unkel called a penalty kick on a shove during a corner kick as the game went into stoppage time. That set up Espinoza to complete his hat trick and secure an improbable comeback win.

Match to Forget: Stefan Frei made a major mistake on the Quakes’ second goal, allowing the ball to slip right by his hands. The goal counted for Espinoza in the 64th minute, but clearly could have been saved by Frei and ceded momentum to the home team.

Man of the Match: Dejan Joveljic stole the show in the 86th minute, scoring the winning goal. Joveljic made an instant impact since coming on as a sub in the 77th minute.

Moment of the Match: Dejan Joveljic, a 21-year-old Serbian striker, scored the match winner for his first goal of the season. Joveljic had previously entered in five games this season as a substitute.

Match to Forget: Hany Mukhtar struggled to get anything going for Nashville, leading to the club finishing this match with only one shot on goal. Mukhtar didn’t have a single shot and completed 76% of his passes.