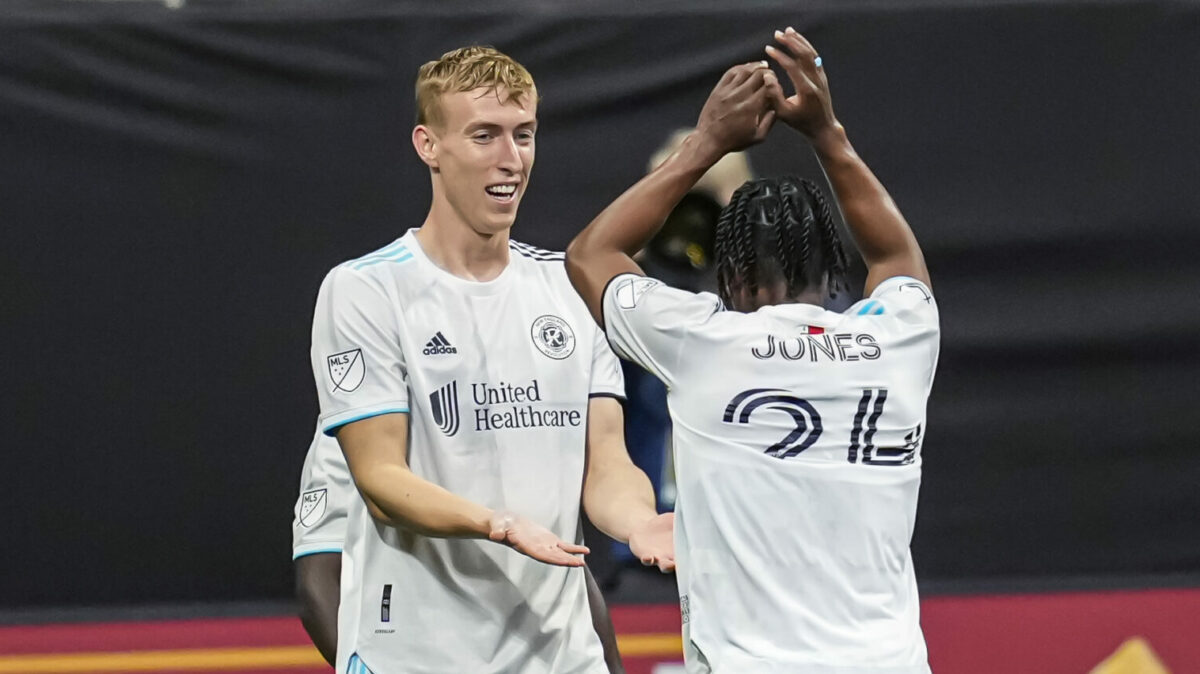 The weekend was filled with incredible goals, with Valentin Castellanos scoring a beautiful chipped finish, Atlanta United’s Thiago Almada scoring in traffic from just outside the box with a powerful strike and another impressive Sunday goal from Cristian Roldan.

Some impressive team performances also highlighted the week, with CF Montreal taking the lead in the Eastern Conference with a 2-0 win in Charlotte. New York City FC stayed unbeaten at Yankee Stadium with a dominant showing over the Crew. FC Dallas went on the road to take a commanding win over the LA Galaxy.

Here are the highlights from Week 11 in MLS.

The Colorado Rapids had one of the craziest weeks imaginable. The team played only 18 minutes of a U.S. Open Cup Round of 32 game Wednesday, before a weather delay pushed the game back to Thursday afternoon. The Rapids lost to Minnesota United, 2-1, and arrived back in Colorado Friday morning with little time to prepare for Saturday afternoon’s showdown with Los Angeles FC.

Robin Fraser’s side showed its sharp winning mentality and toughness to shock LAFC and convert two penalty kicks for a 2-0 win at Dick’s Sporting Goods Park. Gyasi Zardes converted a penalty kick early in the game, and Diego Rubio added another penalty-kick goal later in the first half. Fraser said after the game, “I am so f—ing proud of this team,” after the Rapids faced so much adversity earlier in the week.

The Rapids ceded 61.7% of possession to LAFC, but stayed efficient offensively, with six shots on goal from 14 total shots. LAFC managed only two shots on goal as Rapids centerback Auston Trusty won five duels and made on tackle.

Honorable mention for Team of the Week goes to FC Dallas, which had no issues defeating the LA Galaxy 3-1 away from home. The Portland Timbers also surprised everyone, knocking in seven goals against Sporting KC in a 7-2 win. New signing Nathan Fogaca impressed with two goals, and Giovanni Savarese’s team seems to be turning a corner after a lackluster start.

The New England Revolution are starting to pick up in form, though there is a long way to go to meet expectations. The biggest recent revelation is Adam Buksa, who has now scored six goals in his last five games. Buksa added two goals Sunday in a 2-2 draw with Atlanta United, including this strike from a tight angle after collecting a slick cross from Sebastian Lletget.

Buksa scored in the 30th and 55th minutes to help the Revs take a point at Mercedes-Benz Stadium.

Rumors have swirled about Buksa making a European move in the summer, with Bruce Arena revealing in preseason that a move is likely. Buksa’s play is backing up the interest now.

Honorable mention for Player of the Week in Week 11 goes to Jesus Ferreira, who scored two more goals and leads the Golden Boot race with nine goals. Cristian Roldan is another top performer, with an outstanding long-range goal and a drawn penalty in the Sounders’ 3-1 win over Minnesota United.

Real Salt Lake stayed unbeaten at home, even against Austin FC, which is still third in the Western Conference. In the 88th minute, Andrew Brody produced an incredible strike from about 22 yards away. A cross from Anderson Julio trickled out of the box, and Brody rushed onto it for the shot before an on-running defender could reach him.

Brody capped a big week for him individually, having just signed a new contract through 2024. The 27-year-old right back has made 11 starts for RSL this season, and Saturday’s goal was the first in his career.

Honorable mention for Goal of the Week goes to a beautiful chipped goal by Valentin Castellanos and a difficult strike across his body by Cristian Roldan to give the Sounders the lead Sunday against Minnesota United.