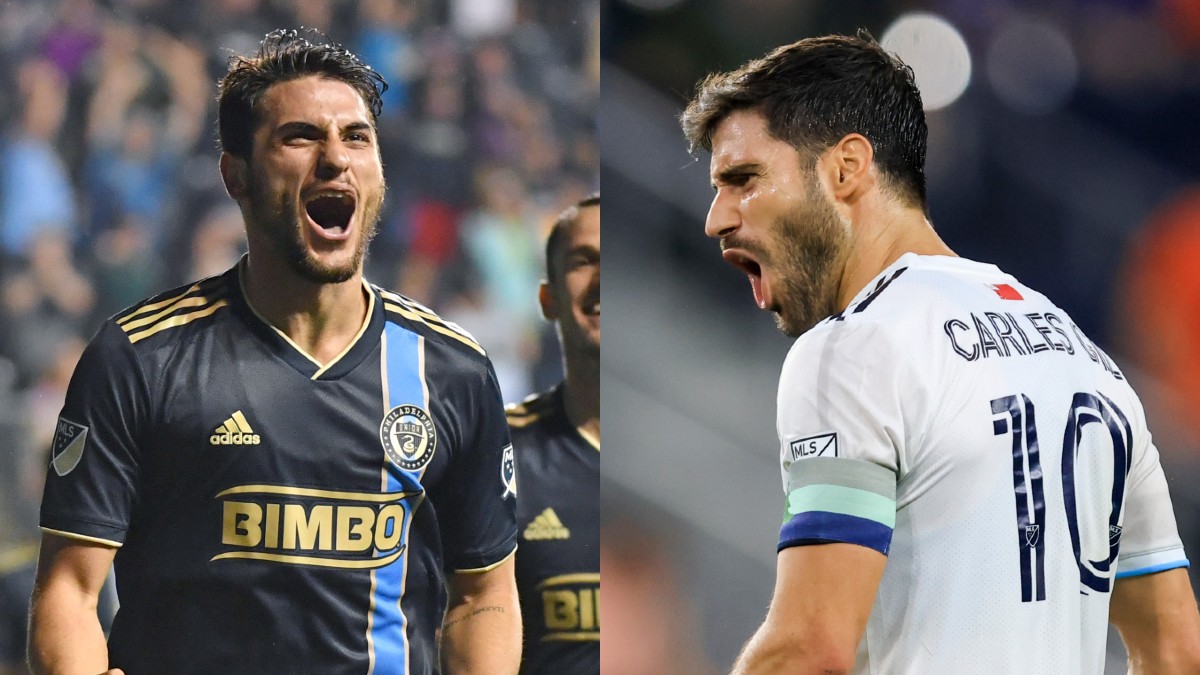 The New England Revolution are still working to climb out of the early-season hole they dug for themselves after navigating the Concacaf Champions League, and the quest to climb back into playoff position will be made even tougher this week by a visit from the East-leading Philadelphia Union.

The Revs are currently sitting in ninth place in the East, but Bruce Arena’s men are fully expected to find their groove and climb back toward the top of the table, but the Union have other plans, and Jim Curtin’s men know points are crucial if they are going to stay ahead of New York City at the top of the East standings.

In the Western Conference, FC Dallas is looking to recover its form after two confusing losses on the heels of what seemed like a statement win in Los Angeles over the Galaxy just 12 days ago. The Galaxy, on the other hand, have a golden opportunity to climb back into the race at the top of the Western Conference by hosting Austin FC.

Hany Mukhtar and CJ Sapong are emerging as an effective attacking partnership for Nashville SC. They come into Dick’s Sporting Goods Park, where the Rapids have dropped only four points in 13 games, this week.

Here are the top matches to watch in Week 13.

Revolution striker Adam Buksa is one of the hottest players in the league now, with seven goals in his last six league games. On the Union’s side, Daniel Gazdag has stayed in form from the first game of the season, with three goals and one assist in his past five games.

The centerback pairing of Jakob Glesnes and Jack Elliott will provide a challenge for the Revs, which boast attackers such as Buksa, Carles Gil and Sebastian Lletget, who scored SBI’s Goal of the Week last week. The Revs scored three goals to beat a defensively strong team in FC Cincinnati last weekend.

Union DP forward Mikael Uhre has been injured since he scored his first goal in a Union shirt at the beginning of May, but Sergio Santos and Julian Carranza have filled in adequately. The Union’s back line will have its work cut out against a Revolution attack that seems to be clicking in many facets. The Union has drawn five of its last six MLS games.

Nico Estevez has seemed like the top first-year coach in MLS so far in 2022, but his FC Dallas team has hit a screeching halt in form with losses in the past two games against Minnesota United and the Whitecaps. Orlando City, on a four-game unbeaten streak, presents a difficult challenge for FC Dallas to get back on track as Orlando coach Oscar Pareja faces his former club.

It’s difficult to prescribe what happened to FC Dallas in consecutive losses, first in Vancouver and then at home to the Loons, especially on the heels of a thoroughly impressive road 3-1 win over the Galaxy. Both clubs have a chance to be at or very near the top of their conference with a win.

Orlando City is starting to hit its stride, especially at Exploria Stadium. The Lions have won three of their last four home MLS games. Pareja did, however, playing a full-strength lineup for 120 minutes in Wednesday’s Open Cup Round of 16 win in penalties over Inter Miami, so some rotation might be expected.

Both teams have seen mixed results in recent weeks, with Austin FC bizarrely dropping points at home to a shorthanded Orlando City team last weekend. The Galaxy’s Javier “Chicharito” Hernandez finally broke a scoring drought in Wednesday’s U.S. Open Cup win over LAFC, so the Galaxy may just carry some momentum into this matchup.

The Galaxy claimed a win over Austin FC on May 8, thanks to a long-range goal from Mark Delgado. That game was only the second time Austin FC has been shut out in 2022. If the Galaxy can get the best of Austin in another game, it will get back into cream of the Western Conference.

Real Salt Lake is steadily climbing up the table in the Western Conference, while the Dynamo come into this clash off an eyebrow-raising 3-0 win over the LA Galaxy. DP striker Sebastian Ferreira is proving to have been an excellent signing by the Dynamo, with a goal and two assists in his previous start.

RSL counters the Dynamo’s attacking strength with two fullbacks who have been standouts in 2022 in Aaron Herrera and Andrew Brody. RSL is most dangerous on the wings, with Maikel Chang, Anderson Julio or Sergio Cordova leading the attack.

Nashville SC’s attack is picking up steam, with CJ Sapong scoring once and assisting twice in the past week and Hany Mukhtar scoring in each of his last two games. The Rapids are one of the best homes sides in the league, having only dropped points twice at home in 2022.

A tough 1-0 win over the Sounders last weekend showed the Rapids have the power to hang with just about anyone in the Western Conference. The Rapids’ back line of Auston Trusty, Lalas Abubakar and Keegan Rosenberry will be much tougher to break through than Nashville SC’s previous two opponents.