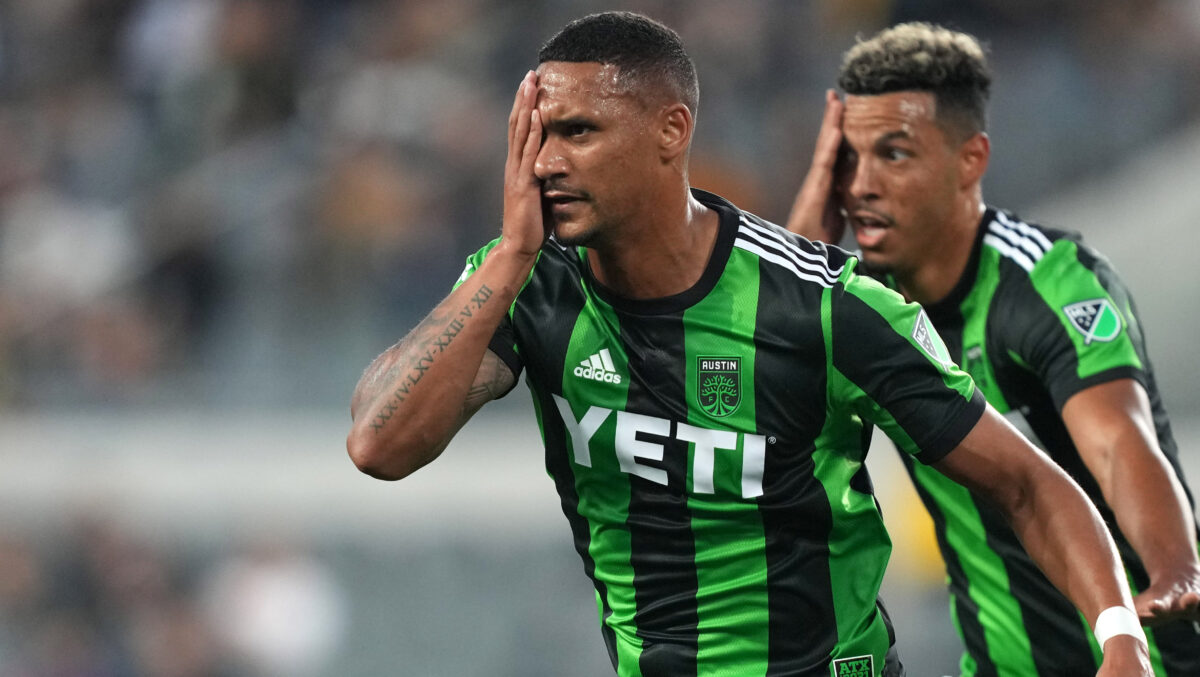 A 10-match midweek slate of MLS action shook up the Western Conference with Austin FC picking up three points on the road at LAFC and FC Dallas missing the chance to go top of the conference table.

Josh Wolff’s side defeated LAFC 2-1 away from home, using goals from Ruben Gabrielsen and Diego Fagundez to move top of the table. Despite conceding a late penalty kick goal to Carlos Vela, Austin FC snapped a two-match losing streak and picked up a statement win in one of MLS’ hostile atmospheres.

FC Dallas suffered a disappointing defeat on Wednesday, conceding two second-half goals in a 2-1 defeat to the Vancouver Whitecaps. Paul Arriola continued his strong season for Nico Estevez’s side by scoring his fourth goal of the season, but Brian White and Lucas Cavallini scored 21 minutes apart to help the Whitecaps extend their unbeaten run to four matches.

Jamiro Monteiro played the hero for the San Jose Earthquakes as Alex Covelo’s side defeated visiting Portland Timbers 3-2 at PayPal Park. Monteiro netted two goals, including the winner in the 80th minute as the Quakes extended their unbeaten run to four matches in all competitions. Portland has lost three of its last five matches in all comps.

Nashville SC claimed its third win out of its past four matches in all competitions, defeating CF Montreal 2-1 at Geodis Park. Alex Muyl and Hany Mukhtar both netted goals for Gary Smith’s side, helping the hosts move up to sixth place in the Western Conference. Despite Kei Kamara’s best efforts to start a comeback rally, CF Montreal watched its ninth-match unbeaten run snapped.

The New York Red Bulls played out a 3-3 home draw with the Chicago Fire thanks to Patryk Klimala’s 91st minute equalizer. Despite conceding a late strike to Xherdan Shaqiri, the Red Bulls grinded their way to one point at home. Cameron Harper scored his first MLS goal for the Red Bulls while Chris Mueller netted his first goal for the Fire since his return to the league.

Elsewhere, the Philadelphia Union played out a lackluster home draw with Inter Miami while the Seattle Sounders used a first-half winner from Raul Ruidiaz to defeat the Houston Dynamo.

Here is a closer look at Wednesday’s MLS results:

Man of the Match: Alexander Callens scored the winning goal for NYCFC at Audi Field and also delivered a strong defensive performance in the shutout win. Callens won three of five duels, made four clearances, and seven recoveries as NYCFC extended its unbeaten run to six matches in league play.

Man of the Match: Omir Fernandez was sensational for the New York Red Bulls, registering two assists, creating the most chances in the match (3), and tracking back to help out defensively for his 90 minutes.

Moment of the Match: Just when the Chicago Fire thought they would snap their winless run, Patryk Klimala struck in second-half stoppage time to steal one point for the Red Bulls at home.

Match to Forget: Gabriel Slonina didn’t enjoy a great performance in the 3-3 draw, failing to get to Lewis Morgan’s first-half penalty kick while also being caught out of position for Klimala’s late equalizer.

Man of the Match: Drake Callender delivered an eight-save shutout for Inter Miami, helping Phil Neville’s side steal one point on the road at Subaru Park.

Moment of the Match: Daniel Gazdag had the best chance for the Union in the final minutes in Chester, but his low drive missed the left corner from close range. It truly summed up the Union’s luck in front of goal.

Match to Forget: Leon Flach played only 64 minutes in the draw, but received one yellow card and didn’t offer much for the Union going upfield.

Man of the Match: D.J. Taylor delivered one of his best performance of 2022, assisting on Robin Lod’s equalizer, and also being strong defensively against the Galaxy’s attacking unit.

Match to Forget: It was a quiet night for Chicharito, who failed to register a shot on goal, or offer much in distribution in the final third.

Man of the Match: Raul Ruidiaz played the hero for the Seattle Sounders, scoring the lone goal of the match and almost coming close to walking away with two tallies on the night.

Moment of the Match: Ruidiaz’s goal was one of the main highlights from the match as the Peruvian international continued to deliver for Brian Schmetzer’s attack.

Match to Forget: Adalberto Carrasquilla and Alex Roldan both fall into this category after being sent off in the second half for their respective teams.

Man of the Match: Hany Mukhtar powered Nashville’s attack, scoring a well-worked goal. Mukhtar had three shots with two on goal, one key pass and won a tackle.

Moment of the Match: Alex Muyl scored an outstanding goal in the 13th minute, receiving a long ball from Nashville goalkeeper Joe Willis. Muyl dribbling along the edge of the box and sent a perfect shot into the top left corner.

Match to Forget: Winger Lassi Lappalainen was subbed out at halftime after making little impact in the attack for CF Montreal.

Man of the Match: Daniel Salloi scored twice to end a run of seven winless matches for Sporting KC. Salloi scored with short-range finishes and showed off the threat he can contribute from the right side.

Moment of the Match: Salloi slid past Lalas Abubakar with a nice dribbling move to score his first goal in the 24th minute.

Match to Forget: The match had an ugly finish, with two players on either team being sent off. Andreu Fontas is the biggest loser in that incident, as his absence in Sporting KC’s next game leaves the team in an even bigger lurch at the back.

Man of the Match: Brian White made a meaningful impact, coming on as a sub in the 59th minute. White scored the Whitecaps’ first goal with a near-post header, which invited his teammates to continue pushing for a result.

Moment of the Match: The Whitecaps completed the comeback with Lucas Cavallini’s converted penalty in the second minute of second-half stoppage time.

Match to Forget: FC Dallas goalkeeper Jimmy Maurer kept the ball in play in front of goal to allow the Whitecaps one last scoring chance. That chance materialized when Edwin Cerrillo committed a foul on Ranko Veselinovic for a penalty kick.

Man of the Match: Ruben Gabrielsen continues to show why he’s one of the smartest signings Austin FC made over the offseason. Gabrielsen helped Austin fend off 18 shots from LAFC and scored the opening goal.

Moment of the Match: LAFC nearly had its chance to earn a late result, when Austin FC centerback Kipp Keller made a tackle in the box that seemed rough. A VAR review ruled no penalty, and it was a very tough call to make.

Match to Forget: LAFC centerback Mamadou Fall found himself in no man’s land on Austin FC’s second goal. With the opponent next to him drawn offside, Fall could have stepped to Fagundez to prevent the shot.

Man of the Match: Jamiro Monteiro led the attack for San Jose, scoring in key moments. Once, on a breakaway and again by punching in a loose ball for an easy finish.

Moment of the Match: Jamiro Monteiro jumped on a loose ball right in front of goal in the 80th minute, stretching an unbeaten Quakes run to three games.

Match to Forget: Timbers central midfield linchpin Diego Chara couldn’t put his mark on this game, and he left after 79 minutes. Chara was only involved in eight duels and made one tackle.