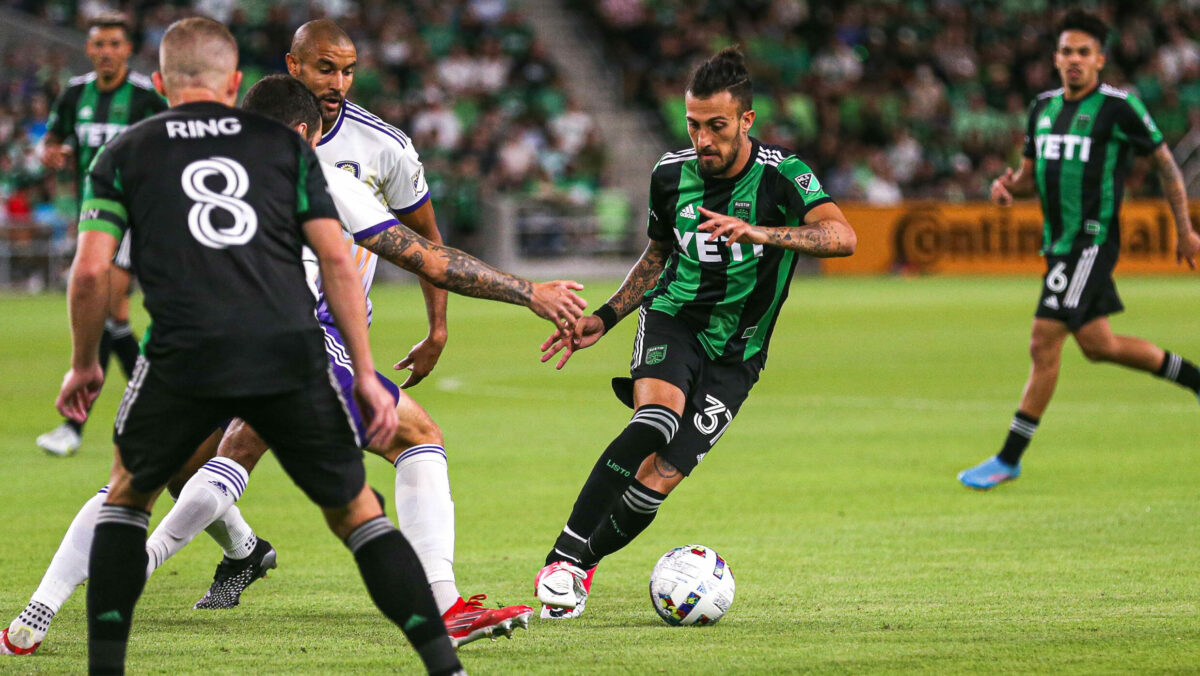 Week 12 in MLS brought spectacular goals from the Union’s Daniel Gazdag and the Dynamo’s Tyler Pasher. The Dynamo were one surprise of the weekend, with a 3-0 takedown of the Los Angeles Galaxy. DP striker Sebastian Ferreira is one of the weekend’s top performer’s with one goal and two assists.

Elsewhere, Minnesota United stunned FC Dallas in Frisco with a brilliant showing from Emanuel Reynoso and a beautiful goal from DJ Taylor. Paul Arriola’s rocket from long range was not enough to save any points for Dallas.

In the Eastern Conference, New York City FC keeps winning, this time earning a narrow win over the Fire thanks to a penalty kick. The Red Bulls’ trip to Miami ended in their first road loss of the season to Inter Miami, who benefitted from goals from Ariel Lassiter and Robert Taylor.

Saturday’s matches were heavily affected by weather delays. However, when the rain and thunder settled, LAFC triumphed over the Crew, Atlanta United earned a point against Nashville SC, D.C. United was held to a point at home by Toronto FC and the Revolution scored a thrilling 3-2 win over FC Cincinnati.

Here is a look back at Saturday’s MLS action:

Man of the Match: Sergio Cordova scored the decisive goal and powered RSL’s attack, with two of the team’s four shots on goal.

Moment of the Match: Cordova made the difference in a tightly contested match, notching the winning goal in the 66th minute.

Match to Forget: CF Montreal right wingback Lassi Lappalainen could not keep up with Sergio Cordova after a long pass forward for RSL’s second goal.

Man of the Match: Charlotte FC’s attack ran through Jordy Alcivar. Though Alcivar didn’t register an assist, he contributed greatly to the team’s 18 shots in this game with three key passes.

Moment of the Match: Daniel Rios made an immediate impact after coming on as a substitute. Three minutes after he entered, he knocked in the winning goal from short range.

Match to Forget: Ranko Veselinovic let the ball come all the way across his body on Daniel Rios’ 85th-minute goal to win it for Charlotte FC.

Man of the Match: Alfredo Morales locked things down in the defensive midfield, winning eight duels and completing 94.5% of his passes. The Fire were held to only on shot on goal.

Moment of the Match: A fairly clear penalty call gave NYCFC a golden opportunity to take the lead in the first half. Miguel Navarro’s outstretched arm touched the ball on a play at the back post off a corner kick.

Match to Forget: It was a tough afternoon for Brian Gutierrez, who was subbed off at halftime after a completely ineffective first half on the left wing.

Man of the Match: Drake Callender did an excellent job in goal, stopping some well-worked Red Bulls chances. The Red Bulls only had four shots on goal, but each one was a close-range chance or well-placed shot.

Moment of the Match: Ariel Lassiter fired Inter Miami into the lead with a powerful driven shot into the bottom right corner in the 29th minute.

Match to Forget: Red Bulls striker Patryk Klimala could have done better with the one shot he directed on goal, and struggled to break free in the final third.

Man of the Match: Emanuel Reynoso carried Minnesota United’s attack. He started the play on the Loons’ first goal with a powerful free kick. Reynoso also won 11 of 20 duels and put three shots on target.

Moment of the Match: DJ Taylor doubled the lead for the Loons in the 56th minute, cleaning up a long corner kick with a spectacular volley.

Match to Forget: Franco Jara stepped in to give Jesus Ferreira some rest, but Jara did not perform up to par. He directed only one of six shots on goal as FC Dallas failed to generate much in the attack.

Man of the Match: Sporting KC goalkeeper Tim Melia made four saves to preserve a point in a road match. Melia’s play was much needed, as Sporting KC’s attack managed only two shots on goal.

Match to Forget: Sporting KC centerback Robert Voloder was clearly out of position on Yueill’s header goal in the 46th minute. The lapse in positioning and the missed header made for one of the easiest goals Yueill will ever score.

Man of the Match: Austin FC saved one point from a bizarre and poor performance thanks to Moussa Djitte, who scored in the fifth minute of stoppage time off a corner kick. Austin FC struggled in many ways, and allowed Orlando seven shots on goal from 12 shots, despite 28.6% of possession.

Moment of the Match: A penalty kick call and red card in the 60th minute changed the complexion of the match. Orlando City defender Rodrigo Schlegel committed a handball off a free kick to give Austin the momentum it needed to score its first goal.

Match to Forget: Rodrigo Schlegel had a nightmare of a sequence from the 58th to 63rd minutes. Schlegel committed a handball on the edge of the box, then committed another handball in the box to receive a second yellow card and a penalty kick called against him.

Man of the Match: It was a solid game at the back for Keegan Rosenberry, who defended well against Cristian Roldan and Raul Ruidiaz and completed 88% of his passes.

Moment of the Match: Jonathan Lewis was gifted a game-winning goal, as a cross from Diego Rubio was redirected toward goal, and Lewis barely tapped it in to claim credit in the 50th minute.

Match to Forget: Sounders centerback Yeimar will want to forget about the play on the game’s only goal, in which he deflected the ball back toward Jonathan Lewis for an easy tap-in.

Man of the Match: Sebastian Ferreira made all three goals happen, scoring one himself and assisting two others. Ferreira’s goal came in the 11th minute, in which he collected a rebounded save and thwarted a defender before an easy finish.

Moment of the Match: Tyler Pasher, who came on as a substitute, scored a rocket in the 58th minute. Pasher evaded two defenders and found some space before firing into the top left corner.

Match to Forget: Galaxy centerback Derrick Williams struggled to keep up with Thorleif Ulfarsson in the 62nd minute, as Ulfarsson thoroughly beat him with a double stepover and put the game well out of reach.

Man of the Match: Sergio Santos made 52 minutes of action count, with three key passes and two shots, including a header to bring the Union’s advantage to two goals.

Moment of the Match: Daniel Gazdag scored his third goal in his last six games with an acrobatic overhead kick in the fifth minute.

Match to Forget: Timbers midfielder Santiago Moreno struggled to close down on Kai Wagner as Wagner whipped in the cross to assist Sergio Santos’ 48th-minute goal.

Man of the Match: Carlos Vela played up to his high standard, jumpstarting the LAFC attack and scoring to put the team up after a long weather delay. Vela also had two key passes.

Moment of the Match: The Crew appeared to take a 1-0 lead in the 58th minute on a would-be goal from Yaw Yeboah, but VAR ruled Yeboah offside on the build-up.

Match to Forget: The normally dependable Darlington Nagbe endured his worst match of the season, committing errors that led directly to both LAFC goals.

Man of the Match: Brandon Bye assisted all three goals from the right-back spot. Not something you see every day.

Moment of the Match: Tommy McNamara’s game-winner in the 89th minute stole the points on the road and gave the Revs their first MLS win since April 30.

Match to Forget: John Nelson registered an assist on the day, but was torched on multiple occasions by Bye, including on the sequence leading to the winning goal.

Man of the Match: D.C. United didn’t earn all three points at home, but Michael Estrada carried the attack, completing a driven cross for the first goal and chasing down the ball just in front of the goal line for the second goal.

Moment of the Match: Jonathan Osorio earned the point for TFC after a strong attacking showing. Osorio jumped on a rebounded save in the 89th minute to score.

Match to Forget: Tony Alfaro struggled at the back for D.C. United. He won only one of 12 duels and committed a poor turnover to lead to TFC’s first goal.

Man of the Match: 21-year-old Argentine winger Thiago Almada found himself in the right spot in the first half to deliver Atlanta United’s first goal. Then, he sent a beautiful ball over the top to start the play for the late equalizer.

Moment of the Match: Dom Dwyer punched in Atlanta’s answer in the 88th minute, bringing the Five Stripes a point to complete a strong performance away from home.

Match to Forget: A lapse in the first half by Joe Willis leaves Nashville wishing for more from this game. Willis misplaced a pass straight into the path of Ronaldo Cisneros to gift Atlanta a goal in the 27th minute.