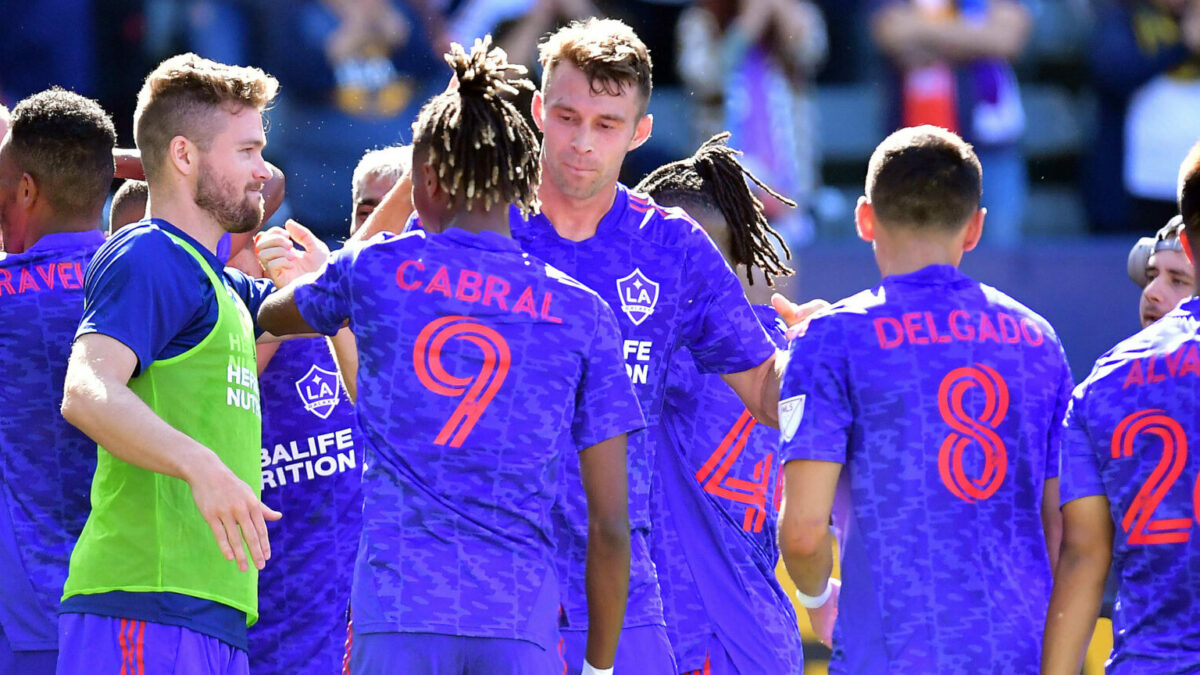 The L.A. Galaxy overcome a one-goal deficit to roll past Austin FC in the second-half at Dignity Health Sports Park, claiming back-to-back wins in all competitions.

Greg Vanney’s side scored four goals in the final 29 minutes of Sunday’s Western Conference showdown to earn a 4-1 result. Dejan Joveljic scored twice off of the bench for the Galaxy, while Chicharito and Efrain Alvarez also found the back of the net in the triumph.

The home victory now moves the Galaxy one point back of Austin FC for fourth place in the West.

FC Dallas was staring a third-consecutive defeat in the face on Saturday night in Orlando, but delivered a strong second-half performance to claim three points against the host Lions.

Paul Arriola continued his impressive goalscoring run for Nico Estevez’s squad while Franco Jara also found the back of the net in a 3-1 victory over Orlando City. The win snapped a two-match losing streak and kept FC Dallas near the top of the Western Conference standings.

Despite conceding a first-half goal to Ercan Kara, FC Dallas scored three goals in a 17-minute span to flip momentum in its favor. Arriola equalized in the 67th minute to extend his goalscoring streak to five-straight matches with a tally before Franco Jara’s clever finish boosted the visitors in front 2-1.

Arriola capped the comeback win in style by netting his seventh goal of the league season with only six minutes left to play.

FC Dallas sits four points back of conference-leaders LAFC while Orlando City dropped to fifth place in the East.

In a thrilling five-goal affair, LAFC claimed three points at home in a 3-2 win over the San Jose Earthquakes. Jeremy Ebobisse scored twice for the visiting Quakes at Banc of California Stadium, but Brian Rodriguez’s goal in the 47th minute ended up being the winning strike.

Two of the top Eastern Conference teams met at Gillette Stadium with the Philadelphia Union fighting back to tie the New England Revolution 1-1 in Foxborough. Carles Gil’s penalty-kick goal was cancelled out by Mikael Uhre’s equalizer just one minute after the Austrian forward stepped on as a substitute.

Man of the Match: Dejan Joveljic was a major spark for the Galaxy, scoring two goals and adding two assists off of the bench. The Serbian international has been fighting for starts this season and now might’ve just earned him a few more heading into the June schedule.

Moment of the Match: Joveljic’s introduction helped turn things around for the Galaxy, setting up Chicharito’s equalizer in the 61st minute before calling his own number just three minutes later for the eventual winner.

Match to Forget: Zan Kolmanic had a forgettable afternoon for Austin FC, conceding one penalty kick and also making an error on one of the Galaxy’s goals.

Man of the Match: Yeimar Gomez was solid in the back for the Sounders, winning six of his seven duels, making eight interceptions, and winning both of his tackle attempts.

Moment of the Match: Raul Ruidiaz completed the comeback for the Sounders just eight minutes after Jordan Morris equalized for the hosts.

Match to Forget: It wasn’t Andre Shinyshiki’s night for Charlotte FC’s attack, as the forward lost five of his six duels and failed to deliver much in the final third.

Man of the Match: Brian Rodriguez scored the winning goal for LAFC and also assisted once in a strong performance from the energetic forward. Rodriguez won eight duels, completed five dribbles, and registered four shots on goal.

Moment of the Match: Rodriguez’s goal early in the second half sprung LAFC into the lead and ultimately was the winning goal in an important home result.

Match to Forget: Jan Gregus conceded the penalty kick opportunity on LAFC’s first goal and was quiet in the attacking third, failing to set up his teammates for offensive opportunities.

Man of the Match: Jonathan Mensah was Man of the Match on both sides of the field, scoring his first goal of the season and also dominating defensively against a dynamic Five Stripes attack.

Moment of the Match: With the Five Stripes pushing for an equalizer, Alex De John’s last-gasp header was saved by Eloy Room.

Match to Forget: Thiago Almada’s frustration boiled over in stoppage time as the attacking player was sent off for a red card offense.

Moment of the Match: Lewis Morgan’s stellar strike in the second-half truly sucked the wind out of the D.C. United players.

Match to Forget: Bill Hamid did not have a memorable night in goal, conceding four goals and being put under countless pressure from the host Red Bulls.

Man of the Match: Toronto FC has needed more from Alejandro Pozuelo this season and the Spaniard led the way with two goals in a home win.

Moment of the Match: Pozuelo’s two goals in a seven-minute span boosted TFC into the lead and eventually was the difference in the final scoreline.

Match to Forget: Federico Navarro conceded the penalty which led to Pozuelo’s first goal of the match, putting the Fire against the wall for the final minutes.

Man of the Match: Djordje Mihailovic’s early exit forced Romell Quioto to step up and the Honduran sure did, scoring twice in a 4-3 home victory.

Moment of the Match: Brandon Vazquez had two golden chances to tie things up late for FC Cincinnati, but watched his last-gasp header blocked in the box.

Match to Forget: Nick Hagglund conceded one penalty kick chance and ultimately struggled to deal with Quioto’s pace and skill for 84 minutes.

Man of the Match: Carles Gil did everything he could to help the Revolution walk away with one point on Saturday night. Gil created a match-high six chances, completed four dribbles, completed the most passes (60), and drew five fouls.

Moment of the Match: Mikael Uhre was an impact substitute for Jim Curtin’s squad, coming off of the bench and scoring just one minute later to give the Union a draw.

Match to Forget: Jack Elliott is normally strong defensively, but on Saturday the English defender was at fault for conceding a penalty kick in a match that could’ve been three points for the Union.

Man of the Match: Paul Arriola continued to answer his critics with a two-goal performance, adding to his strong campaign for FC Dallas in his first season with the club.

Moment of the Match: Franco Jara’s goal proved to be the difference, swinging FC Dallas in front for good.

Match to Forget: Pedro Gallese made one error which led to an FC Dallas goal, normally something we don’t see from the Peruvian international.

Man of the Match: Robert Taylor came off of the bench and delivered the winner for Inter Miami, contributing a strong 45 minutes for Phil Neville’s side.

Moment of the Match: Cristhian Paredes came close to helping the Timbers steal a draw at DRV PNK Stadium, but his 90th minute effort struck the post.

Match to Forget: Dairon Asprilla was held in check by the Inter Miami defense as the Colombian failed to register a shot on goal in the loss.

Man of the Match: Alexander Callens played the hero with the winning goal for NYCFC while also shutting down plenty on the defensive end. Callens won eight of 13 duels, made six clearances, four interceptions, and four recoveries.

Moment of the Match: Sean Johnson finished the match with four saves for NYCFC, but none were more important than his two in the 90th minute to preserve the shutout win.

Match to Forget: Wil Trapp lost the most duels in the match (9) and was left frustrated for most of the night against the pesky NYCFC attacking unit.

Man of the Match: Hany Mukhtar scored twice for Gary Smith’s side in Colorado, continuing another push for an MVP award this season.

Moment of the Match: Mukhtar’s second goal of the opening 20 minutes truly put the hosts in major trouble with most of the match still left to play.

Match to Forget: The entire Rapids backline failed to deal with the in-form duo of Sapong and Mukhtar, being left to ponder what if after conceding three goals at home.

Man of the Match: Lucas Cavallini’s goal was the difference and the Canadian was also a handful for SKC to deal with. Cavallini won 13 of 26 duels and drew four fouls, doing a lot of dirty work in the offensive side of the field.

Moment of the Match: SKC pushed for an equalizer late in the match, but were unable to truly test Cody Cropper in goal.

Match to Forget: Uri Rosell conceded the penalty kick opportunity in the first half before being replaced at halftime with SKC fighting for a tying goal.

Man of the Match: Justen Glad not only got to celebrate a goal in stoppage time, but he also led the way for Real Salt Lake to earn a clean sheet at home.

Moment of the Match: Cordova’s third league goal of the season was the backbreaker for the Dynamo.

Match to Forget: It was a poor night overall for the Dynamo defenders, but veteran Tim Parker will feel some blame as the leader of the bunch.