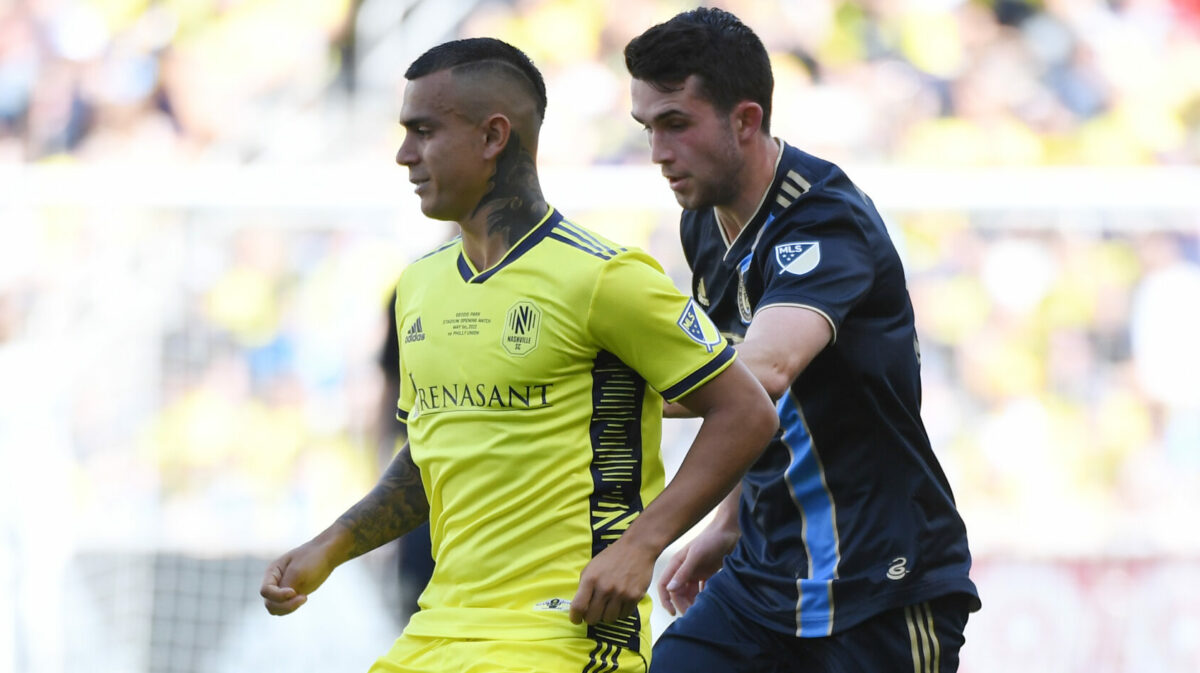 Nashville SC opened GEODIS Park to 30,000 fans on Sunday afternoon and fought back to claim a first-ever point at its new stadium.

Randall Leal’s penalty kick equalizer helped Gary Smith’s side claim a 1-1 draw against the visiting Philadelphia Union. Mikael Uhre’s first MLS goal looked to have propelled Jim Curtin’s side in front for good, but Jose Martinez’s hand ball in the box forced Chris Penso to point to the penalty spot.

Andre Blake made five saves for the Union while Nashville SC also struck the post once and crossbar once.

New York City FC cruised to a third-consecutive victory, rolling in the second-half to down the San Jose Earthquakes 3-0 at Yankee Stadium. Keaton Parks, Gabriel Pereira, and Chris Gloster all scored goals as NYCFC moved up to fifth place in the Eastern Conference.

The New York Red Bulls looked like they were on their way to their first road defeat of the season as they trailed the Chicago Fire in the second half, but a late rally by Gerhard Struber’s men helped the Red Bulls keep their well-earned label of road warriors.

A pair of goals from second-half substitute Patryk Klimala, including a 91st-minute penalty winner helped the Red Bulls earn a 2-1 victory over the Fire at Soldier Field. The victory improved the Red Bulls road record to a perfect 5-0.

Austin FC was another team that pulled off a second-half comeback on Saturday, rebounding from a fifth-minute goal by the Houston Dynamo on the way to a 2-1 victory at BBVA Compass Stadium. Sebastian Driussi’s beautiful finish in the 66th minute helped Austin FC leapfrog LAFC into first place in the Western Conference.

The Colorado Rapids snapped a five-match winless run on Saturday defeating the Portland Timbers 2-0 at home. Diego Rubio and Mark-Anthony Kaye each contributed goals for the Rapids in what was their third shutout league victory of the new season.

Inter Miami’s winning run was snapped on Saturday after Phil Neville’s side fell 2-0 to the New England Revolution. Damian Rivera’s opening goal in the first minute put the visitors under early pressure before Adam Buksa doubled the hosts lead in the second half. Leonardo Campana’s injury will be a worrying sign for Neville going forward.

Here is a closer look at all of this weekend’s MLS results:

Man of the Match: Diego Palacios had a very productive 90 minutes on both sides of the field for the night. His composed defense led to five interceptions and eight recoveries that held off attacks from Danladi and others from the left. The assist to Cifuentes sealed the win at the 90th minute.

Moment of the Match: Ryan Hollingshead came off the bench and broke the deadlock with a volley that hit the bottom right corner of the net in the 83rd minute. The play was from a set piece opportunity where the fullback, without hesitation, struck the loose ball to finally beat St. Clair.

Match to Forget: Kwadwo Opoku’s match was cut short after missing a wide open chance in the 50th minute and getting in the way of Illie’s shot that was going for goal in the 56th minute just before getting replaced by a more effective Danny Musovski.

Man of the Match: Andre Blake made several key first-half saves to keep the Union in the match and earn one point on the road. Blake denied Hany Mukhtar and Alex Muyl on strong efforts in the box, while also receiving help from his post and crossbar at different stages of the match.

Moment of the Match: Jose Martinez was whistled for hand ball in the box after a Nashville SC corner kick. Andre Blake almost kept out Randall Leal’s spot kick, but was left angered after the goal as Gary Smith’s side claimed a first point at GEODIS Park.

Match to Forget: C.J. Sapong was ineffective in attack for Nashville SC, failing to register a shot on goal and losing half of his duels.

Man of the Match: Keaton Parks scored the winning goal for NYCFC and also led by example in midfield. Parks won six of eight duels, won two tackles, and completed 95% of his passes, helping NYCFC also keep a clean sheet.

Match to Forget: Francisco Calvo is the veteran of San Jose’s backline, but he was pushed around on Sunday. Calvo lost four of his seven duels and was caught out of position on numerous occasions in the second half as the match unwraveled for the Quakes.

Man of the Match: Sebastian Driussi played the hero for Austin FC on Saturday, scoring the winning goal in a comeback victory. Driussi, 26, has contributed seven goals in eight league appearances this season, being a deadly weapon in Austin FC’s midfield.

Moment of the Match: Austin FC started off slow in Houston, but Driussi’s top-shelf finish flipped momentum into the visitors favor in the second half.

Match to Forget: Griffin Dorsey was late in covering Driussi on the winning goal, being eventually being replaced as the Dynamo tried to salvage an equalizer.

Man of the Match: Junior Moreno was all over the field for FC Cincinnati, winning eight of 11 duels, three tackles, and making four interceptions from his defensive midfield position.

Moment of the Match: Ian Murphy isn’t known for his goalscoring ability, but the young defender delivered a confident finish to kick off the scoring at BMO Field.

Match to Forget: Shane O’Neill failed to deal with Luciano Acosta in the box for FC Cincinnati’s eventual second goal, a tally that ended up being the deciding factor in the scoreline.

Man of the Match: Marcelo Silva delivered the winning goal in for Real Salt Lake and also delivered a strong shift defensively against the Galaxy. Silva won all four of his duels, his lone tackle, and made seven clearances in the match.

Moment of the Match: Dejan Joveljic looked to have given the Galaxy a stoppage-time equalizer in the 92nd minute, but VAR struck and wiped the tally off due to a hand ball.

Match to Forget: Chicharito was silenced by the RSL defense, failing to register a shot on goal and only being held to 23 touches in the loss.

Man of the Match: Kamal Miller did everything he could to lead CF Montreal to a 2-1 home win. Miller scored the opening goal, set up the winning goal, and was sensational defensively. He won all four of his duels while also making 11 recoveries.

Moment of the Match: Joaquin Torres came off of the bench and struck to help CF Montreal edge Atlanta United at home. Torres’ 82nd minute go-ahead goal proved to be the difference between the two clubs.

Match to Forget: Luiz Araujo was poor for Atlanta United, losing seven of his eight duels, picking up one yellow card, and being dispossessed three times in midfield.

Man of the Match: Derrick Etienne scored his first goal since the third week of the season. He caused problems all night for D.C. United’s back line, with two shots and one key pass.

Moment of the Match: Darlington Nagbe uncorked a volley from just beyond the 18-yard box to finish off a looping clearance in the 75th minute. The goal made it 3-0 and will go down as one of the best goals this week.

Match to Forget: Julian Gressel found himself trailing the play on Etienne’s goal in the 43rd minute. Gressel had trouble keeping a hold on Etienne through most of the game.

Man of the Match: Adam Buksa led the Revs’ attack, with five shots, two on goal and a goal in the 64th minute. Buksa scored for the third game in a row.

Moment of the Match: Damian Rivera set the tone early for the Revs, scoring in the very first minute. Rivera, a Homegrown player, received the first start of his MLS career.

Match to Forget: Damion Lowe damaged Inter Miami’s chances at getting back into the game when he took down Adam Buksa in the 60th minute for his second yellow card. To make matters worse, Buksa scored a goal for insurance in the 64th minute.

Man of the Match: Ruan’s speed brought an element to the game that Charlotte FC could not contend with. Ruan scored the first goal of the game, then helped double the lead by outrunning defenders and dishing to Facundo Torres to score into an open goal.

Moment of the Match: Ruan’s run of nearly half the field before hitting Torres to score Orlando City’s second goal in the 45th minute put Orlando City into an advantage it held onto in the second half.

Match to Forget: Charlotte FC struggled to get anything going in the attacking third. Alan Franco completed only 68% of his passes, failed to record a shot and was subbed out in the 75th minute.

Man of the Match: Patryk Klimala secured all three points on the road as the Red Bulls came from behind late to win. Klimala scored both Red Bulls goals, with the match winner coming in stoppage time.

Moment of the Match: Patryk Klimala completed the comeback when he scored his second goal, a penalty kick which Klimala calmly converted.

Match to Forget: The Fire went down to nine men in the 83rd minute, when Rafael Czichos took down Luquinhas with a late sliding tackle. That mistake led the Red Bulls to complete the comeback minutes later.

Moment of the Match: Daniel Salloi saved a point for Sporting KC with an excellent turn and left-footed shot in the 77th minute.

Match to Forget: FC Dallas seemed to have been on their way to three points on the road, until Brandon Servania picked up his second yellow card for a tackle in the middle of the field with no clear threat on goal. Sporting KC equalized 10 minutes later.

Man of the Match: Mark-Anthony Kaye pulled the strings well for the Rapids, with three key passes. Kaye also had three shots and scored a late goal to seal the win.

Moment of the Match: Diego Rubio’s 30th-minute free kick froze Timbers goalkeeper Aljaz Ivacic to give the Rapids a 1-0 lead.

Match to Forget: Timbers forward Jaroslaw Niezgoda played all 90 minutes, but failed to take a shot as the Timbers’ attacked struggled greatly.