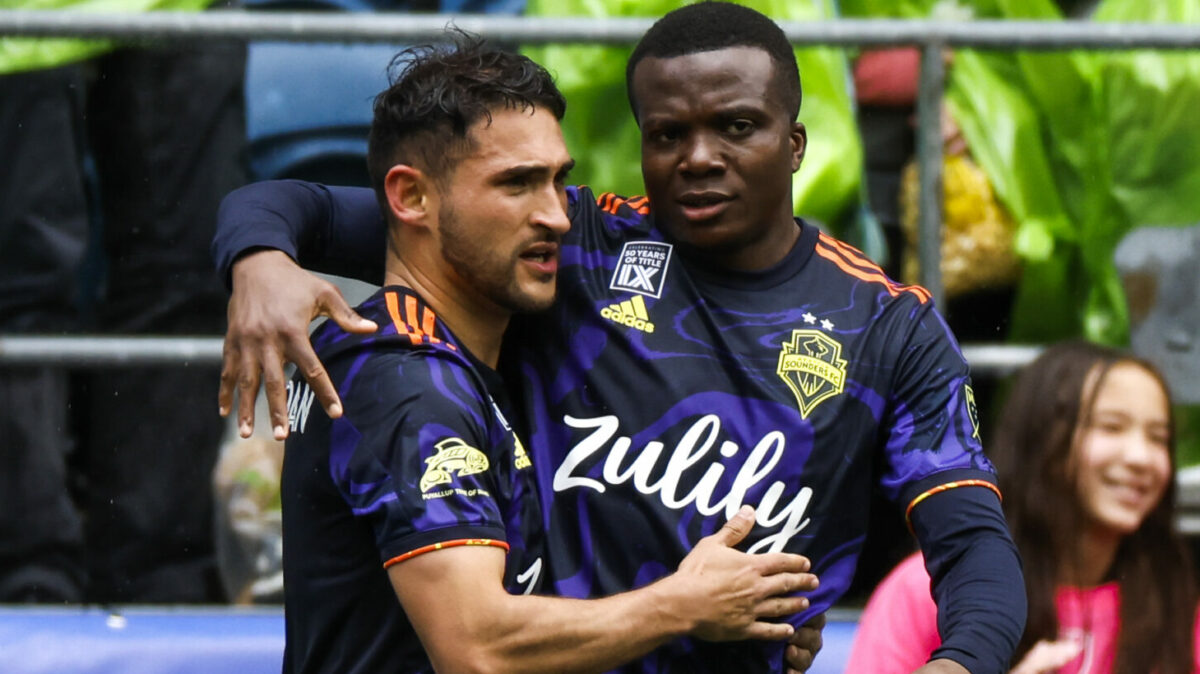 The Seattle Sounders continued their push up the Western Conference table on Sunday, claiming an important three points at Lumen Field against Minnesota United in comeback fashion.

Brian Schmetzer’s side scored three second-half goals, earning a 3-1 home win over the Loons and moving up to 11th place in the Western Conference. Cristian Roldan led the way with one goal and one assist, while Raul Ruidiaz and Nicolas Lodeiro also added their names on the scoresheet.

Robin Lod propelled Adrian Heath’s side in front in the 34th minute, putting the hosts under early pressure in front of their home fans. However, the Sounders kicked it up a gear after halftime.

Ruidiaz’s penalty-kick finish tied things up for the Sounders in the 50th minute before Cristian Roldan’s eventual game-winning goal continued a strong season for the U.S. men’s national team midfielder.

Nicolas Lodeiro iced the victory with an insurance goal in the 94th minute, moving the Sounders to one point behind Minnesota United in the West standings.

Some key results in the Eastern Conference highlighted Saturday’s action in MLS Week 11, with the New York Red Bulls earning a point against the leading Philadelphia Union, and Orlando City keeping pace with an exciting late win in Toronto.

Jeremy Ebobisse scored two goals for the San Jose Earthquakes in one of the wildest games of the weekend, in which the Whitecaps earned a 3-3 draw against the Quakes at home. Erik Godoy scored the equalizing goal in stoppage time.

Two more players in the USMNT mix scored this weekend, with Djordje Mihailovic continuing his hot streak and Gyasi Zardes converting a penalty kick for his first goal in a Rapids uniform.

Here is a closer look at all of the results from Week 11 of MLS:

Man of the Match: Cristian Roldan not only scored the winning goal for the Sounders, but also assisted on the insurance goal scored by Nico Lodeiro. Roldan is enjoying a career-best season for the Sounders, taking his tally up to two goals and two assists in league play.

Moment of the Match: Roldan’s blistering effort in the 74th minute swung momentum back into the Sounders favor for good.

Match to Forget: Wil Trapp conceded the penalty kick opportunity for the Sounders early in the first-half, truly giving the hosts a lifeline for an eventual comeback win.

Man of the Match: Thiago Almada’s lively start to his Atlanta United career continued Sunday, with the Argentine playing a key role on both of the Five Stripes’ goals.

Moment of the Match: Tommy McNamara isn’t known for his goalscoring ability, but the veteran midfielder almost played the hero for Bruce Arena’s side in the dying moments at Mercedes-Benz Stadium. McNamara’s long-range strike in the 87th minute rattled the left post and almost propelled the Revs to three points.

Match to Forget: Ronaldo Cisneros was shut down by the Revs backline, being held without a shot on goal in the draw.

Man of the Match: Joao Moutinho did a lot of the heavy lifting in central midfield for Orlando City, preserving the shutout and making five tackles while winning nine duels.

Moment of the Match: Kyle Smith’s near-post header stole three points on the road for Orlando, earning the club its fourth win in the past six matches.

Match to Forget: Ralph Priso-Mbongue struggled to add much to the attack for TFC. Bob Bradley subbed him off for Ayo Akinola at halftime.

Man of the Match: The Rapids’ attack thrived against the top club in the Western Conference, thanks in large part to Bryan Acosta’s efforts in midfield. Acosta supplied four key passes and made three tackles.

Moment of the Match: LAFC thought it had earned a break when John McCarthy saved Diego Rubio’s penalty kick, but McCarthy jumped off his line, a VAR review found. Rubio retook the penalty and scored.

Match to Forget: The first penalty kick call was a little debatable, but Francisco Ginella committed a clear error for the second PK call. Diego Rubio allowed the Rapids a solid advantage by burying the spot kick.

Man of the Match: Alistair Johnston turned in an outstanding performance, holding Charlotte to a shutout with three tackles. The fullback got involved offensively, dishing three key passes and scoring the second goal.

Moment of the Match: Djordje Mihailovic continued his excellent start to the 2022 season, scoring off an inch-perfect feed from Romell Quioto in the 45th minute. The goal showed CF Montreal’s speed in creating dangerous chances.

Match to Forget: Brandt Bronico found himself out of position on the second goal, and nearly gave up another chance minutes earlier. Charlotte FC struggled to stop CF Montreal’s attack from moving into the attacking third.

Man of the Match: Castellanos scored what will surely be remembered as one of this week’s best goals, and powered the attack with six shots and three of them on goal.

Moment of the Match: Castellanos sealed another dominant home win for NYCFC with a beautiful chipped goal past Crew goalkeeper Eloy Room.

Match to Forget: The Crew’s attack did not manage a shot on goal. Miguel Berry was taken off in the 72nd minute after taking only one shot.

Man of the Match: The Quakes’ defense continues to leak goals at an alarming rate, but Jeremy Ebobisse provided the finishing touch to earn a point on the road. Ebobisse scored twice to bring his 2022 goal total to seven.

Moment of the Match: Erik Godoy found himself unmarked in the middle of the box to cleanly knock in a late equalizer off a corner kick.

Match to Forget: Florian Jungwirth struggled to assert himself in central defense against his former club. The Whitecaps defender was involved in two Quakes goals in which the ball came across the face of goal.

Man of the Match: Luquinhas kept the Red Bulls’ attack going, even after the team went down a man. Luquinhas had two shots, both on goal, and provided the goal that allowed the Red Bulls to take a point from this tough match on the road against the Eastern Conference leaders.

Moment of the Match: Luquinhas seized the initiative in a key moment, scoring a little more than 10 minutes after the Red Bulls went down a man.

Match to Forget: Dylan Nealis left the Red Bulls in a lurch with his sending off in the 55th minute. Nealis made an unnecessary late challenge well after the ball had left the opposing player’s feet.

Man of the Match: Luciano Acosta was busy in his 88-minute shift and secured the road win for FC Cincinnati.

Moment of the Match: Acosta’s late game-winner marked his fifth-straight game with a scoring involvement and extended Cincinnati’s club-record winning streak to four.

Match to Forget: Fire defender Rafael Czichos’ own goal was the fatal flaw that guaranteed his side’s five-game losing (eight-game winless) streak across all competitions

Man of the Match: Taxi Fountas continues to star for D.C. United. He scored in first-half stoppage time, then beat a defender to start the play for Ola Kamara’s 74th-minute goal.

Moment of the Match: Kamara scored his fifth goal of the season in the 74th minute to earn a point for D.C. United.

Match to Forget: DeAndre Yedlin struggled to stop Fountas on D.C.’s left wing, and didn’t add much more to Inter Miami’s attack as the club dropped points at home.

Man of the Match: Darwin Quintero kept the Dynamo’s attack chugging along, with two of the team’s shots on goal. He converted a penalty kick to ensure the Dynamo would win, despite being a man down for most of the game.

Moment of the Match: Quintero’s converted penalty kick in the 53rd minute was a decisive moment for the Dynamo to grab all three points.

Match to Forget: Joe Willis conceded a penalty kick with a late slide fairly early in the second half. The error gave the Dynamo a two-goal lead and let Nashville’s chance to push for an equalizer with a man advantage slip.

Man of the Match: Andrew Brody capped a strong defensive showing with the game’s winning goal. Brody made one tackle and won four of six duels.

Moment of the Match: Andrew Brody sealed the win win an incredible upper-90 finish from the top of the 18-yard box in the 88th minute to hand RSL all three points.

Match to Forget: Austin FC central midfielder Dani Pereira put the club in a tough spot when he was sent off in the 47th minute. Pereira was sent off after denying an obvious goalscoring opportunity.

Man of the Match: Sebastian Blanco made a huge mark on this game, scoring twice and assisting two more goals as the Timbers’ offense found a spark it badly needed.

Moment of the Match: New signing Nathan Fogaca scored his first goal in a Timbers uniform in the 46th minute.

Match to Forget: Robert Voloder struggled to stop the Timbers from consistently threatening Sporting KC’s goal. To make matters worse, Voloder was sent off after a rough tackle in the 78th minute.

Man of the Match: Jesus Ferreira completed a first half brace for FC Dallas in what ended up being a comfortable victory in Los Angeles. With his brace Ferreira moved into first place in the Golden Boot standings with 8 goals through 11 matches.

Moment of the Match: It has been a slow start for Douglas Costa with the Galaxy, but in the 68th minute the former Juventus and Bayern Munich attacker showed his quality with a beautiful left-footed free kick goal to help the Galaxy avoid the shutout.

Match to Forget: As evident by the score line, the Galaxy back line struggled to contain the FC Dallas attack, but newly acquired left-back Chase Gasper was not at his best in his first start with the Galaxy. The 26 year old defender was beaten badly for the first FC Dallas goal and looked out of sync with his new teammates in possession.