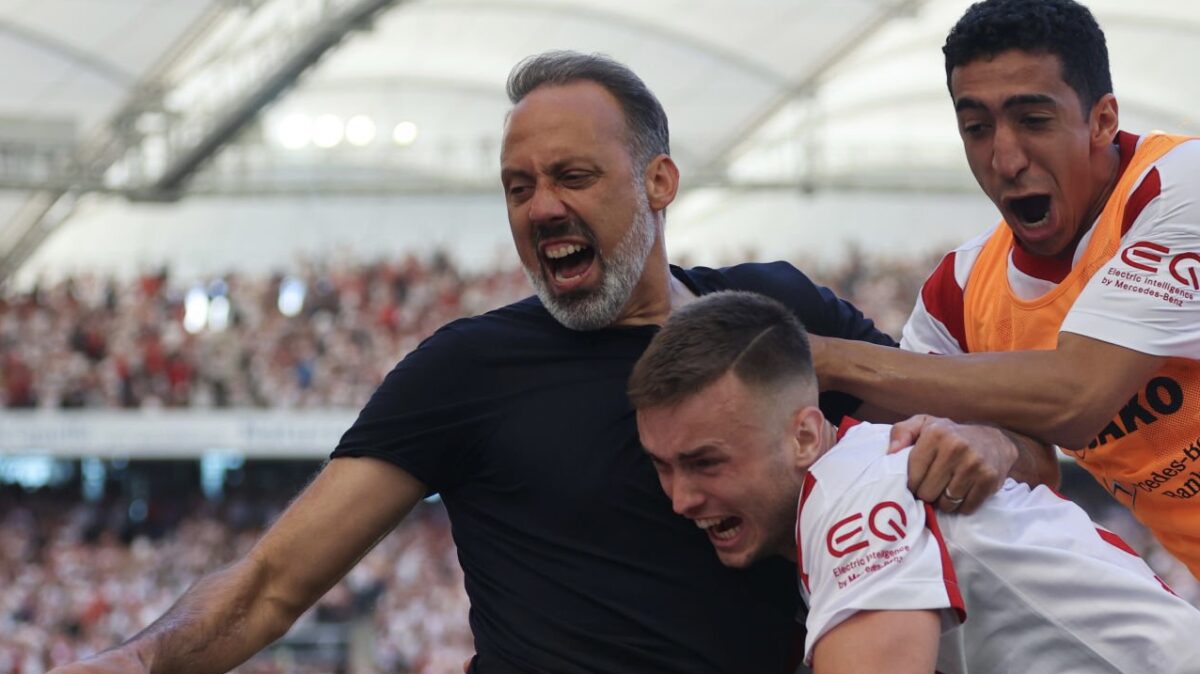 Pellegrino Matarazzo and Stuttgart entered the final day of the Bundesliga season needing three points to avoid entering the Bundesliga promotion/relegation playoffs and in the final minutes at Mercedes-Benz Arena, the American manager watched as his club secure their league status for 2022-23.

Stuttgart leapfrogged Hertha Berlin into 15th place and league safety after using a 92nd minute winner from Wataru Endo to defeat Cologne 2-1 at home. The season finale victory paired with Hertha Berlin’s 2-1 loss to Borussia Dortmund, pushed Hertha into the playoff place where it could face either one of four teams from the 2. Bundesliga later this month.

Sasa Kalajdzic’s 12th minute opener propelled Stuttgart in front 1-0 after the forward scored in the same minute he was denied from the penalty spot. Chris Fuhrich’s cross was hammered home by Kalajdzic for his sixth league goal of the season.

Cologne fought back to tie things up in its quest for European qualification, using Anthony Modeste’s 57th minute equalizer to make it 1-1. The visitors needed a victory to have any chance of finishing in the top-six, but eventually had those aspirations wiped away with Stuttgart stealing all three points.

Hiroki Ito’s cross in the 92nd minute was hammered home by Endo from close range, sending Stuttgart out of the bottom three and into safety. The final result would stand at 2-1, giving Matarazzo his most important victory as Stuttgart manager, and giving the historic club another year in the German top-flight.

The 44-year-old has served as Stuttgart manager since December 2019, posting a 30-36-24 record. While one American will enjoy another season in the Bundesliga, three Americans will prepare for the 2. Bundesliga next fall.

George Bello and Arminia Bielefeld suffered relegation on Saturday following a 1-1 draw with RB Leipzig. Bello, 20, has made 10 league appearances in his first spell abroad, although his late own goal error in a May 6 2-1 loss to Bochum, put Arminia Bielefeld in a major hole heading into Matchday 34.

Julian Green, Timothy Tillman and Greuther Furth finished bottom of the Bundesliga standings, totaling 18 points from 34 matches. Green, 26, finished with 23 appearances this season under Stefan Leitl while the 23-year-old Tillman scored one goal and added two assists in 28 league appearances.