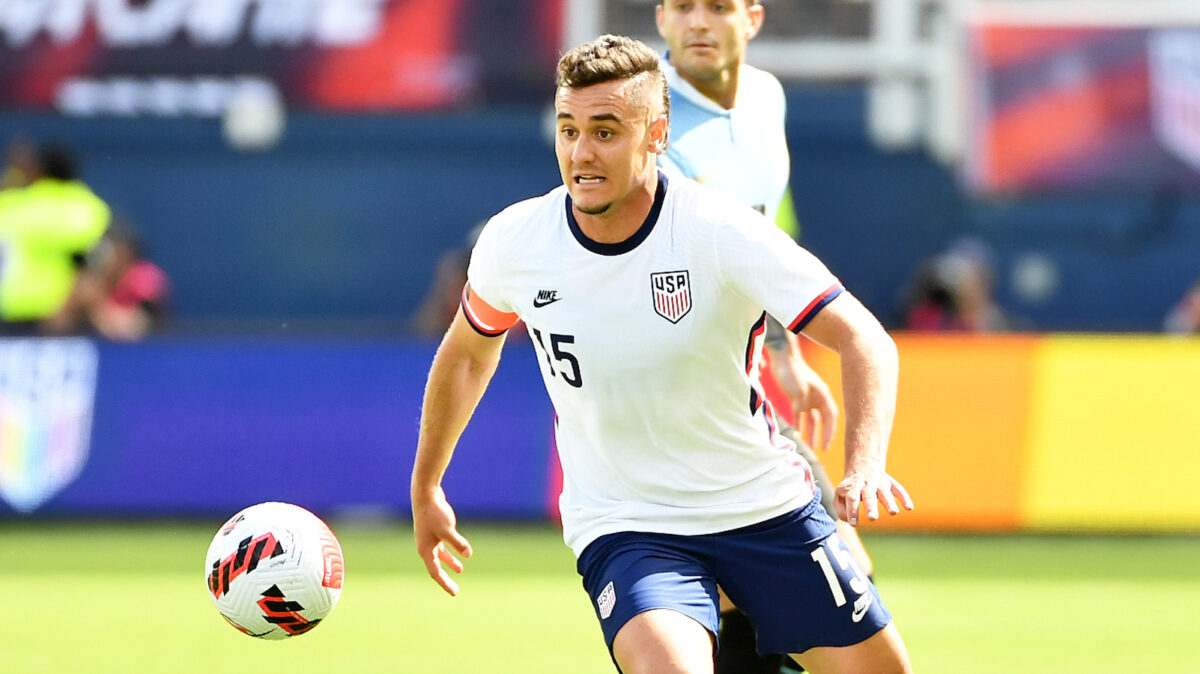 The quest to replace injured centerback Miles Robinson has become one of the key tasks for the U.S. men’s national team as the FIFA World Cup looms on the horizon, and Aaron Long’s emergence as the front-runner to take on the role has been met with at least some consternation among a section of the USMNT fanbase that prefers other options.

As far as Gregg Berhalter is concerned, extreme criticism of Long as a USMNT option in central defense is misguided and he sees the New York Red Bulls standout coming along well as he works his way back from the torn Achilles he suffered just one year ago.

“That statement in itself, that’s insane,” Berhalter said when asked about critics who think Long is in bad form. “The guy was Defender the Year in MLS, is coming back from an Achilles injury and we’re purposely putting him in these games to keep pushing him to keep improving him.

“He’s got a great character, he’s got tremendous speed and he’s working his way back to this level, which is a different level,” Berhalter said. “I think he’s doing quite well and I’m pleased with his progress.”

Long started the USMNT’s first two June friendlies, a 3-0 win against Morocco and 0-0 draw with Uruguay, and faced a physical test from Moroccan striker Ayoub El Kaabi, who finished the recent Turkish League season as the second-leading goal scorer in the league. Long limited El Kaabi to two shots and zero successful dribbles, though Long did earn a yellow card for a foul on El Kaabi 40 yards from goal after El Kaabi turned and slipped past Long near midfield.

Long turned in a solid shift in 45 minutes of action against Uruguay, registering four recoveries. He had one nervy moment when he sent a pass to goalkeeper Sean Johnson that left Johnson under pressure and nearly led to a turnover, but aside from that moment Long performed well, particularly with the added responsibility of covering for Joe Scally, who struggled at left back in his first USMNT start.

Berhalter has taken looks at some other younger centerback options in Cameron Carter-VIckers and Erik Palmer-Brown, while Chris Richards remains a top candidate to start at centerback at the World Cup if he can stay healthy, but the quest to find an ideal centerback partner for Walker Zimmerman currently sits with Long in the lead, which suits Zimmerman just fine.

“Aaron is a guy that I’m always comfortable playing with, we have a great friendship and relationship on and off the field,” Zimmerman said after the draw with Uruguay. “There really is a chemistry there. And I think a lot of that comes down to the face we both organize and talk through a lot of situations. The communication is there from both sides, the competitiveness is there from both sides, and we want to make each other look good, we want to make each other perform at the best level that we can.

“So he’s a guy I trust, I’m really proud of the way that he’s come back from his injury, it’s not easy to return from an Achilles injury, let alone return to the international level,” Zimmerman said. “So he’s shown in the past two games, he can keep a zero, he can lead a back line, and I’m happy that he’s back.”

Long was a USMNT starter from the beginning of Berhalter’s tenure as national team coach, but he was sidelined by a torn Achilles suffered in May of 2021. That opened the door for Miles Robinson to step in and grab hold of a starting role. Robinson excelled at the 2021 Concacaf Gold Cup and carried that form into World Cup qualifying. He had established himself as Zimmerman’s preferred partner in central defense before suffering a torn Achilles in early May.

Berhalter could still wind up turning to someone like Richards, who is missing the USMNT’s June matches due to injury, and he has insisted that John Brooks could play his way back into the conversation, but for now the job starting alongside Zimmerman is Long’s to lose.