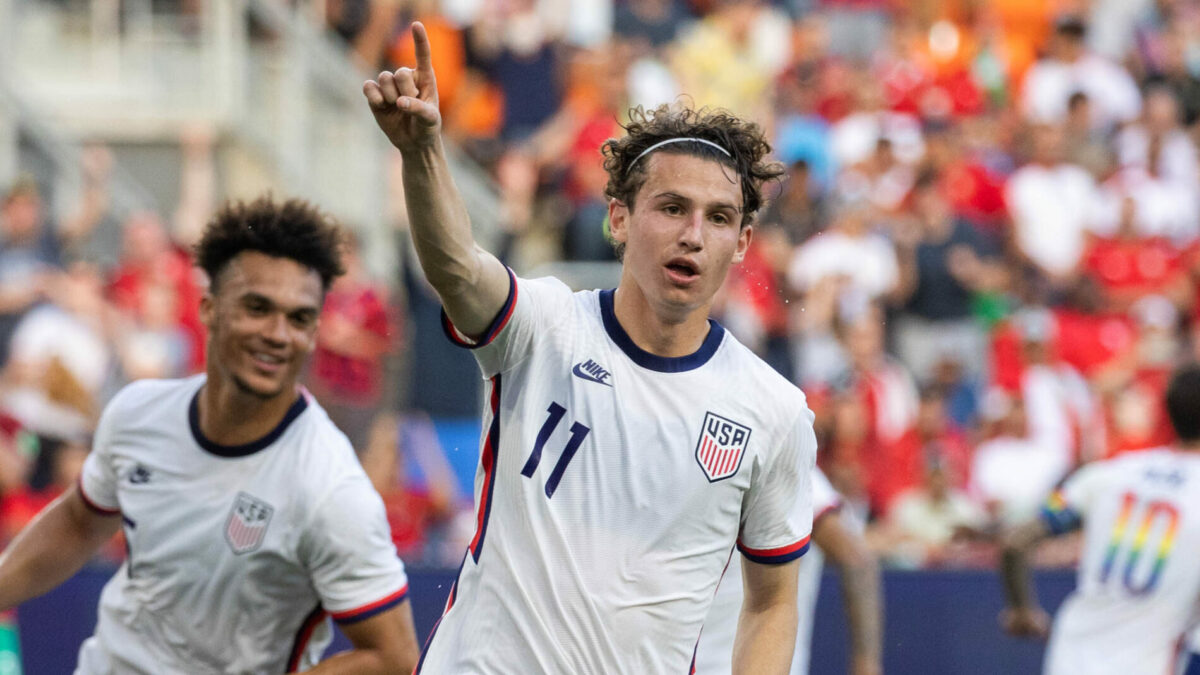 Brenden Aaronson has enjoyed a whirlwind of a past month. He lifted a pair of trophies with Red Bull Salzburg, followed that up with a $28 million transfer to Leeds United, and on Wednesday he took full advantage of the rare national team shift at his most natural position.

Aaronson made the most of that chance, scoring a goal and playing well in a 3-0 friendly win over Morocco at TQL Stadium.

Just six days after earning a permanent transfer to English Premier League side Leeds United, Aaronson returned to international duty for Gregg Berhalter’s side and left Wednesday’s match with added confidence after showing he can be a USMNT difference-maker in the middle of the park.

“It was great to be back in the team, I missed being back here,” Aaronson said. “I loved playing in the role I did tonight, I played at that spot for my club. I’m not an all-out winger, but an inverted winger and tonight I showed that I can play in these spaces. I showed I can turn and bring creativity to the squad, which some people may not see during my games at Salzburg.

“Defensively, it’s about being physical and it’s for me to continue working on that part of the position,” Aaronson added. “I think I did my job defensively tonight, maybe it’s not about winning every duel, but maybe it’s about getting into shape defensively, not letting the opponent go through you with passes or the ball. That part is maybe less intense than being on the ball a lot of the time.”

Aaronson started alongside Yunus Musah and Tyler Adams in the USMNT’s midfield, stepping in for Weston McKennie and delivering a busy shift on both sides of the field (McKennie is still working his way back to full fitness after returning from a long injury layoff). Aaronson’s opening goal helped the USMNT break the deadlock, completing a lung-busting run upfield to be in position to tap home Christian Pulisic’s assist for his sixth international goal.

Even after the USMNT took a 2-0 lead into the halftime break, Aaronson’s night wasn’t finished, as the midfielder continued to cause havoc for the Moroccan defense. Aaronson registered two shots on goal, led all players with nine duels won, three completed dribbles, and was tied with Pulisic with two fouls drawn.

Aaronson featured heavily in Concacaf World Cup Qualifying out wide, his return to a central midfield role didn’t hamper his impact on the match.

“I was impressed, I really thought he gave us energy,” Berhalter said about Aaronson. “He gave us a bite, he won some good duels, and then to arrive in the penalty box like that on Christian’s play just shows great effort and tenacity. I think he did good and it was nice to have that many skillful players on the field.”

“I think they both are two guys that I enjoy playing with,” Pulisic said when asked about the Aaronson-Yunus Musah central pairing. “They run all over the place, they do a lot of good things with the ball, and they help the team with a lot of hard work. I think it’s a really good combination.”

After missing the final round of qualifiers in March, Aaronson played a key role in helping Red Bull Salzburg repeat as Austrian Bundesliga and Austrian Cup winners before sealing his move to England.

Now with consistent minutes under his belt and a growing role within the USMNT midfield, Aaronson will prepare to continue helping the Americans as a four-match June window continues with final matches against Uruguay, Grenada, and El Salvador.

“It was definitely different than in qualifying,” Aaronson said post match. “Everything is laid out there in qualifying and it’s hard to combine the two but it felt like a real game. For me and the guys it’s for us going to the World Cup. We want to see what it’s about and I think it was the same for Morocco. I think tonight was one of our better performances of the year, it felt really good.

“This is what we want, it’s about testing the waters and we did a great job with that,” Aaronson added. “Morocco is a good team, they’ve done good in Africa. They’re a top team and to do what we did and go up 3-0 was great, now it’s on to Uruguay. It will be another intense match for us.”