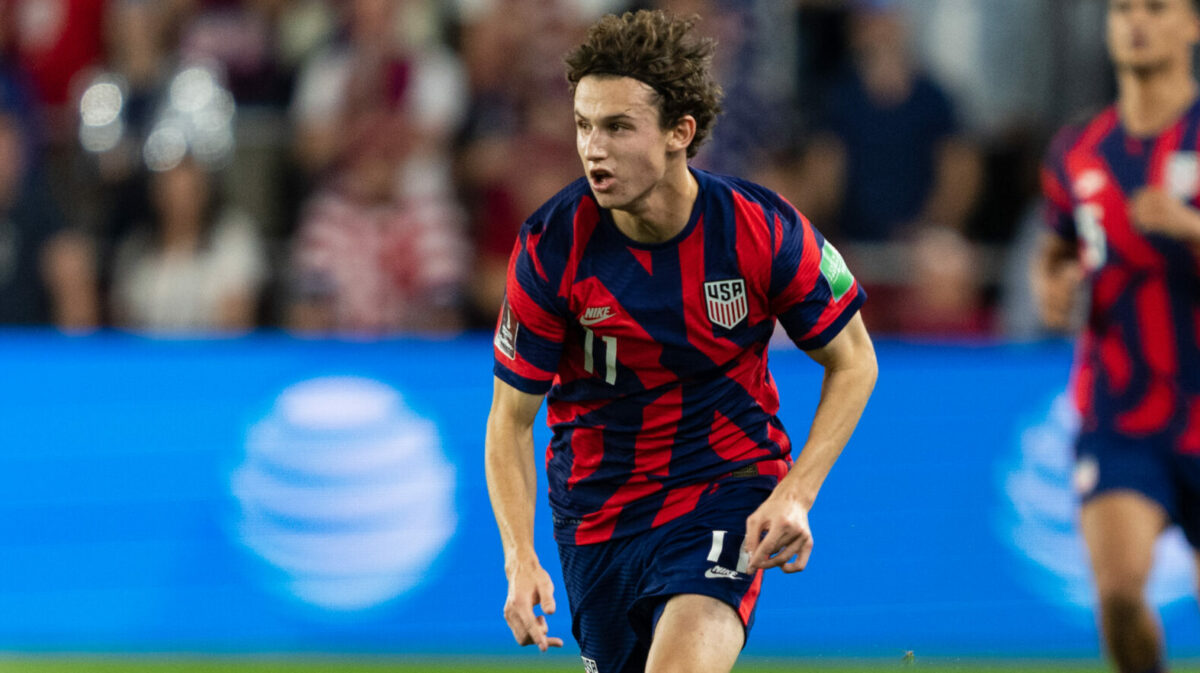 CINCINNATI — Brenden Aaronson has made 18 appearances for the U.S. men’s national team heading into Wednesday’s friendly against Morocco, but few of those have come playing in his natural central midfield role. That makes his opportunity on Wednesday all the more interesting to watch as Leeds United’s newest signing looks to bolster his case for a starting role at the World Cup.

“We’re gonna play him in the middle. See how he does. Use his mobility to try to get in between the lines,” USMNT coach Gregg Berhalter said on Tuesday. “It’ll be interesting to see what he does in the game.”

Berhalter has used Aaronson more on the wing during his past appearances with the USMNT, with the notable exception being as a starting attacking midfielder against El Salvador in the opening match of Concacaf World Cup qualifying last September. Aaronson struggled on that day, much like the rest of the team, but those struggles were more about an inexperienced team coping with World Cup qualifying than Aaronson not fitting well into a central role.

Aaronson has made a career as a tenacious and creative central midfielder, from his time with the Philadelphia Union to more recently in helping Red Bull Salzburg to back-to-back Austrian League titles and a run to the knockout rounds of the UEFA Champions League. The emergency of Yunus Musah as a starter alongside Weston McKennie and Tyler Adams in Berhalter’s preferred central midfield trio, coupled with more of a need for wing options, led to Aaronson seeing more time in a wide role in the USMNT setup.

McKennie is still not 90-minutes fit after recently returning from a lengthy injury layoff following a broken foot, which will give Aaronson an opportunity to play in his more natural position.

“I think we all know Brenden’s qualities,” McKennie said,. “He’s very, very both-sided of the ball, even whenever he’s playing the winger. So I think he can definitely bring the 1-v-1 abilities and creating space for himself and for other players in the midfield and also tracking back and winning balls and breaking up plays.

“I always refer to him as like an annoying gnat, like a fly that you can’t get out of your face,” McKennie said. “And it’s always tough for me to play against him as well. So I think he’ll definitely add a different type of play into the middle.”

Aaronson is fresh of completing a $28 million transfer from Red Bull Salzburg to Leeds United and while the move might seem risky to some in a World Cup year, Aaronson is brimming with confidence about being able to succeed in the Premier League.

“I felt like I was ready. I’ve talked to Christian couple of the guys about it so far to see what the level is like in the Premier League,” Aaronson said. “I played Champions League football and the team has done well, and I felt like I was a part of that, so I feel like I’m ready to do this.

“The Premier League is the best league in the world. I think everybody knows it from the level of play their week in week out,” Aaronson said. “You’re playing against Aston Villa, who just got Coutinho and Aston Villa is finished, I don’t know, 13th or 14th this year. So the league is unbelievable and I know that going into it, but it’s the best way to challenge myself as a player being in the best league in the world. And they’ve told me how hard just week in week out, you’re playing big opponents, and that’s something that I thrive on. It’s always been a dream of mine.”

Before Aaronson embarks on his journey to Leeds, and his reunion with manager Jesse Marsch, he will be taking advantage of the opportunity to cement his place in Berhalter’s plans as the USMNT prepares for a busy four-match June, starting with a challenging test on Wednesday against Morocco.

“It’s teams that have qualified for the World Cup so it’s a real test for us,” Aaronson said. “These next two upcoming games against Morocco and Uruguay, it’s going to be tough games, but it’s going to really show what the group’s about. I think we’re all focused and ready for this challenge, and then on to the Nations League, and we really want to defend our title.”