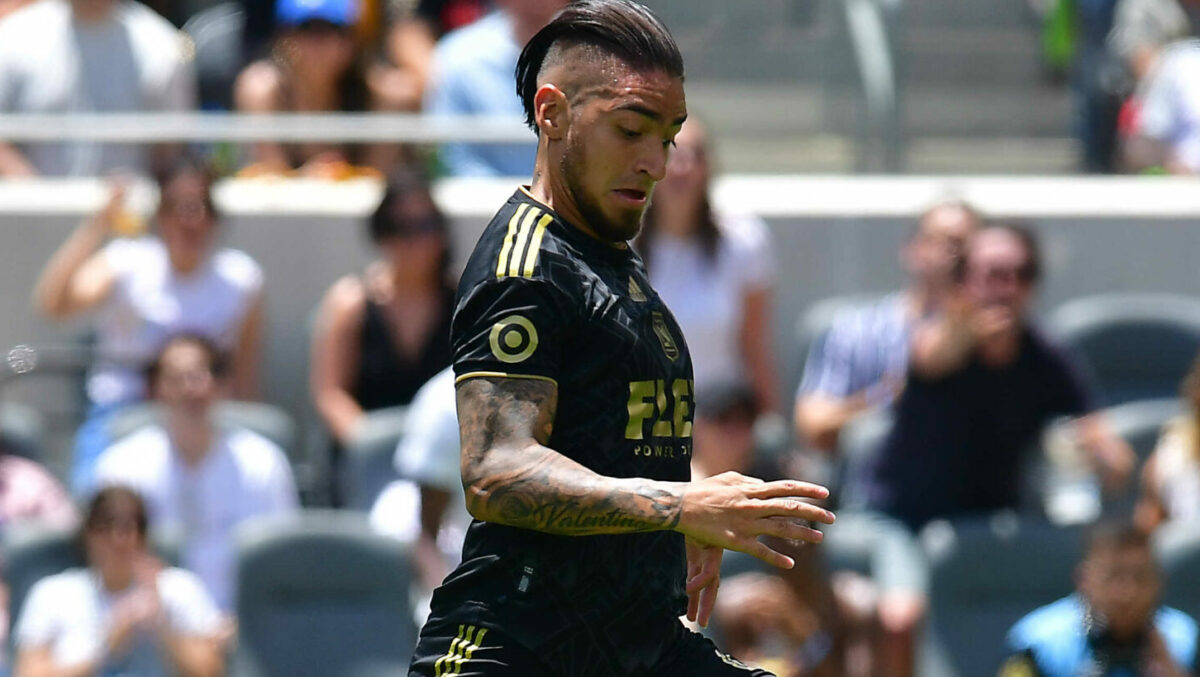 LAFC has relied on Cristian Arango’s goalscoring abilities heavily this season and Steve Cherundolo watched proudly as his in-form forward delivered a key spark off the bench in Sunday’s inter-conference victory over the New York Red Bulls.

Arango scored the breakthrough goal in a 2-0 home triumph over the Red Bulls, while the forward also helped spring the counterattack that led to the second goal at Banc of California Stadium. LAFC stayed top of the Western Conference with three points at home, moving to 6-2-1 in its home stadium in 2022.

The Philadelphia Union used a late winner from Cory Burke to move to first place in the Eastern Conference after a 2-1 victory over NYCFC at Subaru Park. Jose Martinez’s long-range shot deflected off of Burke and past Sean Johnson to give Joe Curtin’s squad a needed win on home soil.

Mikael Uhre’s first home goal for the Union was cancelled out by Valentin Castellanos’ penalty-kick equalizer. Castellanos scored from the spot after VAR ruled in favor of a handball by Union left back Kai Wagner.

The Union held on for a second-straight win over NYCFC this season.

The Seattle Sounders appeared to be one of the best teams in Saturday’s MLS action, exposing plenty of Sporting KC’s issues and lack of rest in a 3-0 demolition. Cristian Roldan and Jordan Morris excelled with each player scoring a goal and assisting another goal.

Toronto FC made its mark, with a 2-1 win over Atlanta United at home. Ralph Priso-Mbongue, a 19-year-old Canadian is the latest young TFC player to make a serious impression, scoring a late winner. Another Canadian side, CF Montreal, triumphed over a bare-bones Charlotte FC side thanks to a winning goal from substitute Mathieu Choinere.

Indiana Vassilev, a 21-year-old Inter Miami midfielder on loan from Aston Villa for the second straight season, provided one of the best individual performances of the day. Vassilev, who entered as a substitute, scored two late goals to help Miami earn three points over Minnesota United.

Here are the results from this weekend’s MLS slate:

Man of the Match: Cristian Arango began the match on the bench for the Black and Gold, but the Colombian striker made an immediate impact in his 26 minutes on the pitch. Arango broke the deadlock in the 68th minute, beating Red Bulls goalie Carlos Coronel for a 1-0 lead. Just two minutes later Arango was at it again for LAFC, playing a long through ball to Brian Rodiguez that lead directly to the second LAFC goal.

Moment of the Match: In the 70th minute the aforementioned Cristian Arango spurred a well-worked LAFC counterattack, finding Brian Rodriguez who then slipped in Diego Palacios for the second goal of the match, swinging the game heavily in favor of LAFC.

Match to Forget: Omir Fernandez struggled in leading a undermanned Red Bulls attack with star playmaker Luquinhas in health and safety protocols. The 23-year-old midfielder failed to make a tangible impact on the match before being subbed out at halftime.

Man of the Match: Jose Martinez’s shot in the final minutes helped the Union snatch a late winner at home, but the aggressive midfielder also dominated in his performance. Martinez won eight of 11 duels, made 12 recoveries, and four clearances, shutting down Maxi Moralez in a head-to-head battle.

Moment of the Match: Cory Burke was in the right place at the right time as the substitute got credit for the winning goal. Jose Martinez’s long-range shot hit the striker off the knee before nestling into the back of the net.

Match to Forget: Malte Amundsen came off the bench for NYCFC, but was the guilty party who kept Cory Burke onsides for the winning goal. Amundsen also lost four of six duels from his left back position.

Man of the Match: Djordje Petrovic showed his ability as the Revs’ new starter, making six saves to preserve a road point.

Moment of the Match: Petrovic stopped a shot from Brian White in the 84th minute, stretching to keep an on-target shot out with a diving save.

Match to Forget: Whitecaps left winger Ryan Raposo was replaced in the 66th minute after struggling to make a mark in the attack.

Man of the Match: Cristian Roldan supplied a perfect cross for Will Bruin to score the first goal, then he scored one of his own to finish the rout.

Moment of the Match: The Sounders put their stamp on the match from the beginning. Will Bruin’s 8th-minute goal set the tone for the Sounders to turn in a dominant home performance.

Match to Forget: Nicolas Isimat-Mirin had a difficult day in central defense for Sporting KC. Isimat-Mirin was ball-watching on the first goal and couldn’t keep up with Jordan Morris on Roldan’s 76th-minute tap-in.

Man of the Match: Randall Leal supplied two excellent passes that led to both of Hany Mukhtar’s goals. He played Dax McCarty in on goal in the first minute of first-half stoppage time and found Mukhtar making a run in the 50th minute, as Mukhtar scored with a heavy deflection.

Moment of the Match: Mukhtar’s goal in the first minute of first-half stoppage time showed Nashville’s killer instinct, as well as the disorganization in center defense for D.C. United.

Match to Forget: Julian Gressel was subbed out in the 56th minute after a lackluster showing. Gressel failed to clear the ball with a header in the 6th minute, leading to Lovitz’ opening goal.

Moment of the Match: Mathieu Choiniere scored just one minute after entering the match, with an early second-half goal that proved to be decisive.

Match to Forget: Charlotte FC right back Jaylin Lindsey struggled on the decisive goal. Lindsey was slow to react in shutting down Mathieu Choiniere before Choiniere dribbled into the box and scored.

Man of the Match: Alejandro Pozuelo led the charge for Toronto FC’s attack. He finished with three key passes and three shots. His quick corner kick in the 78th minute led to TFC’s late winning goal.

Moment of the Match: 19-year-old Canadian Ralph Priso-Mbongue secured three points for TFC with a well-placed strike in the 78th minute.

Match to Forget: Atlanta United defender Alan Franco found himself 1v1 with Jonathan Osorio in the 8th minute, but failed to stop Osorio from claiming an early lead.

Man of the Match: Thorleifur Ulfarsson was ever-present in the Dynamo’s attack, with four shots and two on goal. He scored the Dynamo’s first goal after reacting faster than two defenders.

Moment of the Match: Darwin Quintero showed his first touch and dribbling ability to double the Dynamo’s lead just before halftime.

Match to Forget: Fire centerback Carlos Teran struggled in the air on both goals. Teran had trouble heading a ball at the back post on the first goal, and couldn’t clear a ball into the box on Quintero’s goal.

Man of the Match: Indiana Vassilev entered as a substitute looking to turn around Inter Miami’s fortune. He made an excellent run to score his first goal in the 87th minute, then hit a powerful first-time shot in the 90th minute for his second goal.

Moment of the Match: Indiana Vassilev fired the ball into the back of the net to claim all three points at DRV PNK Stadium as Inter Miami came back.

Match to Forget: Loons centerback Bakaye Dibassy will want to forget about his difficulty clearing a ball that fell to Vassilev, who scored the winner in the 90th minute. Dibassy fell to the ground after trying to head the ball way.

Man of the Match: Sebastian Driussi helped Austin FC turn the tide by scoring from a difficult angle to put his team on the board. Driussi led Austin’s attack with five shots and five duels won.

Moment of the Match: Danny Hoesen scored just one minute after coming on as a substitute, saving a point for Austin FC with his short-range header goal in the 85th minute.

Match to Forget: Austin FC centerback Julio Cascante found himself at the crux of both of FC Dallas’ early goals. He struggled to shut down Paxton Pomykal on the first one, and could not clear the ball away from Brandon Servania on the second goal.

Man of the Match: Eloy Room made four saves, including a diving save to his left to stop a shot from Justin Meram, on the way to securing a road point for the Crew.

Moment of the Match: Pedro Santos nearly scored an incredible goal in the 23rd minute, but Zac MacMatch tipped the ball over the bar with an athletic move.

Match to Forget: The Crew attack showed the need for Cucho Hernandez to make his debut when ready. Miguel Berry was replaced after 61 minutes after he failed to record a shot and completed only 72.7% of his passes.

Man of the Match: Timbers striker Jaroslaw Niezgoda proved to be the answer to the Timbers’ scoring woes. He showed the ability to make dangerous runs and scored two goals to put the game out of reach in the second half.

Moment of the Match: The Timbers stretched the lead to two goals in the 54th minute when Bill Tuiloma sent a pass all the way down the field for Niezgoda to finish. The play was also curiously not overturned for a handball after VAR review.

Match to Forget: Rapids goalkeeper William Yarbrough conceded a penalty and appears to have been injured in the process. Yarbrough came out to collect the ball on the edge of the box and clattered into Santiago Moreno.