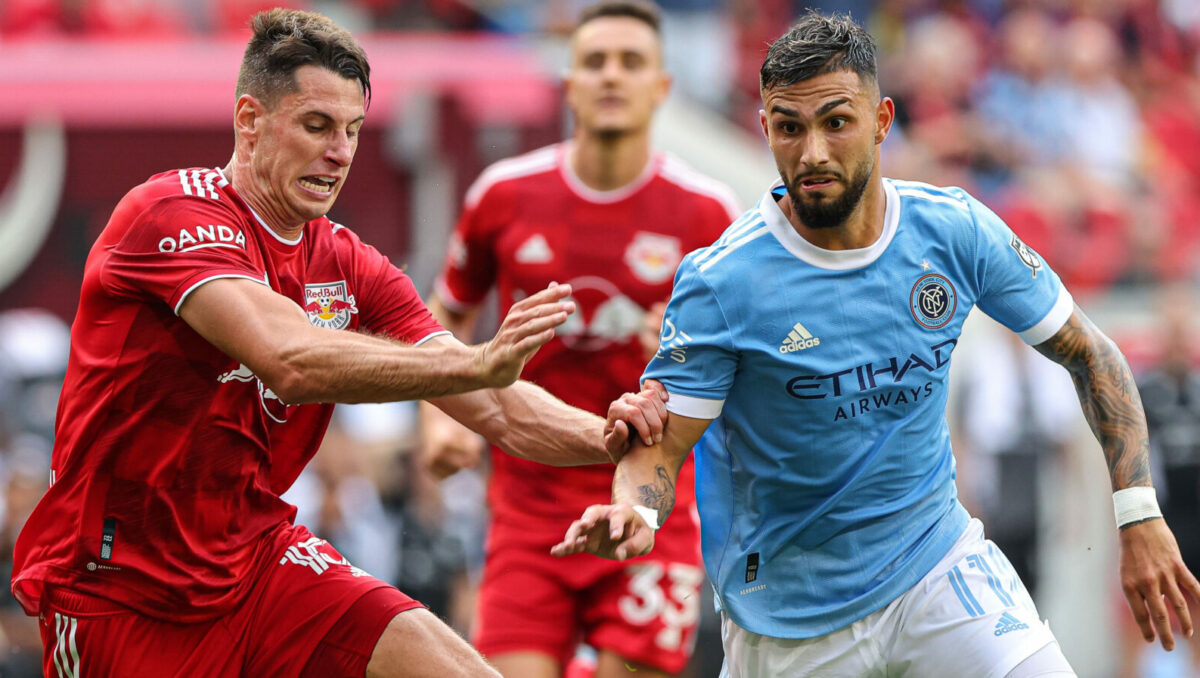 Valentin Castellanos’ game-winning goal in the 69th minute proved to be the difference at Red Bull Arena as NYCFC claimed a 1-0 victory. It was NYCFC’s third-straight win in an eight-day period as the defending MLS Cup champions moved five points clear of their local rivals.

Cucho Hernandez and Lucas Zelarayan starred for the Columbus Crew on Sunday, helping Caleb Porter’s side claim a 2-0 win in the latest Hell is Real Derby. Hernandez’s first-half header gave the in-form forward his fourth league goal in three appearances. Zelarayan iced the victory by scoring from the penalty spot late in the second-half.

Saturday’s MLS slate featured the Philadelphia Union earning a 2-1 comeback win over the New England Revolution, using goals from Daniel Gazdag and Mikael Uhre to remain top of the Eastern Conference. Despite a goal from Gustavo Bou, Bruce Arena’s Revolution suffered a second-straight road loss to an East rival.

The Colorado Rapids extended their unbeaten run to three matches with Robin Fraser’s side defeating the visiting L.A. Galaxy 2-0. Diego Rubio and Gyasi Zardes both found the back of the net for the Rapids as Colorado handed the Galaxy a third-straight defeat.

Emanuel Reynoso stole the show for Minnesota United, scoring twice in a 2-0 home win over D.C. United. The Argentine midfielder found the back of the net in each half for Adrian Heath’s squad, giving the Loons their fourth win from their past five matches.

Midseason woes for the Sounders continued, as the CCL champs fell to the Chicago Fire, 1-0, away from home. The Sounders attack is showing how much is misses injured striker Raul Ruidiaz, while the Fire put forth a strong effort in its second straight win.

CF Montreal celebrated a 1-0 home win over rivals Toronto FC, using a second-half own goal from Lukas MacNaughton to claim all three points. James Pantemis made four saves to preserve the shutout for CF Montreal while Djordje Mihailovic made his first club appearance since May 28 due to injury.

Man of the Match: Darwin Quintero created the Dynamo’s second goal out of nowhere and kept the team’s attack humming with three key passes.

Moment of the Match: Sebastian Ferreira made an immediate impact for the Dynamo, entering as a substitute and finishing off a clear-cut chance in the 71st minute.

Match to Forget: Quakes right back Paul Marie committed some key mistakes on both goals. He found himself out of position on the Dynamo’s first goal, and couldn’t escape Darwin Quintero’s pressure on the play that led to the second goal.

Man of the Match: Jefferson Savarino helped RSL take over in the second half, with a goal and an assist.

Moment of the Match: Pablo Ruiz’ 64th-minute goal showed how ineffective Sporting KC’s defense could be. RSL thrived on the wings and met little resistance when sending the ball inside.

Match to Forget: Sporting KC centerback Nicolas Isimat-Mirin could not provide any key tackles. He was directly responsible for not shutting down Pablo Ruiz for the second goal, and failed to intervene as a cross came between the two centerbacks for the first or third goals, which were both headers.

Man of the Match: Fresh off of switching his jersey number from 11 to 20 due to the arrival of Gareth Bale, Cifuentes delivered another stellar performance in the heart of the LAFC midfield and scored the eventual game-winner for the Black and Gold. The goal was a bit of luck for the Ecuadorian international with a header from Ryan Hollingshead bouncing off the post and Cifuentes being the one to tap the rebound home for his third goal in the last two matches.

Moment of the match: Arguably the biggest signing of the MLS summer transfer window, superstar Gareth Bale made his debut for LAFC, coming on in the 72nd and showcased his talent with a few clever touches in his brief cameo.

Match to forget: Joe Willis. It was a hard-fought match by the entire Nashville team, but Joe Wills is likely wishing he would have done better on Cristian Arango’s scuffed chip that squeaked past Willis to give LAFC the first goal of the game.

Man of the Match: Santiago Rodriguez assisted on the game-winning goal for NYCFC and overall excelled in a lot of areas for the visitors. Rodriguez won the most duels (11), drew the most fouls (5), completed the most dribbles (4), and the created the most chances (4).

Moment of the Match: Castellanos’ deft finish in the box propelled NYCFC into a 1-0 lead that it would relinquish.

Match to Forget: Lewis Morgan and Luquinhas both failed to deliver in the final third for the Red Bulls, lacking the cutting edge to truly test Sean Johnson in goal.

Man of the Match: Lucas Zelarayan starred for the Crew in Sunday’s Hell is Real Derby, setting up Cucho Hernandez’s opening goal before scoring from the penalty spot himself to ice the 2-0 victory.

Moment of the Match: Zelarayan’s penalty kick goal iced the home win for the Crew and condemned FC Cincinnati to a fifth league defeat against its in-state rivals.

Match to Forget: Brandon Vazquez was relied on to lead the way for FC Cincinnati, especially with Luciano Acosta suspended, but the forward was held in check by the Crew defense. Vazquez lost nine of 12 duels and failed to register a single shot in the match.

Man of the Match: Marcelino Moreno did not find the back of the net for Atlanta United, but he was a live-wire for the Five Stripes. Moreno completed a match-high eight dribbles, three tackles, and won 20 duels.

Moment of the Match: Both Josef Martinez and Alexandre Pato came close to handing three points to their respective clubs, but both forwards were left frustrated after hitting the post in stoppage time.

Match to Forget: Facundo Torres lost 10 duels from his attacking position for Orlando City, failing to have much of an impact. Torres also did not register a shot on goal, eventually being replaced in the second-half.

Man of the Match: Daniel Gazdag continued his impressive goalscoring run, netting his ninth league goal of 2022 to help the Union complete a second-half comeback at home.

Moment of the Match: Gazdag’s penalty-kick finish capped off a rapid pair of goals for Jim Curtin’s attack, helping complete the comeback.

Match to Forget: Henry Kessler’s error in the box allowed to the Union’s penalty-kick attempt. Kessler’s needless push on Gazdag allowed the Union to take a 2-1 lead they would not relinquish.

Man of the Match: James Pantemis totaled four saves for CF Montreal in the win, delivering a Man of the Match performance for Wilfried Nancy’s squad.

Match to Forget: Ayo Akinola was basically invisible on the field, failing to register a shot on goal and only completing six passes and totaling 14 touches on the ball.

Man of the Match: Rafael Czichos played the hero for the Chicago Fire, netting the lone goal in the match and also winning four of his five duels defensively. Czichos was all over the field for the Fire, helping the hosts earn a statement win over the Sounders.

Moment of the Match: Jordan Morris came closest to tying things up for the Sounders, but his 88th minute shot was denied by Gabriel Slonina.

Match to Forget: Will Bruin got the nod in attack for the Sounders, but it was a night the veteran forward will not want to remember. Bruin lost a match-high eight duels and missed his only shot on goal, eventually being replaced before the hour mark.

Man of the Match: Emanuel Reynoso continued to be an MVP candidate for Minnesota United this season and the Argentine added to those hopes on Saturday with two goals in a needed home win over D.C. United.

Moment of the Match: Reynoso’s second-half goal helped the Loons pad their lead and truly sucked the sails out of D.C. United’s squad at Allianz Field.

Match to Forget: D.C. United struggled to get anything going offensively, but Michael Estrada did not help the visitors cause in his 87 minutes on the field. Estrada only registered 14 touches in the match and did not register a single shot on goal for the Eastern Conference visitors.

Man of the Match: Robert Taylor led Inter Miami’s comeback with an excellent individual goal to get things started. He had five total shots.

Moment of the Match: Emerson Rodriguez completed Inter Miami’s comeback with a goal in the third minute of stoppage time.

Match to Forget: Christian Fuchs failed to stop Robert Taylor from working on the right side for Miami. He seemingly gave up on the play in which Taylor scored a solo goal in the 59th minute.

Man of the Match: Diego Fagundez led the charge for Austin FC, with four key passes and the decisive equalizing goal. Fagundez managed to make his mark on an overall difficult night for Austin FC’s attack.

Moment of the Match: Diego Fagundez’ 79th-minute goal earned Austin a point on the road. Fagundez found the ball

Match to Forget: FC Dallas midfielder Edwin Cerrillo sprinted ahead, leaving him out of position when possession turned over as the play that led to Fagundez’ equalizer started. Cerrillo, who came in as a substitute, made a mistake as Dallas sought to defend the lead.

Man of the Match: Jonathan Lewis supplied assists on both goals, finding Diego Rubio in the middle of the field for the first goal and freeing Gyasi Zardes with a backheel.

Moment of the Match: Diego Rubio found a breakthrough in the 20th minute by scoring from just outside the 18-yard box.

Match to Forget: Galaxy right back Chase Gaspar had a difficult night. He was beat by Zardes early in the match, saved only by a goal-line clearance by Nick DePuy. He was also blown past by Lewis for the second goal.