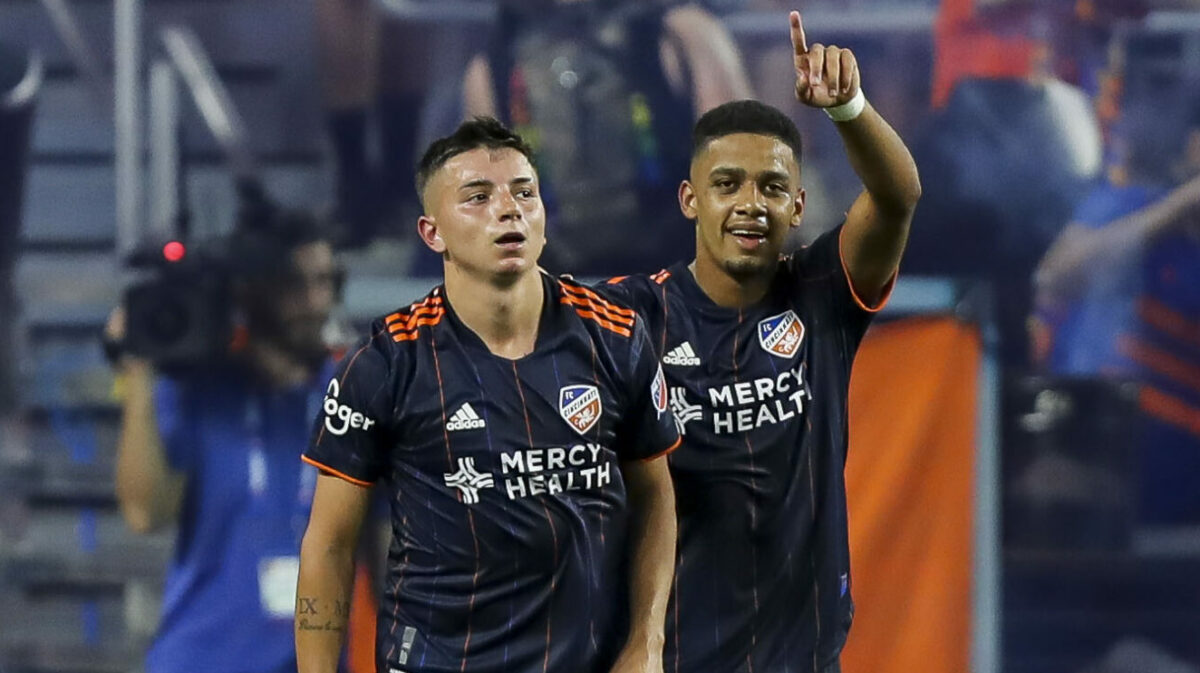 FC Cincinnati savored its first victory since late-June on Saturday night, knocking off the Eastern Conference leaders with a dominant second-half performance at TQL Stadium.

Pat Noonan’s side celebrated a 3-1 win over the Philadelphia Union, celebrating its first three points since June 24 and snapping the Union’s six-match unbeaten run. Brandon Vazquez, Brenner, and Alvaro Barreal all scored goals for FC Cincy, as the Ohio- based club earned their first win over the Union.

Gyasi Zardes stole the show for the Colorado Rapids, scoring a hat trick in a 4-3 win over Minnesota United. The U.S. men’s national team striker two goals in the opening 15 minutes for Robin Fraser’s squad before capping off his impressive night in the 61st minute at Dick’s Sporting Goods Park.

The Chicago Fire kept their strong run going on Saturday, downing Charlotte FC 3-2 at Bank of America Stadium to extend their unbeaten run to five matches. Kacper Przybylko scored a brace for Ezra Hendrickson’s bunch, which continued their surge up the league table.

Toronto FC used second-half goals from Federico Bernardeschi and Lorenzo Insigne to down Nashville SC 4-3 away from home. The Canadian club also received a first-half brace from veteran midfielder Jonathan Osorio. TFC is now unbeaten in four-straight while Nashville SC has failed to win in its last five.

Man of the Match: Thiago Almada was a live wire for Atlanta United on Saturday, winning the most duels and completing the most tackles in the dramatic late win on home soil.

Moment of the Match: Andrew Gutman came off the bench and scored the winning goal in the 95th minute, helping the Five Stripes claim an important three points.

Match to Forget: Jordan Morris totaled 90 minutes for the Sounders, but was ineffective in the loss.

Man of the Match: Kacper Przybylko hasn’t lived up to expectations in 2022 for the Fire, but took a major step in turning things around with two goals in Saturday’s road win.

Moment of the Match: Przybylko’s second goal of the match gave the Fire a second-half lead they would not relinquish.

Match to Forget: McKinze Gaines lost nine duels from his attacking position for Charlotte FC, being silenced in the defeat.

Man of the Match: Romell Quioto’s strong second-half of the season continued with two goals in Saturday’s home draw with Inter Miami.

Match to Forget: James Pantemis made two saves for CF Montreal, but will be frustrated after conceding late in the draw.

Man of the Match: Lucas Zelarayan added to his goal tally this season, scoring twice in a needed home result for the Crew over the defending MLS Cup winners.

Moment of the Match: Zelarayan’s second goal proved to be the winner as Caleb Porter’s side moved up to fifth in the East.

Match to Forget: Sean Johnson made one error in goal for NYCFC, which was a shock for the veteran goalkeeper.

Man of the Match: Cristian Casseres was all over the field for the Red Bulls, winning nine of 10 duels, completing two dribbles, and making 11 recoveries in the match.

Moment of the Match: In the only shot on goal in the match, Luquinhas was denied by Rafael Romo as both goalkeepers finished with clean sheets on the night.

Match to Forget: Martin Rodriguez lost 12 duels from his winger position for D.C. United, being held in check by Cameron Harper and Co.

Man of the Match: Alvaro Barreal scored once and assisted once, delivering a strong performance from his wide position in FCC’s attack.

Moment of the Match: Barreal’s goal truly sucked the sails out of the Union players, icing the victory for FC Cincy.

Match to Forget: Both Union forwards Mikael Uhre and Julian Carranza offered little in the final third, totaling two shots, but neither on goal.

Man of the Match: Veteran midfielder Tommy McNamara registered two assists in the road win, playing a key role with his distribution and leadership in Orlando.

Moment of the Match: Wilfrid Kaptoum’s early goal in the second half doubled the Revs advantage and continued to put Orlando City in trouble on home soil.

Match to Forget: Ruan struggled to deal with McNamara’s presence on the left side of the Revs attack, eventually being replaced in the 76th minute.

Man of the Match: Lorenzo Insigne scored the eventual winner for TFC, while also winning six duels and completing over 80% of his passes.

Moment of the Match: Insigne’s goal swung momentum back in TFC’s favor for good as Bob Bradley’s side claimed three points at Geodis Park.

Match to Forget: It was a rough night for Daniel Lovitz, who conceded one penalty kick, and was put under pressure by Federico Bernardeschi constantly in the match.

Man of the Match: William Abada’s first two MLS goals came at a crucial time for Sporting KC as the hosts claimed a needed three points over a fellow struggler in the West.

Moment of the Match: Just when it looked like the Galaxy were going to steal one point from Kansas City, Daniel Salloi’s 95th minute insurance goal sealed the win.

Match to Forget: Dejan Joveljic did not register a shot on goal for the Galaxy in the loss, while Chicharito shined on the other side of the attack.

Man of the Match: Sebastian Driussi was at it again for Austin FC, scoring twice to continue his MVP-caliber season.

Moment of the Match: Jeremy Ebobisse’s 13th league goal of 2022 helped the Quakes claim one point in one of MLS’ hostile atmospheres.

Match to Forget: It was a quiet night for Austin FC’s Alex Ring, losing seven duels and being booked once in the draw.

Man of the Match: Gyasi Zardes delivered his best performance since arriving in Colorado, scoring three goals and carrying the Rapids to three points.

Moment of the Match: Luis Amarilla’s late header missed wide of the Rapids goal, which ended up being the Loons final offensive look of the match.

Match to Forget: Dayne St. Clair had a shocking performance, as two of his errors led to Rapids goals.

Man of the Match: Christian Arango is heating up at the right time for LAFC as the in-form striker scored twice in an impressive road win in Utah.

Moment of the Match: Arango’s second goal was the nail in the coffin for RSL as LAFC rolled.

Match to Forget: The centerback pair of Justen Glad and Marcelo Silva only won three duels combined in the match for RSL as Arango netted two goals against them.

Man of the Match: Maarten Paes made four saves for FC Dallas, helping Nico Estevez’s side claim one point in Portland.

Moment of the Match: Just when the Timbers thought they had the match won, Diego Chara’s own goal helped FC Dallas walk away with one point.

Match to Forget: Jaroslaw Niezgoda played 65 minutes for the Timbers, but you wouldn’t have guessed with his 11 touches and zero shots in the match.