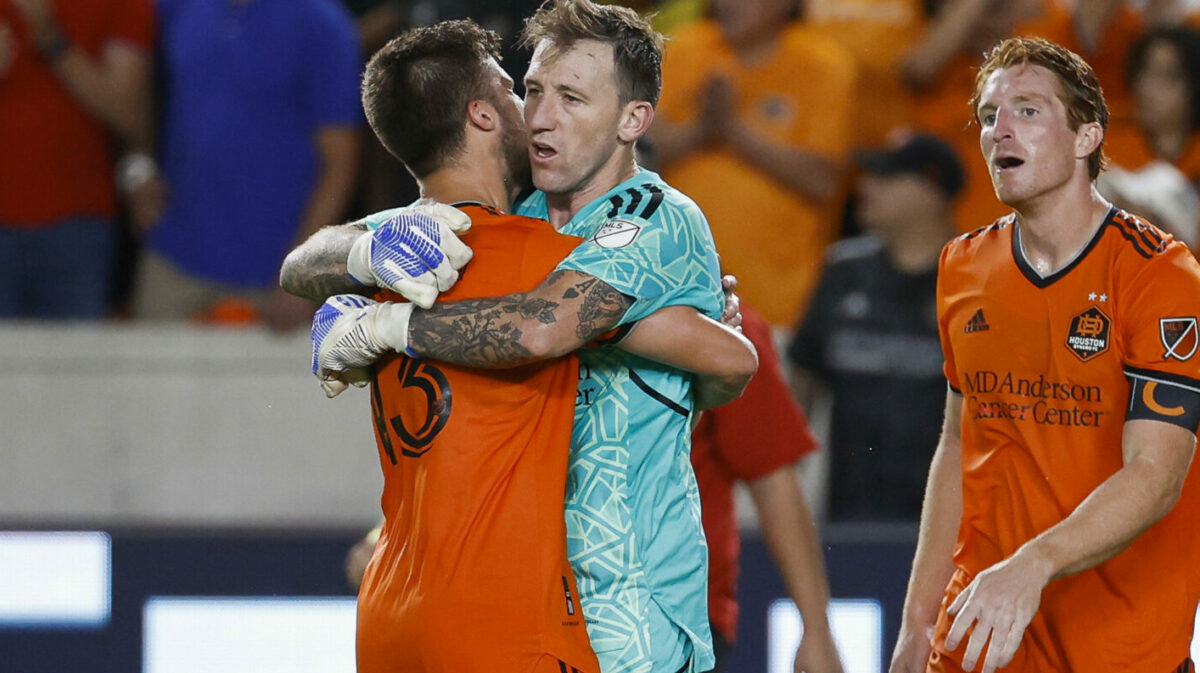 LAFC’s grip at the top of both the Supporters’ Shield and Western Conference race took another major blow on Wednesday with Steve Cherundolo’s side suffering a third-straight loss.

The Houston Dynamo used a second-half winner from Griffin Dorsey to down LAFC 2-1 at BBVA Stadium, earning a first-ever victory over the West leaders in the process. It was the Dynamo’s first victory in their past six matches, keeping their slim playoff hopes alive in the process.

Carlos Ferreira and Cristian Arango traded goals in the opening 20 minutes while Gareth Bale was denied on several occasions by Steve Clark and the Dynamo backline later in the match. Dorsey’s goal in the 75th minute proved to be the difference as LAFC now find itself level with the Philadelphia Union atop the Supporters’ Shield race at 57 points apiece.

The New York Red Bulls moved right behind CF Montreal for second place in the Eastern Conference following a 1-0 road victory over the Canadian club at Stade Saputo. Lewis Morgan’s 13th league goal of the season was all Gerhard Struber’s men needed to claim a third win out of their past four matches.

The Philadelphia Union made it three-straight wins after rolling past Atlanta United 4-1 at Subaru Park. Julian Carranza, Mikael Uhre, and Daniel Gazdag all continued their impressive campaigns for the Union while Nathan Harriel added his first MLS goal to cap off a dominant performance.

Orlando City’s dramatic finishes over the past few weeks continued on Wednesday with Kyle Smith’s 91st minute winner downing the Seattle Sounders in a 3-2 result at Exploria Stadium. Just four days after using a 96th minute winner from Tesho Akindele to defeat New York City FC, the Lions flexed their muscles again to move seven points clear of the red line in the East.

Caleb Porter’s Columbus Crew extended their unbeaten run to five matches following a 1-0 home win over Inter Miami. It was the Crew’s second home win out of their past six tries, leapfrogging the Herons in the process up to sixth place. Inter Miami sit in seventh place following back-to-back defeats.

D.C. United claimed a 2-1 road win over NYCFC at Red Bull Arena as Christian Benteke made his club debut in the process. Nashville SC rolled past the Colorado Rapids by a 4-1 scoreline while Real Salt Lake also earned a convincing win over Minnesota United at home.

Here is a closer look at Wednesday’s MLS results:

Man of the Match: Mikael Uhre scored once and assisted once to help spring the Union attack to their third-straight win and performance with four goals or more.

Moment of the Match: Daniel Gazdag’s finish in the 67th minute truly iced the win for the Union before Nate Harriel’s first MLS goal was the icing on the cake.

Match to Forget: Alan Franco and Juan Purata both failed to deal with the dynamic movement of Julian Carranza and Mikael Uhre for the Union, watching as both scored goals in the defeat for Atlanta United.

Man of the Match: Lewis Morgan played the hero role for the New York Red Bulls once again, scoring his 13th goal of the season and also creating the most chances in the match (2).

Moment of the Match: Romell Quioto came closest to helping CF Montreal earn one point at home, but was unable to get his stoppage-time effort on goal.

Match to Forget: The duo of Quioto and Joaquin Torres totaled one combined shot on goal, struggling to get after the Red Bulls backline.

Man of the Match: Luis Diaz played like a man possessed on Wednesday, scoring the breakthrough goal for the Crew. He also won nine of 12 duels, drew the most fouls (4), and registered two shots on goal in the win.

Moment of the Match: Diaz’s finish just after the hour mark was all the Crew needed to pick up an important three points at home.

Match to Forget: Gonzalo Higuain failed to offer much in the final third, having only 34 touches in the match, registering zero shots on goal, and losing six of 10 duels.

Man of the Match: Gabriel Slonina made five saves to preserve a road clean sheet for the Fire, continuing to impress as the No. 1 for Chicago.

Moment of the Match: Henry Kessler’s stoppage-time header was denied by Slonina to help the Fire hang on at Gillette Stadium.

Match to Forget: Chris Mueller had a forgettable night, missing one penalty kick opportunity, and losing 10 of his 13 duels.

Man of the Match: Joao Moutinho delivered a strong shift at left back for Orlando City, assisting once, winning four duels, and creating four chances.

Moment of the Match: Kyle Smith came off the bench and scored the go-ahead goal for the Lions, giving Oscar Pareja’s bunch a fourth-straight win.

Match to Forget: Jordan Morris conceded one penalty kick opportunity, lost a match-high seven duels, and failed to register a shot on goal in the Sounders loss.

Man of the Match: Riqui Puig was all over the field for the Galaxy, scoring the tying goal, competing 70 of his 78 passes, and winning all four of his duels.

Moment of the Match: Puig’s missile into the top corner of Alex Bono’s net helped the Galaxy steal one point at BMO Field.

Match to Forget: Lorenzo Insigne endured a frustrating night for Toronto FC, missing all four of his shots, losing four duels, and failing to be impactful in the final third.

Man of the Match: Steve Birnbaum hasn’t scored the game-winning goal for D.C. United often in his career, but got to savor that opportunity in Wednesday’s victory over NYCFC.

Moment of the Match: David Ochoa made a huge game-saving stop on Gedion Zelalem in the 95th minute to help preserve the win for D.C. United.

Match to Forget: Santiago Rodriguez was forced into the No. 10 role once again for NYCFC, but offered little-to-nothing offensively.

Man of the Match: Adalberto Carrasquilla was excellent for the Dynamo in midfield, winning six of his seven duels, competing four dribbles, and creating the most chances (5).

Moment of the Match: Just before the Dynamo grabbed a 2-1 lead, Gareth Bale was denied by Steve Clark right after Ryan Hollingshead struck the crossbar with a header.

Match to Forget: Ilie Sánchez has been golden for LAFC most of the season but he conceded an early penalty kick and struggled to rebound in an off-night performance for the veteran.

Man of the Match: Hany Mukhtar’s MVP push continued on Wednesday with the German scoring a hat trick to propel Nashville SC to three points. Mukhtar now has 19 goals and seven assists in 28 league appearances for Gary Smith’s side.

Moment of the Match: Jacob Shaffelburg’s goal gave Nashville SC some breathing room before Mukhtar capped his hat trick later in the second half.

Match to Forget: Lucas Estevez lost the most duels (7), conceded one penalty kick, and ultimately struggled to deal with the in-form Mukhtar on his side of the field.

Man of the Match: Jefferson Savarino scored the second goal in RSL’s home win while also creating the most chances (2) and completing 93% of his passes.

Moment of the Match: Anderson Julio’s second-half finish truly capped off a dominant night for RSL and a miserable one for Minnesota United.

Match to Forget: The entire Minnesota United backline looked out of sync against Savarino and Sergio Cordova, failing to deal with the constant pressure of RSL’s attackers.

Man of the Match: Sebastian Driussi did everything he could to propel Austin FC to three points and although the result fell shot, the Argentine still was Man of the Match. Driussi scored once, won 14 duels, hit the crossbar once, and drew five fouls.

Moment of the Match: Zac McGraw’s goal proved to be the deciding finish between the two teams from Q2 Stadium.

Match to Forget: Sebastian Blanco was quiet, losing all four his duels, and completing less than 60% of his passes.